My Haptics Quest: How Will Our Hands Enter the Metaverse? 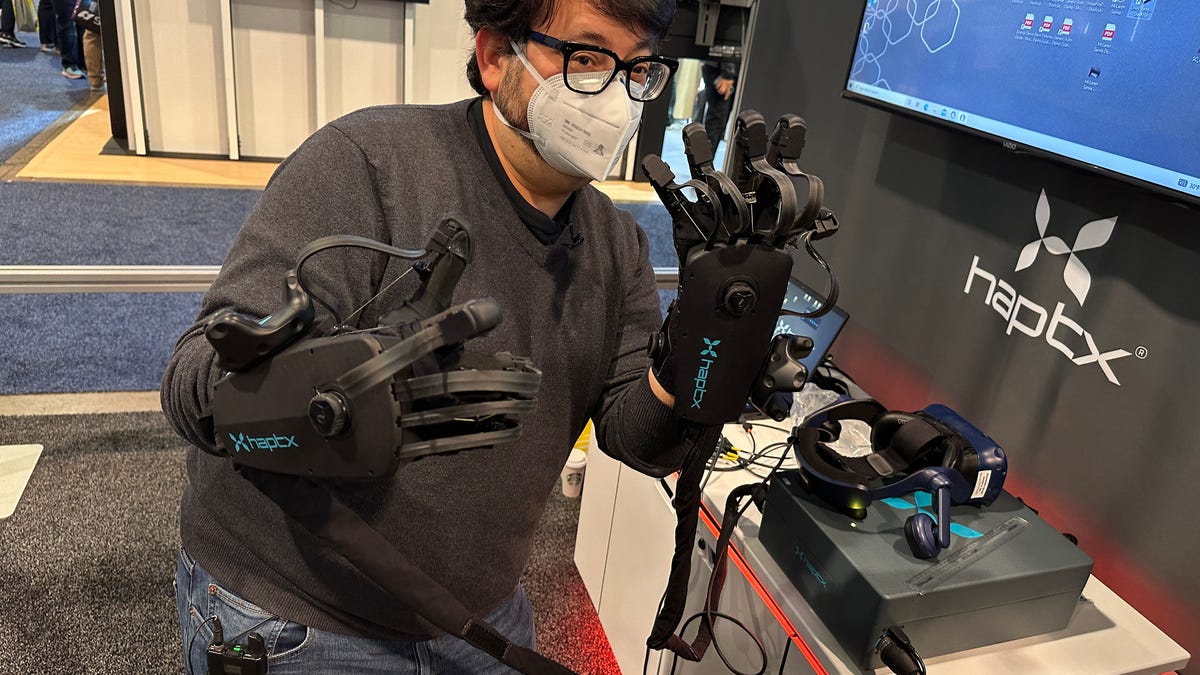 Trying out HaptX haptic gloves in Las Vegas: these are considered the best, but they’re absolutely huge.
Scott Stein/CNET

I put my hands out flat and loaded them into a pair of gloves loaded with joints, cables, pumps and tightening straps. All of this, connected to a backpack-size box that helped pump pressure around my fingers and create sensations of touching things. I was about to play Jenga in VR using an $80,000 pair of haptic gloves made by HaptX.

The future of the metaverse, or how we’ll dip into virtual worlds, seems to involve VR and AR, sometimes. If it does, it’ll also mean solving what we do with our hands. While companies like Meta are already researching ways that neural input bands and haptic gloves could replace controllers, none of that is coming for years. In the meantime, is there anything better than the VR game controllers already out there or basic camera-based hand tracking? I’ve tried a couple of haptic gloves before, but I was ready to try more.

I poked around CES in Las Vegas to get some experiences with devices I hadn’t tried before, and it suddenly hit me there’s already a spectrum of options. Each of them was a little revelation.

Jenga With HaptX Gloves Threw My Hands Into Virtual Reality

HaptX has been recognized for years as one of the best haptic gloves products on the market, but I never got a chance to experience them. The hardware is highly specialized and also extremely large and expensive. I wish I’d gotten a chance to see them at the last CES I attended before this in 2020. Finally, in 2023, I got a chance.

The gloves use microfluidics, pumping air into small bladders that create touch sensations in 133 zones per hand across the fingers and palm. At the same time, cables on the backs of the fingers pull back to simulate up to 8 pounds of force feedback. Used with apps that support them, you can reach out, grab things and actually feel them. 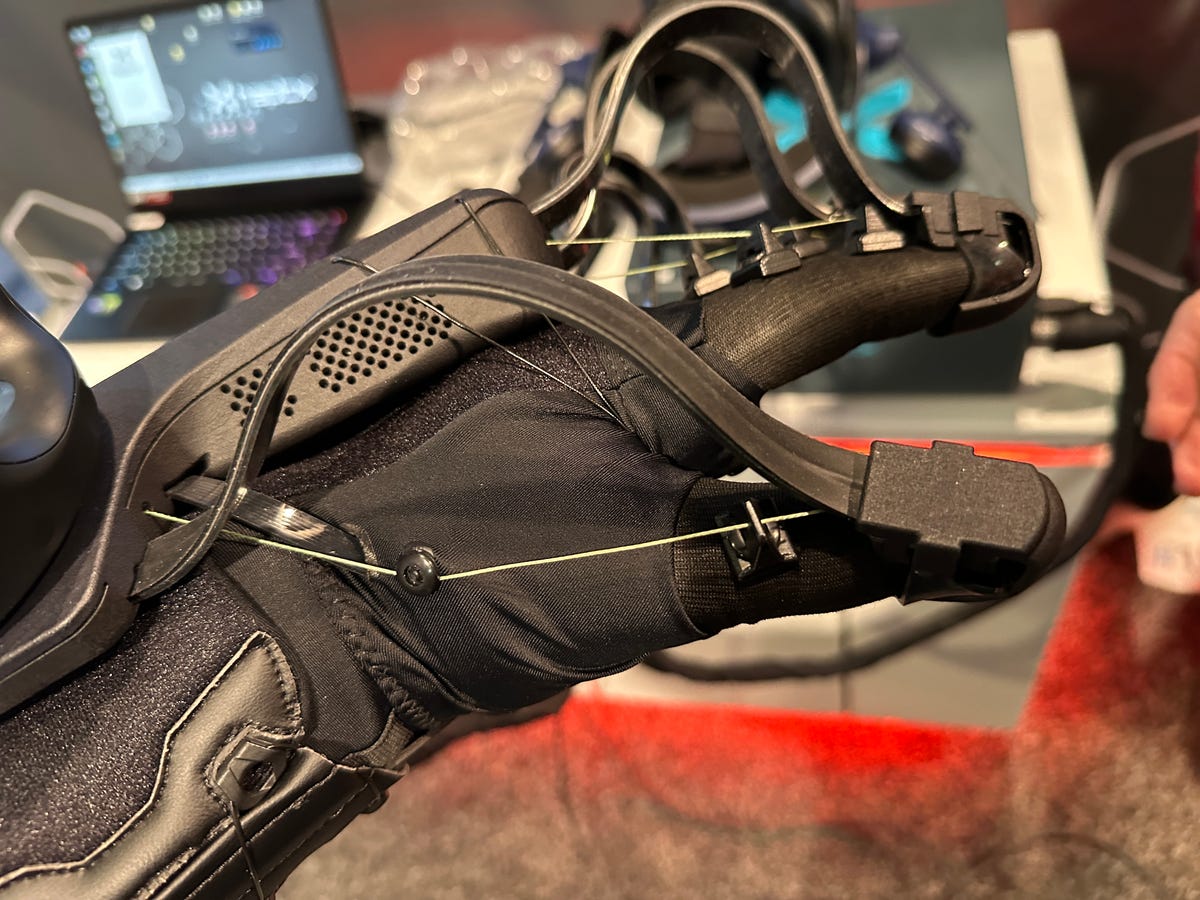 A close-up of the mechanisms on HaptX’s gloves.

I’ve tried lower-cost haptic gloves at home that didn’t have the air bladders but did have cables to apply resistance. The HaptX gloves are a big step forward and the most eerily realistic ones I’ve ever tried. I wouldn’t say everything “felt real,” but the poking finger-feelings I had in my fingers and palms let me feel shapes of things, while the resistance gave me a sense of grabbing and holding stuff.

The most amazing moments were when I placed objects on my palm and seemed to feel their weight. Also, when another person’s finger virtually touched mine. Another journalist was in another VR headset with haptic gloves playing Jenga next to me. We never made contact, but occasionally we shook hands virtually or gave high-fives. Our fingers touching felt…well, oddly real, like sensing someone’s finger touching your glove.

HaptX is making another pair of smaller, more mobile gloves later this year that cost less (about $5,000) while still promising the same level of feedback, plus tactile vibrations like the haptic buzzes you might feel with game controllers. I didn’t get to demo that, but I can’t wait.

While HaptX’s tech is wild, it’s meant for industrial purposes and simulations. It represents actual reality, but it’s so massive that it wouldn’t let me do anything else other than live in its simulated world. For instance, how would I type or pull out my phone? Still, I’ll dream of interfaces that let me feel as immersed as these gloves can accomplish.

At $300, bHaptics’ yellow haptic gloves are far, far less expensive than HaptX. They’re also completely different. Instead of creating pressure or resistance, all they really do is have various zones inside that electrically buzz, like your phone, watch or game controller, to sync up with moments when your fingers in VR would virtually touch something. Strangely, it’s very effective. In a few demos I tried, pushing buttons and touching objects provided enough feedback to feel like I was really “clicking” a thing. Another demo, which had me hug a virtual avatar mirroring my movements or shake hands, gave enough contact to fool me into feeling I was touching them. 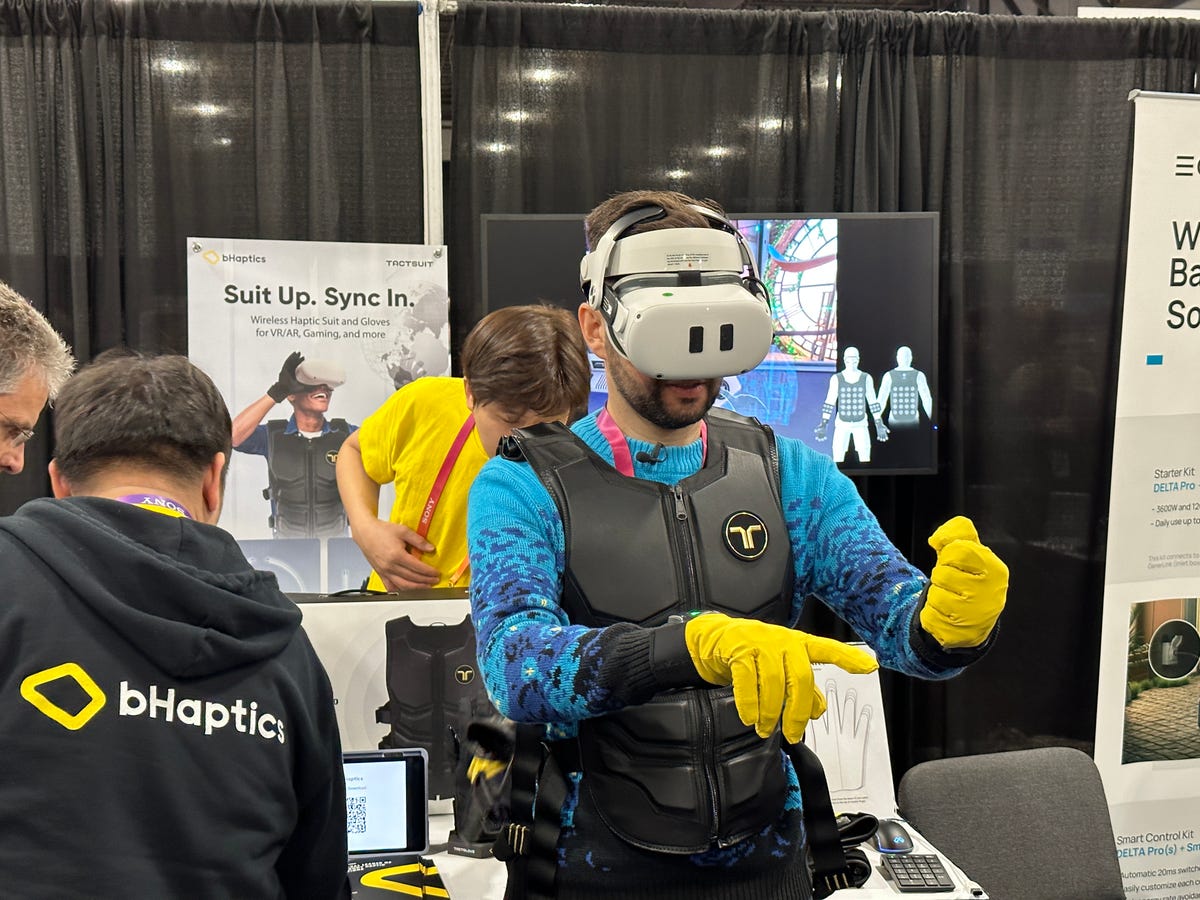 Someone trying the TactGloves and TactSuit with a Meta Quest 2. I demoed the tech as well (watch the video).

bHaptics also makes a haptic vest I tried called the TactSuit that vibrates with feedback with supported games and apps. There aren’t many apps that work ideally with haptic gloves right now, because no one’s using haptic gloves. But bHaptics’ support of the standalone Meta Quest 2, and its wireless Bluetooth pairing, means they’re actually portable…even if they look like giant janitorial cleaning gloves. The tradeoff with being so small and wireless is their range is short. I had to keep the gloves within about two feet of the headset, otherwise they’d lose connection.

The buzzing feedback didn’t prove to me that I could absolutely reach into other worlds, but they offered enough sensation to make hand tracking feel more precise, Instead of wondering whether my hand gestures had actually contacted a virtual object, I could get a buzzing confirmation. The whole experience reminded me of some sort of game controller feedback I could wear on my fingers, in a good way. 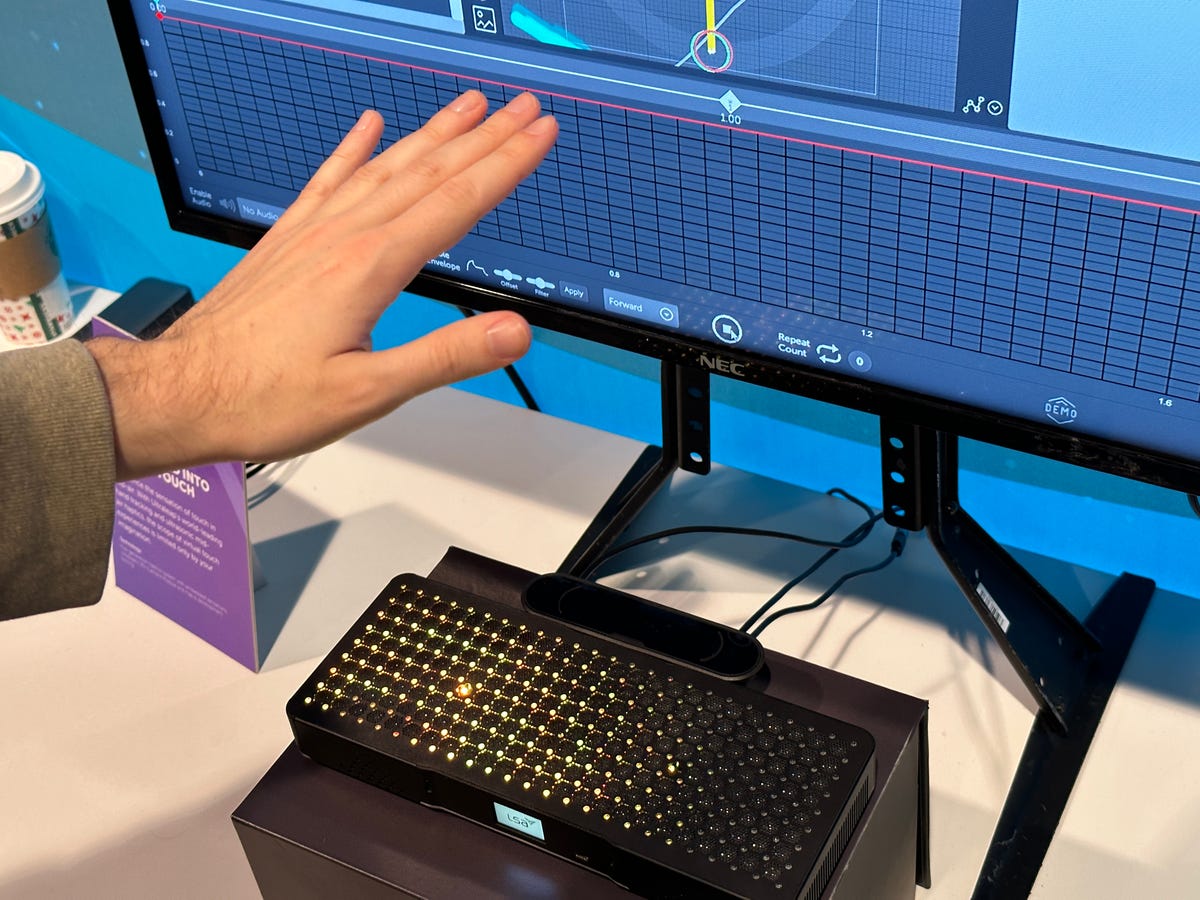 Holding a hand over Ultraleap’s ultrasonics to feel air vibrations that can provide a motion-controlled buzz.

No Gloves At All: Ultraleap’s Ultrasonics

Ultraleap, a company that’s specialized in hand tracking for years, has a different approach to haptics: sensations you can feel in the air. I waved my hand above a large rectangular panel and felt ripples and buzzes beneath my fingers. The feelings are created with ultrasonic waves, high-powered sound bursts that move air almost like super-precise fans against your fingers. I tried Ultraleap’s tech back in 2020, but trying the latest and more compact arrays this year made me think about a whole new use case. It was easy to make this logic leap, since Ultraleap’s booth also demonstrated hand tracking (without haptic feedback) on Pico Neo 3 and Lynx R1 VR and mixed reality headsets.

What if…this air vibration could be used for headsets? Ultraleap is already dreaming and planning for this solution, but right now ultrasonic tech is too power hungry, and the panels too large, for headgear. The tech is mainly being used in car interface concepts, where the hand gestures and feedback could make adjusting car controls while driving easier to use and less dangerous or awkward. The range of the sensations, at least several feet, seem ideal for the arm length and radius of most existing camera-based hand tracking tech being used right now on devices like the Meta Quest 2.

I tried a demo where I adjusted a virtual volume slider by pinching and raising the volume up and down, while feeling discrete clicks to let me know I was doing something. I could feel a virtual “bar” in the air that I could feel and perhaps even move. The rippling, subtle buzzes are far more faint than those on haptic gloves or game controllers (or your smartwatch), but they could be just enough to give that extra sense that a virtual button press, for instance, actually succeeded…or that a gesture to turn something on or off was registered.

If these interfaces move to VR and AR, Ultreleap’s representatives said they’d likely end up in larger installations first: maybe theme park rides. Ultraleap’s tech is already in experiences like the hands-free Ninjago ride at Legoland, which I’ve tried with my kids. The 3D hand-tracking ride lets me throw stars at enemies, but sometimes I’m not sure my gestures were registered. What if buzzing let me know I was making successful hits? 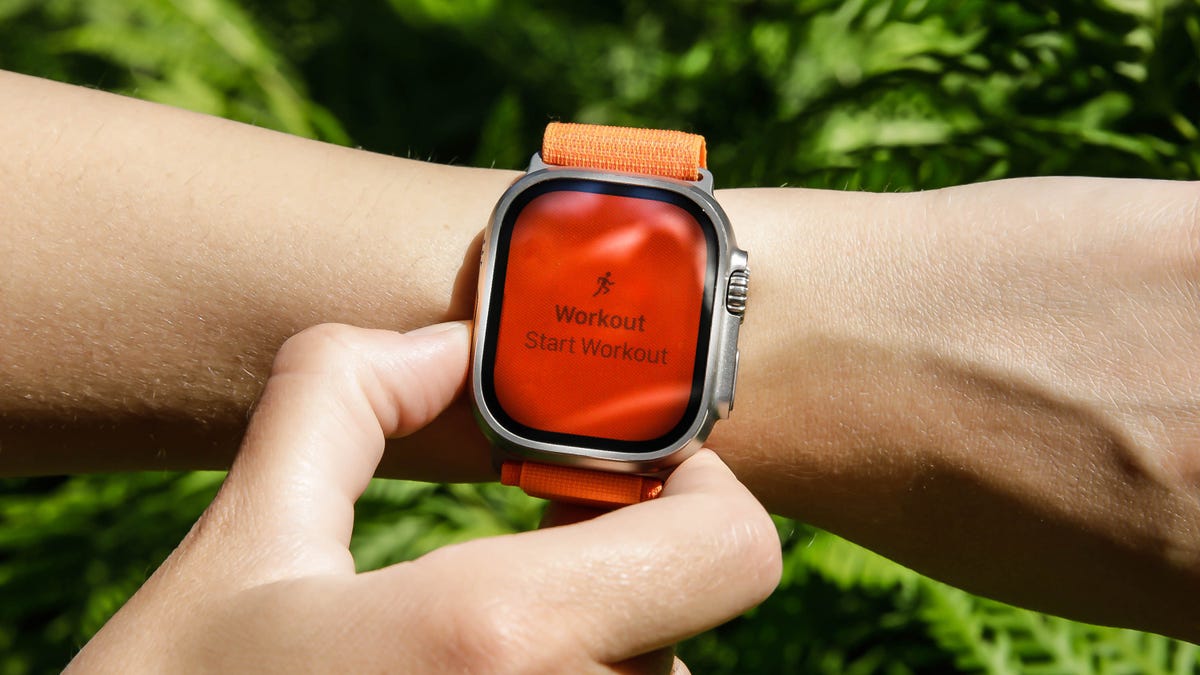 The Apple Watch, and other smartwatches, already have haptics. When will they work with AR and VR?

Haptics are likely to come from stuff we already wear

Of course, I skipped the most obvious step for AR and VR haptic feedback: smartwatches and rings. We wear buzzing things on our wrists already. Apple’s future VR/AR device might work with the Apple Watch this way, and Meta, Google, Samsung, Qualcomm, and others could follow a similar path with dovetailing products. I didn’t see any wearable watch or ring VR/AR haptics at CES 2023 (unless I missed them). But I wouldn’t be surprised if they’re coming soon. If AR and VR are ever going to get small enough to wear more often, we’re going to need controls that are far smaller than game controllers…and ways to make gesture inputs feel far less weird. Believe the buzz: haptics is better than you think.