Former Palace aides have remained silent despite sticking with their Meghan Markle bullying allegations – and royal experts believe the Duchess of Sussex should be thankful.

Royal author Valentine Low, who wrote the book “Courtiers: Intrigue, Ambition, and the Power Players Behind the House of Windsor,” told Page Six on Thursday that the palace staff who quit are standing by their claims.

“The people I spoke to are absolutely still sticking to their story, claiming that Meghan bullied them,” Low alleged to the outlet. “I can’t speak to the truth of that, of course, because I wasn’t in the room and I haven’t heard Meghan’s side. But my sources still very much stick to their story.” 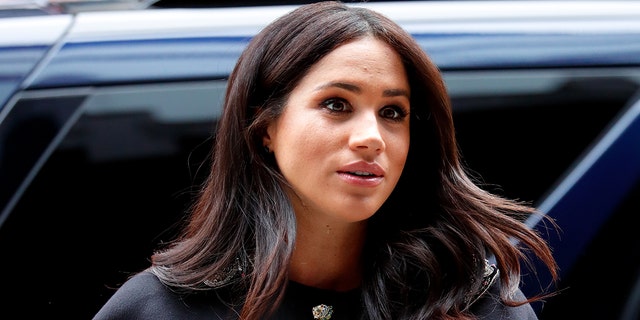 In 2021, the Times of London published a report stating that former palace staff had accused the Duchess of Sussex of bullying before she made her exit with Prince Harry in 2020.
(Photo by Max Mumby/Indigo/Getty Images)

A spokesperson for the Duchess of Sussex didn’t immediately respond to Fox News Digital’s request for comment.

“I’ve heard that the staff who complained were made to sign NDAs by the palace, so they are unable to speak publicly,” royal commentator Jonathan Sacerdoti told Fox News Digital. “Meghan and Harry, on the other hand, signed massive commercial deals to explain their version of events to a mass audience. If the palace decided to release former staff from their NDAs, it might be seen as an aggressive move towards Meghan and Harry, but if they are not released Meghan and Harry’s counterclaims can’t be rebutted directly by the alleged victims of bullying themselves.”

“… This is an example of the palace stopping former staff members from being able to speak out openly and publicly about their own experiences, which we can assume might be very damaging for the ex-working royals,” he noted. 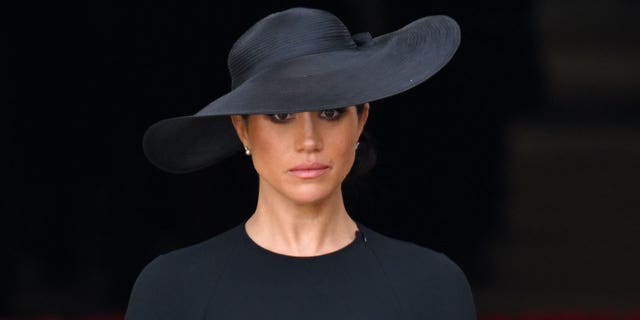 In 2022, Buckingham Palace announced that it had investigated how the taff had handled allegations of bullying made against the Duchess of Sussex — but the findings will remain private.
(Photo by Karwai Tang/WireImage via Getty Images)

In June, Buckingham Palace announced that it had investigated how the staff had handled allegations of bullying made against the former American actress. However, those findings will remain private.

According to palace officials, the details of the independent review were not being released, to protect the confidentiality of those who took part. Current and former staff were invited to speak about their experiences of working for the 41-year-old after claims surfaced in 2021 about her bullying several members of staff.

Following the review, officials said the palace’s human resources policy had been updated, but the palace declined to say what the changes were. 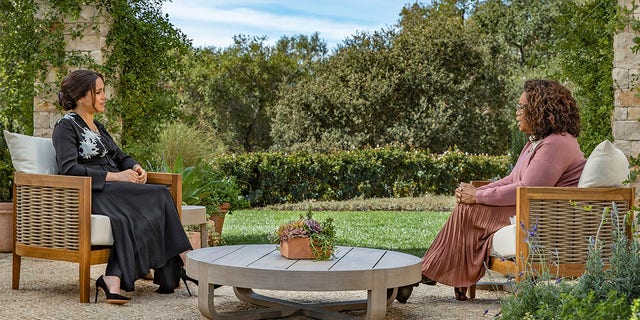 Buckingham Palace launched the investigation in March 2021 after reports alleged that the former “Suits” star had driven out two personal assistants and that staff had been “humiliated” on several occasions during her time living in Kensington Palace. The claims were published by the Times of London days before the Duke and Duchess of Sussex sat down with Oprah Winfrey for their televised interview.

Markle’s lawyers denied the bullying allegations when they were made. At the time, a spokesperson for the duchess said that the claims were the “latest attack on her character.”

Royal expert Shannon Felton Spence told Fox News Digital that her sources are also “very much sticking to their story.” 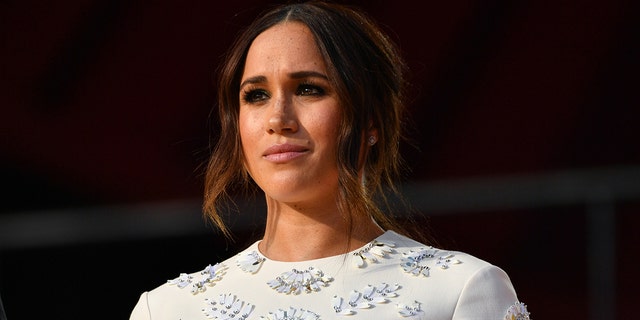 Author Valentine Low alleged that those who have accused the Duchess of Sussex of bullying are sticking to their guns.
(Photo by NDZ/Star Max/GC Images)

“They say the complaints originated from the treatment of the staff,” said Felton Spence. “Not made up by the press or from other sources. The palace is still very much protecting the Sussexes by not releasing the report. Or not releasing the staff from their NDAs. Why are they protecting the Sussexes? That’s the question. One can only assume it’s because they are family, and they are trying to keep negative stories at bay.”

In Harry’s memoir “Spare,” which was published on Jan. 10, the 38-year-old insisted that his wife was an exemplary boss who “checked on staff who were ill, sent baskets of food or flowers or goodies to anyone struggling, depressed, off sick.” She also “bought pizza and biscuits, hosted tea parties and ice cream socials.” 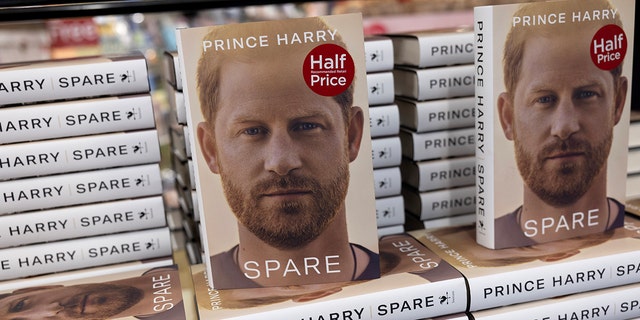 Prince Harry’s book, ‘Spare,’ went on display in a branch of WH Smith opposite Windsor Castle on January 10, 2023, in Windsor, England.
(Photo by Dan Kitwood/Getty Images)

Royal commentator Hilary Fordwich pointed out to Fox News Digital that before the Duchess of Sussex, there were no “weeping staff members nor anyone quitting,” as reports suggested.

SHARON OSBOURNE CLAIMS ‘AMERICA BLACKLISTED HER,’ FORCED HER TO RETURN TO UK AMID HARRY AND MEGHAN DRAMA

“Prince William and [his wife] Catherine have only had one nanny since the birth of Prince George,” she explained. “[The Prince and Princess of Wales] went to Merseyside to visit Liverpool University Hospital, where they were seen carrying on with royal duties. They were focused on healthcare workers, and they are demonstrating that dedication to service despite distractions is the order of the day. They even took a selfie with a nurse, unveiled a plaque, and then went on to a charity for mental health services for young people.”

“So, we know they are serving others versus focusing on themselves,” said Fordwich. “Perhaps this contrast of actions gives validation to those who see them as lovely, giving people.” 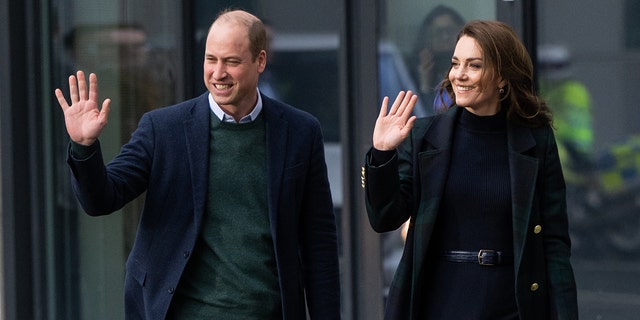 Prince William, the Prince of Wales, and Catherine, Princess of Wales, during their visit to Royal Liverpool University Hospital on January 13, 2023, in Liverpool, England.
(Photo by Samir Hussein/WireImage)

Markle became the Duchess of Sussex when she married the British prince in 2018. The couple quit royal life in 2020. At the time, they cited what they saw as the media’s racist treatment of the duchess and a lack of support from the palace. They now reside in Montecito, California, with their two children.

“Harry and Meghan’s defenders say the palace released information about the bullying complaints just ahead of the Oprah interview to try to undermine the couple’s credibility,” said Sacerdoti. “But that doesn’t detract from the central point that former staff is said to have felt bullied by Meghan. The timing of the press reports doesn’t change the important fact of what was alleged. Meghan denies bullying, but I think that many think it is at least a believable possibility, because she is seen by many as a determined person who has been willing to cut off members of her own family for perceived failings. So why would she be any different with her staff?”

“Far from throwing the Duke and Duchess of Sussex under the bus, the palace said it would not publish the findings of an internal investigation into the bullying allegations, a decision which would protect Harry and Meghan from any damaging outcomes,” he continued. ” . . . Ultimately, none of us were there, so none of us can know what happened, and we are relying on varying reports. But there seems to be a growing sense that Meghan and Harry feel everyone was out to get them: the press, the royal family, their relatives, their own staff and communications team . . . everyone. So with incomplete information, the public has to make up its own mind.” 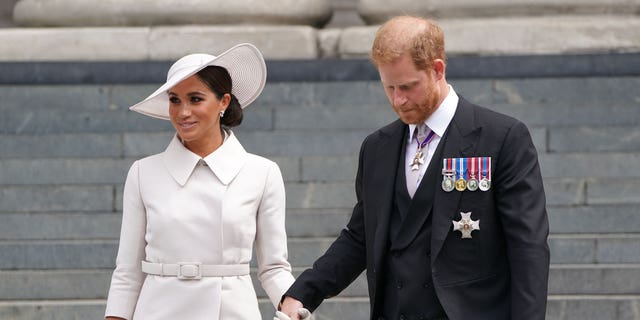 The Duke and Duchess of Sussex reside in California with their two children.
(Photo by Chris J Ratcliffe)

Low told the outlet that the couple’s exit turned out to be a good thing – for both sides.

” . . . I think they behave like teenagers, I think they’re blinkered, they’re stubborn,” he said. “They didn’t engage well with the royal family. Also, I think, the royal household, in general, is an institution that didn’t handle it well, because they didn’t see it coming. It could have been done so much more amicably. It didn’t have to be like this.”