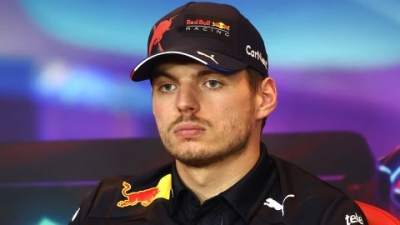 Verstappen addressed online abuse at a press conference ahead of the Abu Dhabi Grand Prix.

Max Verstappen and Red Bull have hit out at online threats and abuse leveled at the world champion and his family after he ignored team orders at last weekend’s São Paulo Grand Prix.

Verstappen refused his team’s instruction to allow teammate Sergio Perez through on the final lap of the race in Brazil. Perez said he previously allowed the Dutchman to overtake on his understanding that his position in the race would be returned.

“I was told to let him by, that I was going to get back the position,” Perez told Sky Sports at the weekend, having earlier said that Verstappen’s actions showed “who he really is.” 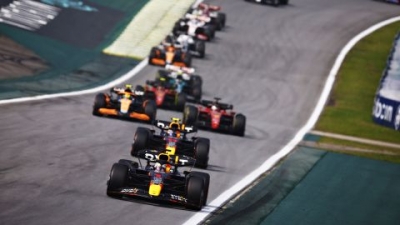 Double F1 world champion Verstappen addressed the controversy Thursday, saying: “After that race of course I looked very bad in the media.

“But also they didn’t have the clear picture. To immediately put me down like that is pretty ridiculous. They don’t know how I work within the team and what the team appreciates about me. All the things that I’ve read are pretty disgusting.”

He added that on social media, people “started attacking my family.”

“They were threatening my sister, my mum, my girlfriend, my dad. And for me that goes way too far. If you have a problem with me, that’s fine. But don’t go after my family because that is just unacceptable.

“When your own sister writes to you that it’s getting way too much and you have to do something about it, I think that says enough,” he added. “And then it does get to me because you cannot attack my family.”

Red Bull addressed the comments in a statement Thursday, saying: “The abusive online behaviour towards Max, Checo, the Team and their respective families is shocking and saddening and unfortunately is something that we as a sport are having to address with depressing regularity. There is no place for it in racing or society as a whole and we need to do and be better.

“At the end of the day this is a sport, we are here to race. Death threats, hate mail, vitriol towards extended family members is deplorable. We value inclusion and want a safe space for everyone to work in and enjoy our sport. The abuse needs to stop.”

Verstappen also addressed the controversy over the weekend’s race

“It wasn’t about the position … It was about something that happened earlier in the season,” he said on Thursday.

“I already explained that in Mexico and the team understood and agreed.

“We went to Brazil and I just thought we were just going to race and try to get the best possible result. We had a bit of a miscommunication on Saturday and Sunday, nothing had been said to me about a potential swap.” 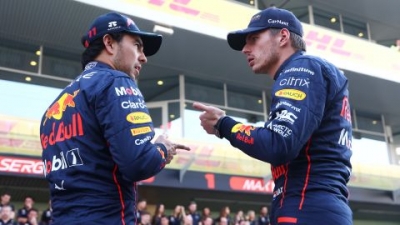 Verstappen and Perez have both confirmed issues have been resolved internally.

Red Bull admitted the situation had not been handled appropriately and added in its statement that the issue had been resolved in private.

“As a team we made some mistakes in Brazil. We had not envisaged the situation that unfolded on the last lap and we had not agreed a strategy for such a scenario before the race,” the team said.

It added that Verstappen was only told to give up position at the final corner “without all the necessary information being relayed.”

“This put Max, who has always been an open and fair team player, in a compromising situation with little time to react which was not our intention,” the statement continued.

“Following the race Max spoke openly and honestly, allowing for both drivers to resolve any outstanding issues or concerns. The Team accept Max’s reasoning, the conversation was a personal matter which will remain private between the team and no further comment will be made.”

Perez told Sky Sports that the issue had been discussed internally, adding “we are ready to move on as a team.”