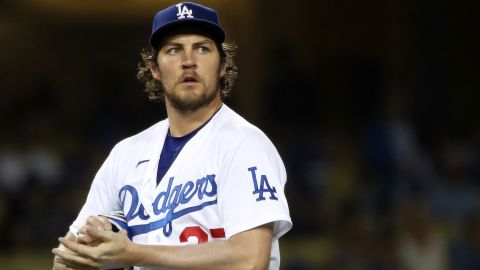 The former Cy Young award winner was previously suspended by Major League Baseball for violating the league’s joint domestic violence, sexual assault, and child abuse policy, but was reinstated last month when an arbitrator reduced his suspension from 324 games to 194, effective immediately.

Bauer has not played since June 2021, after a San Diego woman claimed he had sexually assaulted her. The pitcher, whom a prosecutor in Los Angeles declined to charge with a crime, has denied the sexual assault allegations and maintained his encounters with the woman were consensual.

“The Dodgers organization believes that allegations of sexual assault or domestic violence should be thoroughly investigated, with due process given to the accused,” the team said in a statement Friday. “From the beginning, we have fully cooperated with Major League Baseball’s investigation and strictly followed the process stipulated under MLB’s Joint Domestic Violence, Sexual Assault and Child Abuse Policy.

The team said “two extensive reviews of all the available evidence in the case,” performed by MLB Commissioner Rob Manfred and another by a neutral arbitrator, “concluded that Mr. Bauer’s actions warranted the longest ever active player suspension in our sport for violations of this policy. Now that this process has been completed, and after careful consideration, we have decided that he will no longer be part of our organization.”

Bauer said on Twitter on Friday that he talked to “Dodgers leadership” in Arizona on Thursday and he was told they wanted him to pitch there next season.

“While I am disappointed by the organization’s decision today, I appreciate the wealth of support I’ve received from the Dodgers clubhouse,” he wrote. “I wish the players all the best and look forward to competing elsewhere.”

CNN Sports has reached out to the Dodgers for further comment

Bauer was placed on administrative leave by the league in July 2021 and in April he was suspended for 324 games. But on December 22 an arbitrator reduced the suspension, making him eligible to play next season.

At the time his attorneys – Jon Fetterolf, Shawn Holley, and Rachel Luba, – said: “While we are pleased that Mr. Bauer has been reinstated immediately, we disagree that any discipline should have been imposed. That said, Mr. Bauer looks forward to his return to the field, where his goal remains to help his team win a World Series.”

According to league rules, the Dodgers had 14 days from reinstatement – until Friday – to decide whether to put Bauer back on the team’s 40-man roster.

According to the team website, Bauer was designated for assignment, which means a player can be traded or released within seven days. If Bauer was released, any of the other 29 teams can sign him.