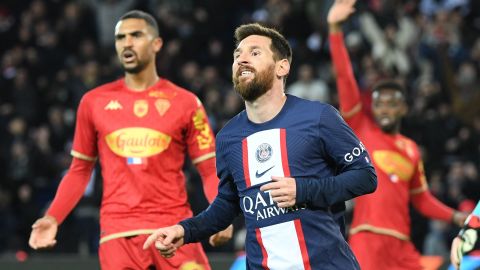 Lionel Messi celebrated his return to Paris Saint-Germain with a goal in his first game back since lifting the World Cup.

The 35-year-old only returned to training in the new year after taking some time off to celebrate and recuperate after Qatar 2022, where he finally won the trophy that had always eluded him in one of the greatest finals ever.

But the forward didn’t look to be suffering any hangover as he returned to action with a goal from close range in PSG’s 2-0 win against Angers on Wednesday.

Messi also paid tribute to Pelé before the match, joining his teammates in wearing a t-shirt with the Brazilian’s face on it during the warmup.

PSG sits comfortably top of the league despite Christophe Galtier having to switch up his team as he eases players back in after the World Cup.

Kylian Mbappé, a beaten finalist in Qatar, was rested for Wednesday’s match, allowing the likes of youngster Hugo Ekitiké to get some game time.

The 20-year-old forward has impressed when given the chance this season and opened the scoring with a sweeping finish in the first half. 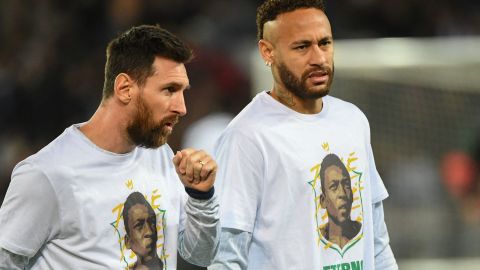 Messi and his teammates wore t-shirts to honor Pelé during the warmup.

Messi, who dovetailed the attack alongside Neymar Jr., then doubled the lead in the 72nd minute after a well timed run and right foot finish.

The linesman had initially flagged for offside, but the Virtual Assistant Referee (VAR) overruled the call and the goal was given.

The win on Messi’s return is some welcome good news for PSG, who lost in the league for the first time this season last week, 3-1 away to Lens.

‘Little by little, everyone is coming back’

“Yes, it was very important to get back to winning ways. We have rivals who are pushing hard,” Galtier told PSGTV after the game.

“We knew that we were going to have a difficult match because Angers is a team that plays good football and poses big problems on a tactical level.

“I also insist on the fact that the situation – post-World Cup – means that we have had a lot of players absent, that the group was very scattered and that, little by little, everyone is coming back and reconnecting.”

PSG, which is six points clear atop the table, plays Rennes in its next game on Sunday.