Kate Middleton is celebrating her 41st birthday on Monday, but all eyes are on her brother-in-law as he continues to conduct several tell-alls to promote his bombshell book “Spare.”

The Duke of Sussex’s ghostwritten memoir, which has been leaked by several U.K. outlets, is being widely released on Tuesday. It has already generated incendiary headlines with its details of bitter family resentments.

Buckingham Palace, still choosing to remain silent on the 38-year-old’s numerous claims, has chosen to put its focus on Middleton’s birthday. They took to Twitter and tweeted a photo of the Princess of Wales beaming as she accepts flowers from a little girl during a recent royal engagement.

“Wishing the Princess of Wales a very Happy Birthday today!” the palace tweeted alongside a cake emoji.

Buckingham Palace officials have declined to comment on any of the allegations. A spokesperson for King Charles III, 74, didn’t immediately respond to Fox News Digital’s request for comment. A spokesperson for Kensington Palace, which represents the Prince and Princess of Wales, told Fox News Digital they don’t have a comment. Allies of the royal family have pushed back on Harry’s claims, largely anonymously.

Middleton has been praised over the years as Britain’s reliable royal. 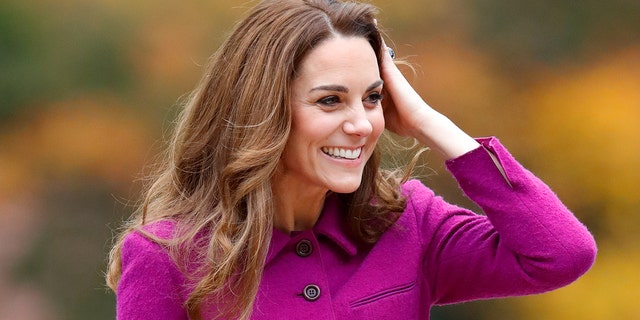 Kate Middleton is seen as the smiling mother of three who can comfort grieving parents at a children’s hospice or wow the nation by playing piano during a televised Christmas concert.
(Max Mumby/Indigo/Getty Images)

“This is the woman who was the commoner who married into the royal family and who has not tripped up, not caused any embarrassment,” Vanity Fair’s royal correspondent Katie Nicholl, author of “Kate: The Future Queen,” told The Associated Press in 2022.

Prince William’s spouse has won accolades for her commitment to early education, art and music. The charities she supports gush about her willingness to get personally involved in their causes.

The daughter of a flight attendant and a flight dispatcher, Catherine Elizabeth Middleton was born in Reading, England, on Jan. 9, 1982, and grew up with a younger sister, Pippa, and a younger brother, James. 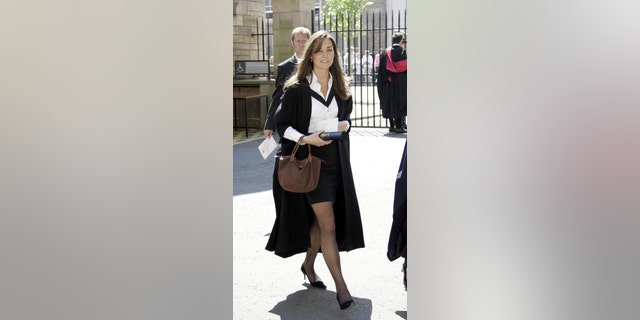 Kate Middleton, then-girlfriend of Prince William, during their graduation ceremony at St Andrews in 2005. She graduated with a degree in art history.
(Photo by Anwar Hussein Collection/ROTA/WireImage)

The Middletons, from a well-to-do area of Berkshire, west of London, moved to Jordan when the future princess was 2 years old because of her father’s work. The family returned to England in 1986, and Middleton attended the exclusive Marlborough College, where she was active in sports, including hockey, tennis and netball.

It was at the University of St. Andrews in Scotland that Middleton first met William, the oldest son of then-Prince Charles and the late Princess Diana. The pair were friends first and then housemates before they became romantically linked sometime in 2004. Middleton graduated in 2005 with a degree in art history and a budding relationship with the heir to the throne.

As public scrutiny intensified, Middleton’s lawyers asked newspaper editors to leave her alone. Still, the British press kept a close eye on the couple’s relationship, including their brief split in 2007. William, now 40, later acknowledged that the couple’s romance wobbled for several months, saying they were both young and trying to find their way. 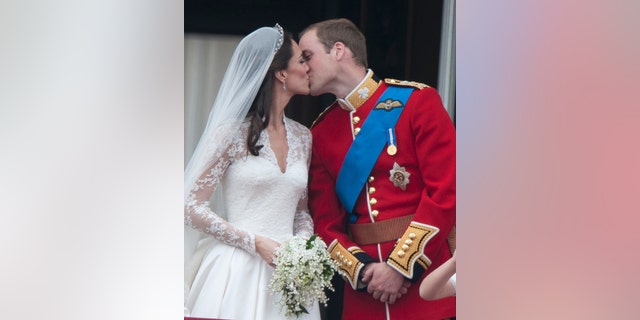 Catherine, Duchess of Cambridge and Prince William, Duke of Cambridge on the balcony at Buckingham Palace, following their wedding at Westminster Abbey on April 29, 2011, in London.
(Mark Cuthbert/UK Press via Getty Images)

The tabloids dubbed Middleton “Waity Katie” for her patience during their courtship. The couple eventually married at Westminster Abbey in 2011. They are now parents to Prince George, 9, Princess Charlotte, 7, and Prince Louis, 4.

Over the years, Middleton has largely avoided criticism by the royal maxim “never complain, never explain.” Still, the Princess of Wales couldn’t escape Harry’s memoir, which details his long-simmering resentment as a “spare” being overshadowed by the “heir.”

In the book, he recounted arguments and a physical altercation with William. Harry also wrote about when he notoriously wore a Nazi uniform to a costume party in 2005. He alleged that both the Prince and Princess of Wales encouraged the choice of outfit and “howled” with laughter when they saw it. 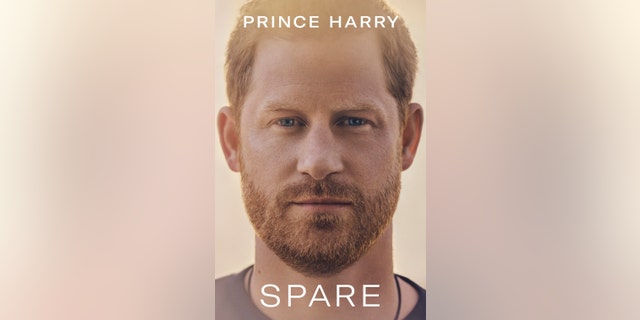 Prince Harry’s memoir ‘Spare’ is being widely released on Tuesday. In it, he made several shocking allegations about the British royal family.
(Penguin)

In the final pages, Harry described how he and William walked side by side during the funeral procession of Queen Elizabeth II in September but spoke barely a word to one another.

“The next day, Meg and I returned to the United States,” he wrote.

In an interview with ITV’s Tom Bradby that aired on Sunday, Harry described how his relationship with his now-wife Meghan Markle changed the dynamics with his older brother and sister-in-law. Markle, 41, an American actress who starred in the legal drama “Suits,” became the Duchess of Sussex when she married the British prince in 2018. 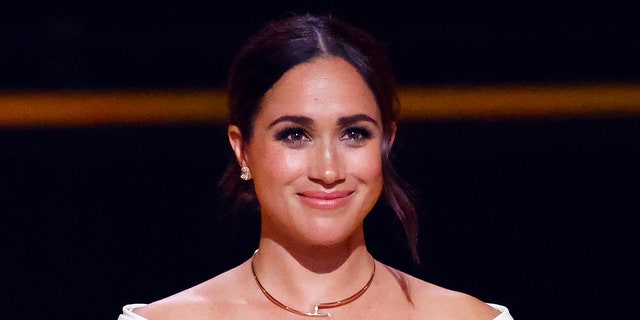 Prince Harry has accused the royal family of being complicit in his wife Meghan Markle’s anguish. He claimed that his stepmother Camilla, the queen consort, had leaked private conversations to the media in order to burnish her own reputation.
(Max Mumby/Indigo)

“I had put a lot of hope in the idea that you know, be William and Kate and me and whoever – I thought that the, you know, the four of us would, you know, bring me and William closer together,” Harry explained. “We could go out and do work together. Um, which I did a lot as the third wheel to them, um, which was fun at times, but also I guess slightly awkward at times as well.”

“I don’t think they were ever expecting me to get, or to become, uh, to get into a relationship with, with someone like Meghan who had, you know, a very successful career,” Harry added.

Harry said it was the British press that publicly pitted the royal wives against each other. He also described how the Prince and Princess of Wales allegedly reacted to his relationship with Markle. 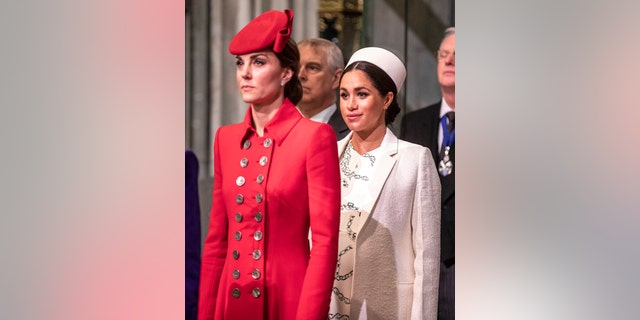 Prince Harry said it was British tabloids that pitted the royal wives against each other.
(Richard Pohle – WPA Pool/Getty Images)

“Some of the things that my brother and sister-in-law – some of the way that they were acting or behaving definitely felt to me as though, unfortunately, that stereotyping was causing a bit of a barrier to them really sort of, you know, introducing or welcoming her in,” said Harry.

In one report ahead of the book’s release, Harry described an alleged confrontation between the women after Meghan said Middleton had “baby brain because of her hormones.” The incident in question took place ahead of the Duke and Duchess of Sussex’s wedding. Middleton gave birth to Louis one month before the nuptials.

According to the report, Markle was reprimanded after she was allegedly told that she wasn’t close enough to her sister-in-law to discuss her hormones and that it wasn’t the way the royals spoke to each other. 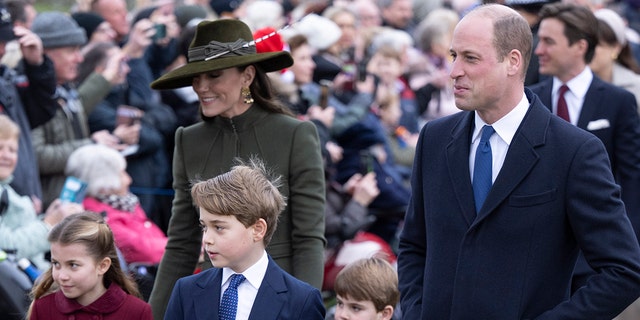 In an excerpt published by Us Weekly, Harry reflected on the Prince and Princess of Wales’ royal wedding. He described it as “yet another farewell.”

“The brother I’d escorted into Westminster Abbey that morning was gone – forever,” he wrote, according to the outlet. “Who could deny it? He’d never again be first and foremost Willy. We’d never again ride together across the Lesotho countryside with capes blowing behind us. We’d never again share a horsey-smelling cottage while learning to fly.”

“Who shall separate us?” Harry continued. “Life, that’s who. And I recall Willy walking her back up the aisle, and as they disappeared through the door, into the carriage that would convey them to Buckingham Palace, into the eternal partnership they’d pledged, I recall thinking: Goodbye.” 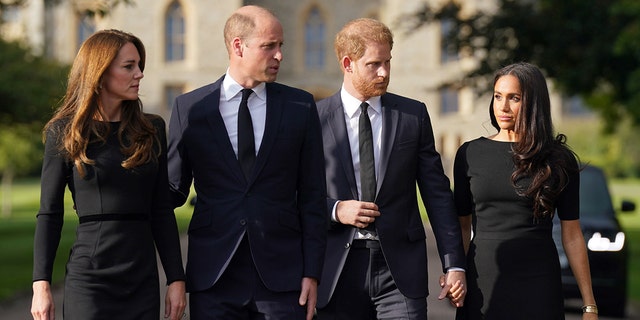 The Duke and Duchess of Sussex announced they were stepping back as senior royals in 2020. They reside in the coastal city of Montecito, California, with their son Archie, 3, and daughter Lilibet, 1.