Jordan Spieth on the joy of trash-talking Tiger Woods 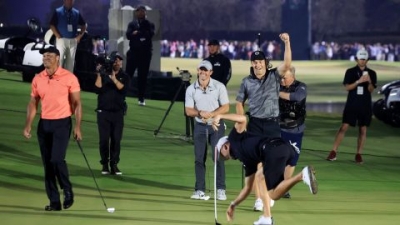 Jordan Spieth and Justin Thomas celebrate as Tiger Woods and Rory McIlroy look on during The Match at Pelican Golf Club on December 10.

It’s one of sport’s most unfamiliar sights – Tiger Woods standing idly by as his opponents are crowned winners.

Alongside Rory McIlroy, Woods had just fallen to an emphatic defeat in the seventh edition of The Match to golf’s dynamic duo and long-time friends – Jordan Spieth and Justin Thomas.

Cross-armed, the 15-time major winner watched on as the victorious pair were presented with commemorative bracelets. All night on December 10, trash talk had rained down like bullets under the lights at Florida’s Pelican Club, but Spieth had one left in the chamber.

“The joy out of getting this does not match the joy of standing here with Tiger just being so upset that he has to stand here for this,” a giggling Spieth jabbed.

Woods’ composed expression cracked, a wide smile breaking out across the 46-year-old’s face followed by a shake of the head.

ORLANDO, FLORIDA – DECEMBER 18: Charlie Woods and Tiger Woods of the United States looks on from the practice green during the final round of the PNC Championship at Ritz-Carlton Golf Club on December 18, 2022 in Orlando, Florida. (Photo by Mike Ehrmann/Getty Images)

Woods alone boasted six more majors and 31 more PGA titles than the three greats of the game beside him combined, a mind-blowing disparity that Spieth was well aware of. Yet, it was this very gap that made the final blow that much more satisfying, the Dallas-born golfer explained.

“He’s in a position that he doesn’t even need to justify fighting back,” Spieth told CNN.

“He laughs, he’s pissed off. He’s pretty much like, ‘All right, go home kid.’ That’s what I got out of that smile.

“And for me, it was sarcasm. He’s a guy who you never think about seeing stick around and have to sit there while somebody else won. Because one, he didn’t lose very often, and two, the few times he did, I’m sure he was very far away from wherever the award ceremony was.” 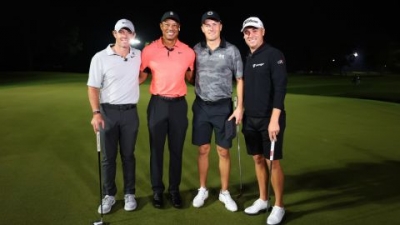 As is custom, the back-and-forth between the mic’d up players and the commentary team helped drive the friendly competitive atmosphere of the event, which raised funds for relief efforts in Florida in the wake of Hurricane Ian in October.

At times, the relentless verbal warfare waged between Thomas and NBA legend Charles Barkley took center stage over the golf itself, a role reversal that Spieth had initially been anxious to take on. 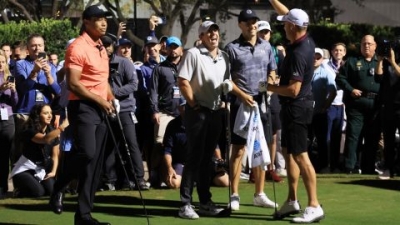 The goading began from the first tee.

“I was super nervous to get going because it was a new role – we had to entertain,” Spieth admitted.

“It was kind of an excited anxiousness, like super excited to get going, not really knowing what to expect.

“Us four together, we’ve all had a pretty good relationship … bringing out a lot of people and a lot of interest, I think that really helped [us] get comfortable.”

And based on the pair’s track record, there is nobody Spieth is more comfortable around than Thomas.

The long-time friends became only the third pair in history to go undefeated in the first four rounds of the Presidents Cup in September, as a flawless 5-0-0 run extended their combined record across President Cups and Ryder Cups to 8-2-0.

“We just have a lot of fun,” Spieth said.

“It takes some of the pressure away when we’re playing, because on a bad hole one of us will just be self-depreciating and the other will laugh, and all of a sudden you just get a little bit more comfortable. And on the good holes, we’re hyping each other up, using phrases that are funny to he and I.

“Think of going out with your best buddy in a high-pressure situation. That has such benefit on the back end and being able to just feel super comfortable – it’s kind of an addicting feeling.” 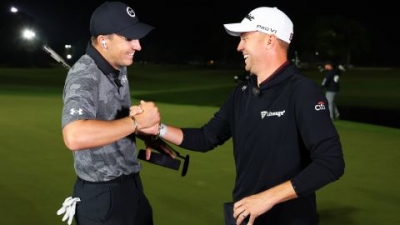 Victory at The Match put the icing on a strong year for Spieth, continuing his return to his best form.

After bursting onto the scene with three major triumphs inside his first four years on Tour, a relative slump saw the former World No. 1 fall outside the top 50 for the first time since his historic rookie season in 2020.

Yet after ending a 1,351-day trophy drought and finishing runner-up at The Open last year, Spieth has gone from strength to strength, adding his 13th Tour title in April and dazzling in a dominant Presidents Cup win to climb back inside the world’s top 15. 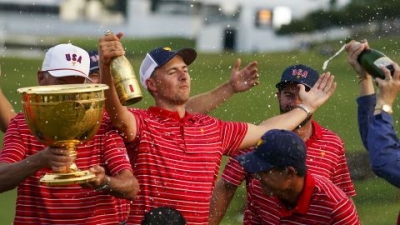 Spieth dazzled at the Presidents Cup in September.

Spieth believes a focus on mechanical work in his swing had led to a neglect of putting and chipping, but after finding balance, he is optimistic about achieving the consistency needed to hurdle his high benchmark; to be in firm contention for half the season’s majors.

“I always have the goal of trying to have a chance when I tee it up on Sunday to win at least two majors – that’s where we’re setting up to peak for,” he said.

“That doesn’t mean I have to be in the lead, it means when I tee it up, I sit there and say, ‘If I play my best golf, I will win this today.’”