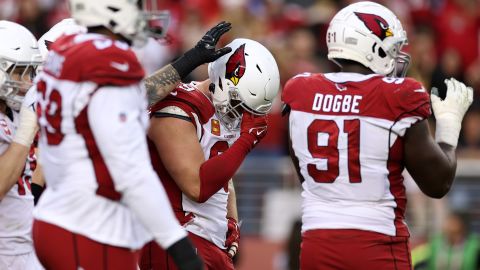 JJ Watt is overcome with emotion as he is taken out of the game near the end of fourth quarter against the San Francisco 49ers.

JJ Watt struggled to hold back his tears as he received a standing ovation while he left the NFL field for the final time after his likely Hall of Fame career came to an end on Sunday.

The 33-year-old – one of the best defensive players of all time – announced in December last year that he would retire at the end of the 2022 season.

And Watt capped off his stellar career in perfect fashion, recording two sacks and one pass defended in the Arizona Cardinals’ season-ending 38-13 loss to the San Francisco 49ers at Levi’s Stadium.

In the final few minutes, Watt was taken out of the game so the fans inside the stadium, his teammates and his family in attendance could show their appreciation for all that he has achieved, on and off the field.

As many in the stadium rose to their feet to applaud him off the field, Watt looked on the verge of tears, while his wife, Kealia, watched on from the stands.

The day before the game against the 49ers, Watt was shown a surprise video, compiled of well-wishes from family members, teammates and legendary NFL opponents, all congratulating him on a successful career and wishing him luck for what is to come. 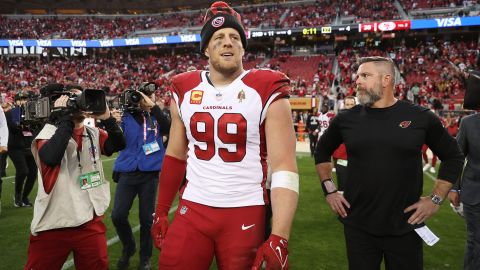 Watt looks on after the game against the 49ers.

Watt described how the video – which he called “one of the greatest gifts I’ve ever received” – finally breached his emotional dam.

“Then (Cardinals defensive line coach Matt) Burke got up and explained putting together the video. The second that video turned on, I lost it. I absolutely lost it. I was bawling like a baby, and I didn’t stop until well into the night.”

Despite a disappointing season in general for the Cardinals – they finished with a record of 4-13 – Watt has continued to impress.

His two sacks on Sunday means he finishes the season with 12.5 sacks, taking his career total to 114.5 sacks.

When asked if he could continue to play at the highest level, Watt’s answer was emphatic.

It is the end to Watt’s dominant career, for which he’ll most likely be voted into the Pro Football Hall of Fame, for which he will be eligible in 2028.

The seven-time All Pro and five-time Pro Bowl selection, according to the NFL, was selected with the 11th overall pick in the 2011 NFL Draft by the Houston Texans, where he played his first 10 seasons. He owns the Texans franchise record for the most career sacks with 101.

Watt is well-known for his work off the field.

After Hurricane Harvey devastated areas around Houston and the rest of the Gulf Coast in August 2017, Watt embarked on a career-defining charitable effort.

Through a YouCaring campaign, and plenty of social media attention and help from some famous friends, Watt raised more than $37 million for victims of the hurricane. Because of his fundraising, he was awarded the 2017 Walter Payton NFL Man of the Year Award, which is given to honor the charity and volunteer efforts of NFL players. 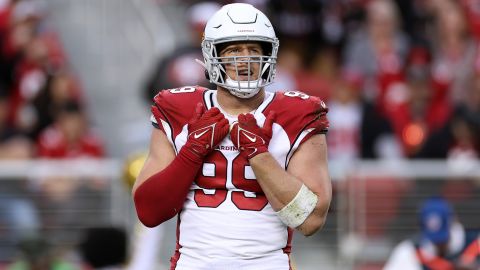 Watt looks on during the game against the 49ers.

Watt revealed in a social media post earlier this season that he underwent treatment for atrial fibrillation – an irregular heartbeat described by many sufferers as a “quiver,” “flutter,” or “flip-flop” of the heart.

Watt wrote a farewell message on Twitter shortly after the defeat to the 49ers.

“Sometime in the coming days I’ll find the right words. But for right now, all I can say is thank you,” he wrote.

“You’ve changed my life forever and I am perpetually grateful.”

Wayne Sterling contributed to this report.