Future of Foldable Tablets Looks Promising With Samsung and LG 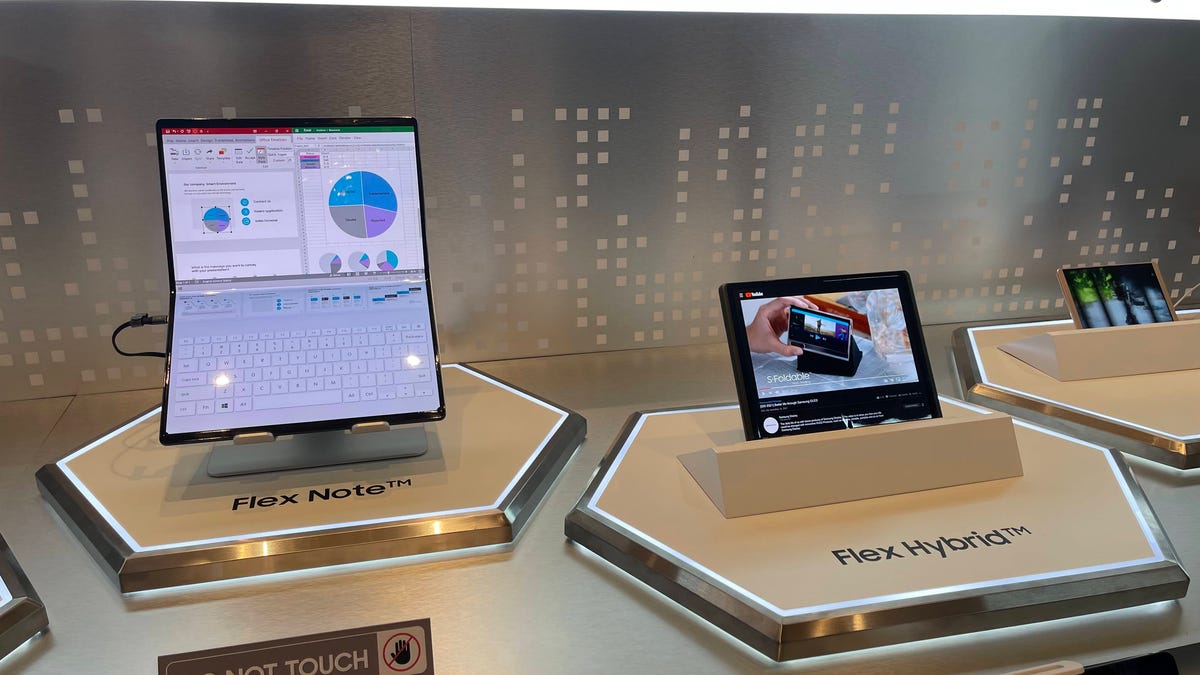 Almost every major phone-maker, from Samsung to Oppo and Motorola, has released a foldable phone. The ones that haven’t — Apple and Google — are rumored to be working on it.

But at CES 2023, foldable tablets are what piqued my curiosity. Samsung and LG, two of the world’s largest display-makers, both showcased tablet-like devices in various shapes and sizes that can bend, fold, slide or do all three.

These concepts got me wondering about whether there’s a real future for foldable tablets, especially at a time when companies are struggling to sell traditional tablets. What is clear, however, is that companies like Samsung and LG are thinking about it, as are PC-makers like Lenovo and Acer.

The more I’ve thought about it, the more a foldable tablet starts to make sense — maybe even more so than a foldable phone.

Samsung and LG both kicked off CES 2023 with announcements about their concept foldable displays, many of which come in tablet-sized formats. The star of the show was Samsung’s Flex Hybrid, a concept that you have to see to fully understand.

It closes like a notebook and opens up to reveal a tablet-like screen. But the real wow factor is that you can extend the screen’s size and even change its aspect ratio when unfolded. The right side of the screen slides out, extending the display size from 10.5 inches to 12.4 inches. In a demonstration at its CES booth, Samsung showed how the display automatically adjusts to show more content when the screen is extended.

This isn’t the first time Samsung has exhibited concepts like this. In 2022, Samsung flaunted accordion-like displays and sliding screens, designs that are also present this year.

Samsung has other ideas for shapeshifting tablets, too. It also showed the Flex Slidable Duet concept at CES, a screen that expands on both sides to provide more viewing area for playing games or watching movies. The display measures 13 to 14 inches but can extend up to 17.3 inches, according to a Samsung press release. There’s also a version of this concept that can only expand its screen in one direction, a device that Samsung appropriately calls the Flex Slidable Solo. 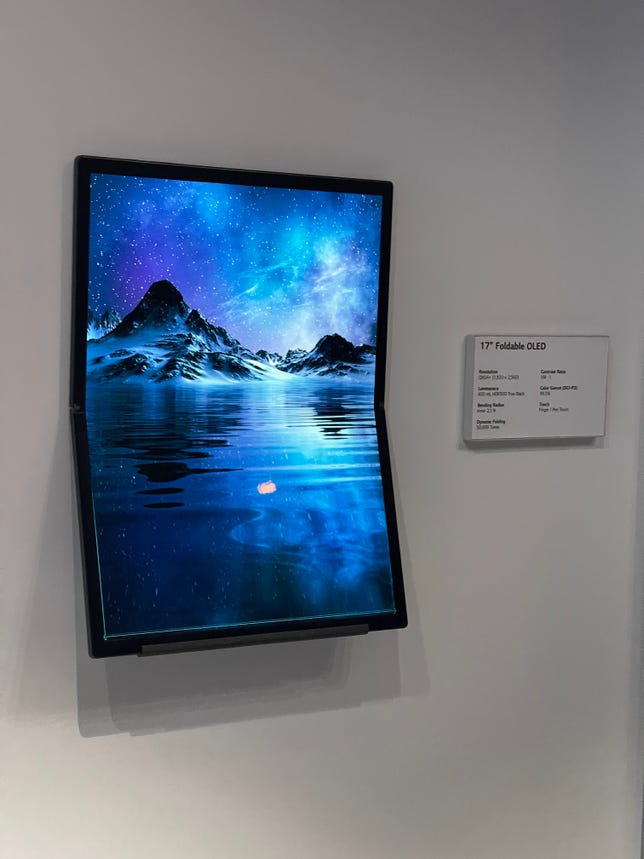 LG had two main foldable tablet concepts to show at CES: an 8-inch tablet that can fold inward and outward in both directions, and a 17-inch device that folds in half. LG asserts that the 17-inch display is almost entirely creaseless, and the company is positioning it as either a giant tablet or a more portable external monitor for a laptop.

The gadgets shown at CES are far from being the first foldable tablets. There are Lenovo’s X1 Fold and newer ThinkPad X1 Fold, while Asus has the Zenbook Fold OLED. LG’s 17-inch concept largely looks like it’s trying to accomplish the same goal that Lenovo and Asus have already begun to explore with these devices.

The big question is whether these companies can convince consumers that foldable tablets are even useful in the first place. Samsung is seemingly trying to address this conundrum by developing screens that can change their shape and size to go along with how you’re using your device. Based on Samsung’s demo of the Flex Hybrid, it looks like you’ll be able to view content that wasn’t visible before when expanding the slideable portion of the screen. The clip above seems to show a shopping website as an example, with more products being shown as the screen expands.

Lenovo already has some interesting ideas about how to put the X1 Fold’s bendable screen to good use. When the screen is folded halfway, you can place Lenovo’s Bluetooth keyboard over the bottom half of the screen so that it functions as a mini laptop.

Samsung also isn’t the only company experimenting with displays that can expand by sliding and rolling. TCL and Motorola have both dreamed up similar concepts for smartphone designs, although Samsung’s feels closer to an actual product given its experience in foldables. Samsung is also the world’s largest smartphone-maker and second-largest tablet-maker, which makes its concepts seem more impactful than those from TCL and Motorola. While LG no longer has a presence in the mobile industry, it’s a major display supplier and still makes its own laptops.

Foldable tablets may have advantages over foldable phones

Having a phone that can fold in half to easily fit in your pocket can certainly be useful. But a tablet that can do the same thing is even better, mostly for the simple reason that tablets are inherently larger than most phones.

There’s another advantage: Foldable tablets may not face all of the same design challenges that bendable phones have encountered so far. For example, one of my biggest complaints about the Galaxy Z Fold lineup has been that it sometimes feels awkward to use when closed. The cover screen has vastly improved since the first Galaxy Fold arrived in 2019, but it still doesn’t come close to feeling like a standard, nonfolding phone.

The Galaxy Z Fold also feels bulky when closed since its thickness essentially equates to two phones stacked on top of one another. When I reviewed Microsoft’s Surface Duo 2 in 2021, I struggled to find a comfortable way to hold it when taking photos with the main camera since you must keep the phone unfolded to see what you’re shooting. 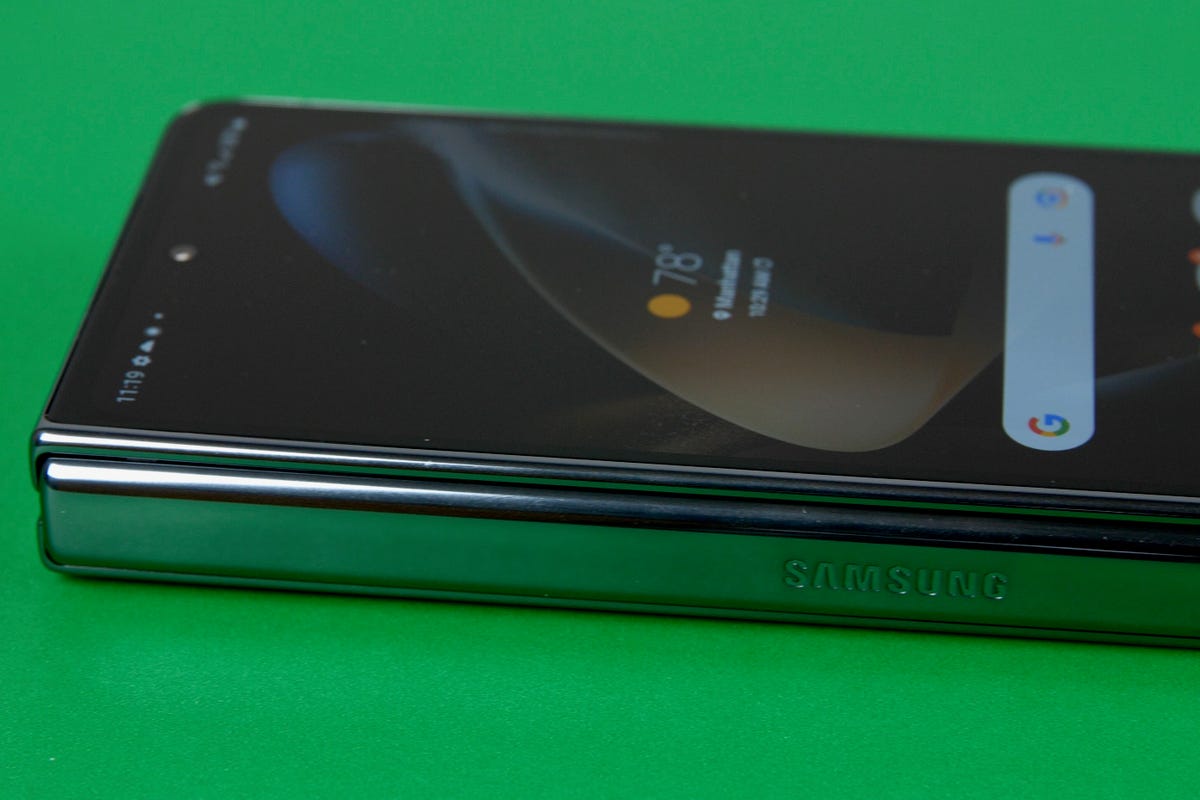 The Galaxy Z Fold 4 is stil thick compared to a regular phone.

Aside from the selfie camera for video chats, camera quality also isn’t as important on a tablet as it is on a phone. So the awkwardness issue I mentioned when taking photos with the Surface Duo 2 likely wouldn’t happen on a foldable tablet.

The primary appeal behind foldable tablets from Samsung, LG, Lenovo and Acer — concept or not — is portability. Having a tablet that folds in half makes it easier to fit in a backpack, suitcase or purse on your next flight, commute or beach trip. But phones are already compact in their current form, meaning the value proposition behind phones like the Galaxy Z Fold can be a little harder to sell.

That doesn’t mean foldable tablets are immune from design hiccups, as my colleague Dan Ackerman wrote when trying out Lenovo’s and Acer’s devices. Creating larger displays that bend and fold likely presents its own set of engineering challenges compared to foldable phones.

Foldable phones are also moving more quickly, with market researcher IDC forecasting a 66.6% year-over-year increase in global shipments in 2022. So even though foldable phones may have different hurdles to overcome, companies like Samsung have been able to address these points over several generations of products so far. 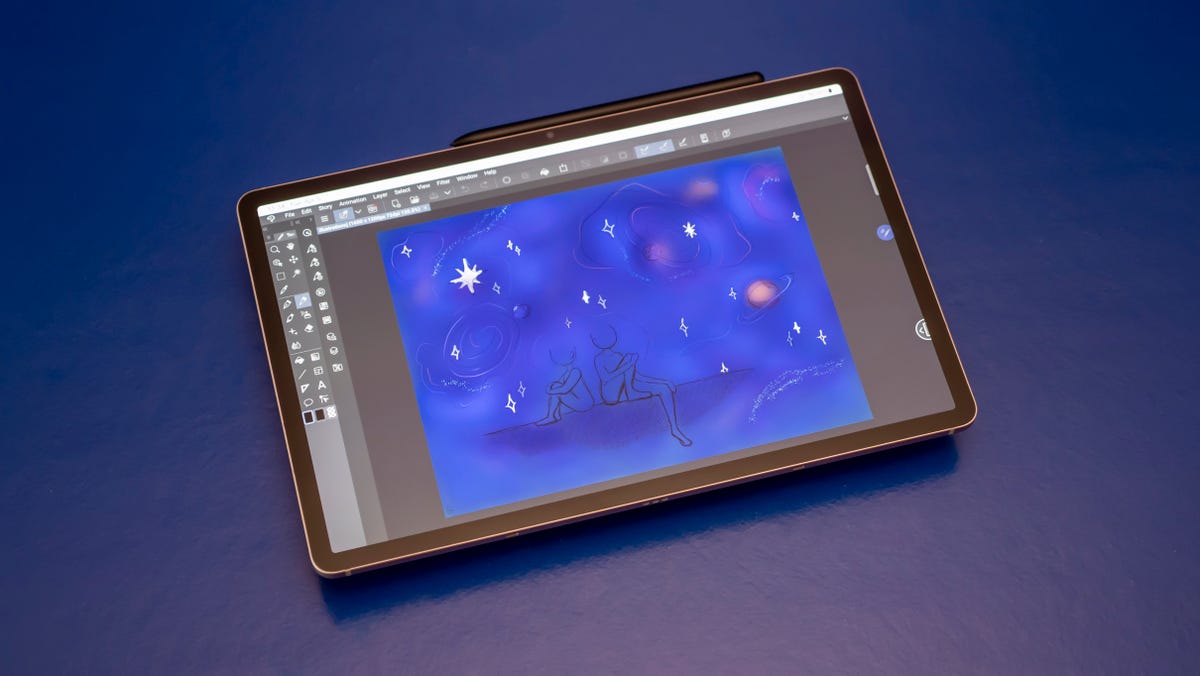 Tablet sales got a boost during the early phase of the pandemic as people socialized, worked and attended school virtually. But sales looked bleak last year. Global tablet shipments were down 8.8% year over year in the third quarter of 2022, marking the fifth straight quarter of decline, according to IDC. That slump was mostly due to economic headwinds as consumers are looking to spend less, says the report.

New tablets with shapeshifting displays may not be enough to change that, especially since foldable devices are typically expensive. But tablets are still long overdue for a refresh. Arguably, the tablet’s biggest transformation since the first iPad’s launch has been the shift toward laptop-tablet hybrid devices, a transition that began roughly a decade ago around the debut of Windows 8. But tablets haven’t fundamentally changed much since then, aside from adapting larger screens and gaining routine hardware upgrades.

It took years for those hybrid devices to work out their kinks and become mainstays in our lives. If foldable tablets catch on, the case will likely be the same, mostly because of high prices and software challenges. But the concepts present at CES show that progress is certainly happening.

The goal for all tablets, foldable or not, is to provide a larger display for tasks that your phone may not be ideal for such as gaming, watching movies, reading and working. So finding creative ways to further extend that screen size, as Samsung has done with the Flex Hybrid’s slidable screen, seems like a natural evolution.

Foldable phones still feel like they’re in search of a purpose, but foldable tablets may have already found one.