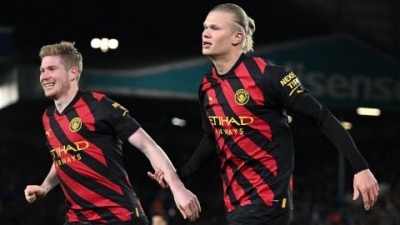 It would seem that not even going six weeks without playing competitive football can knock Erling Haaland out of his stride.

The Norwegian goal machine has already scored three times in two matches since English domestic football returned following the World Cup, including his 19th and 20th goals of the Premier League season in Manchester City’s 3-1 win over Leeds United on Wednesday.

Haaland has reached the 20-goal mark in just 15 games, meaning he is on course to obliterate the current Premier League scoring record of 34 held jointly by Alan Shearer and Andy Cole. However, that joint record came when there were 42 games played during a season.

If Haaland continues scoring at the current rate, the 22-year-old will score a mind-boggling 50 goals in the Premier League this season.

Haaland’s 20 Premier League goals have come in 14 games played after he missed City’s match against Leicester City back in November through injury, making him the fastest player to reach the landmark in Premier League history.

Speaking to Amazon Prime after Wednesday game, Shearer – who holds the all time Premier League goals record with 260 – said he now expects Haaland to get at least 40 goals this season and says his own record is in danger if the Norwegian international continues playing in English football..

“I said it before a ball was kicked this season, I think a good center forward will get 20 goals and a fantastic center forward, which he is, will have a figure in his head and it wouldn’t surprise me if it’s got a four in front,” Shearer said.

“I love his hunger and desire, I love that attitude. If you want to build the perfect center forward from scratch, he is it. There isn’t anything he’s not good at.”

However, even if Haaland was to reach 50 goals it still wouldn’t get close to English football’s all-time top-flight record.

That record belongs to the late Everton striker Dixie Dean, who scored an incredible 60 goals in just 39 games in the 1927-28 season.

With words that will strike fear into the hearts of defenders up and down the country, City manager Pep Guardiola told reporters after the victory over Leeds that Haaland is still not at his best – so maybe that 60-goal mark isn’t entirely out of the question.

“I think he is still not at his best, as he was at the beginning of the season, because of the injury he had at Dortmund for a long period,” Guardiola told reporters

“When we really started to train in Abu Dhabi, he couldn’t train one single day – maybe the last day – and to move this tall and huge body is not easy for him,” said Guardiola, referring to City’s five-day warm weather training camp in December for players not involved in the World Cup.

“The numbers are unbelievable but I have the feeling he is not just coming here for the numbers, he wants to win it.”

City’s victory closes the gap on Arsenal to five points at the top of the Premier League after the Gunners had temporarily extended the margin with a win over West Ham.