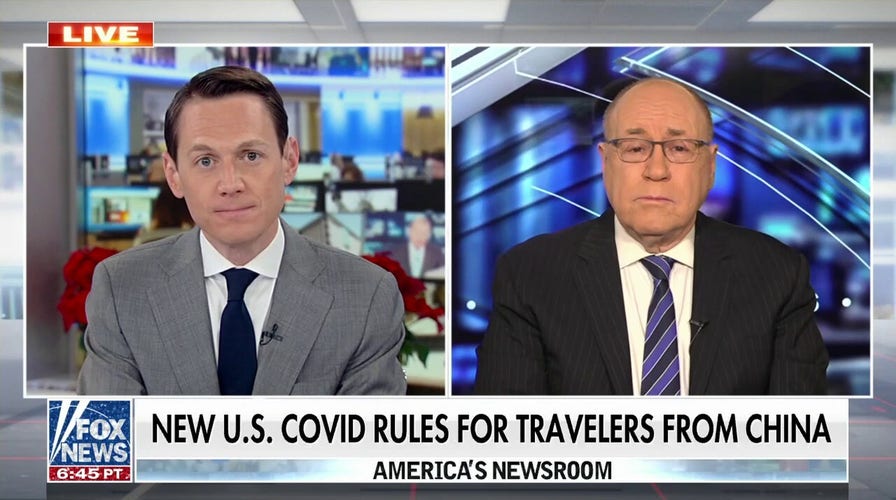 A Beijing hospital has run out of beds, forcing patients to rest on stretchers or lay on the hallway floors as COVID-19 infections run rampant in the country and stretch thin the public health sectors’ resources.

“We have no beds, we have no oxygen, and we have a room full of sick people waiting,” a health care worker in Beijing Chaoyang Hospital’s emergency room told the Financial Times ahead of Christmas.

China has watched as cases of COVID-19 spiked following the rollback of the country’s “zero-COVID” policy as the abrupt shift occurred without any increase in vaccinations. Instead, officials tried to simply bolster hospitals in anticipation of a new COVID-19 wave by establishing hundreds of “fever clinics” to increase testing.

The hospitals were not prepared for just how significant the wave ended up being, with the Chuiyangliu hospital in eastern Beijing packed with new arrivals and unable to properly sequester them on Jan. 5.

One report even suggested that hospitals have told patients to “bring your own bed” due to the shortage.

Pictures from the Associated Press show old women bent over with oxygen masks in the hallways as they wait for triage from doctors. 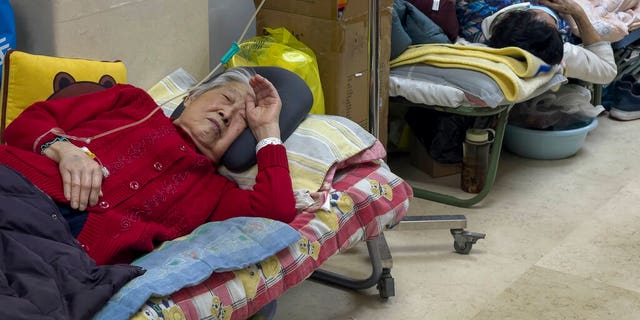 Elderly patients rest along a Beijing hospital corridor as they receive intravenous drips on Jan. 5, 2023. Patients, most of them elderly, were on stretchers in hallways and taking oxygen while sitting in wheelchairs as COVID-19 continues to surge in the Chinese capital.
(AP Photo/Andy Wong) 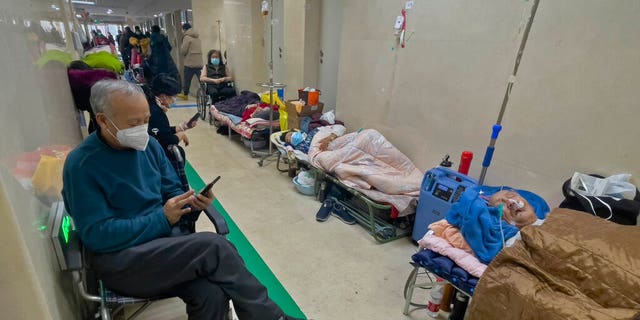 “As soon as they released [the policy], there was rampant spread of a highly contagious subvariant, XBB, and high risk of a new, more dangerous variant emerging,” Siegel said. “China stuck with their own vaccines, which are inferior to ours, and there hasn’t been much recent vaccine uptake, so the vaccines have mostly worn off.”

He added that China’s “vulnerable populations have poor vaccine uptake, leading to hospitalization and death.”

Latest estimates indicate that deaths could rise from 9,000 a day to as many as 25,000 a day in January — a stark contrast to the astronomically low 5,227 deaths prior to the end of “zero-COVID” in comparison to the total population, even though Siegel said that “we can’t rely on [China’s] numbers.” 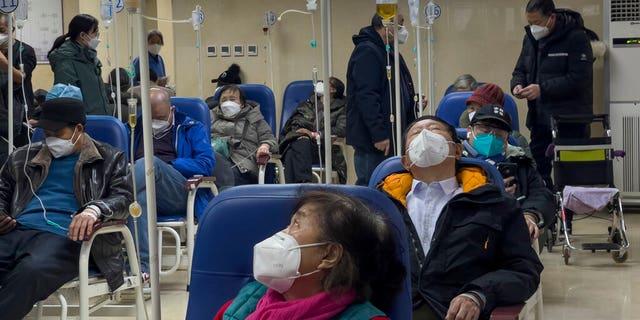 Patients receive intravenous drips in the emergency ward of a hospital in Beijing on Jan. 5, 2023.
(AP Photo/Andy Wong) 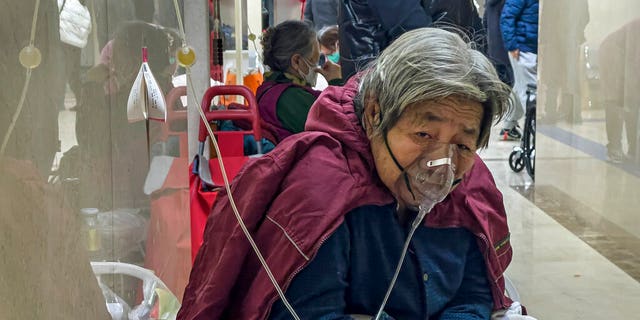 An elderly patient receives an intravenous drip while using a ventilator in the hallway of a Beijing hospital on Jan. 5, 2023.
(AP Photo/Andy Wong)

The World Health Organization (WHO) raised concerns about China’s lack of transparency regarding its current situation, with Emergencies Director Dr. Michael Ryan arguing that China’s current figures “under-represent the true impact of the disease in terms of hospital admissions, in terms of ICU admissions and particularly in terms of deaths,” British newspaper the Evening Standard reported.

As COVID-19 cases continued to spread, China changed its criteria for key data reporting, mainly what qualifies as a COVID-related death — limited to deaths caused by respiratory failure and pneumonia — and ceased to report asymptomatic cases.

BELGIUM TO TEST WASTEWATER ON FLIGHTS ARRIVING FROM CHINA FOR COVID

President Joe Biden said that China had been “very sensitive” when the U.S. and WHO raised concerns that officials “haven’t been forthcoming.” The U.S., along with several other nations, imposed testing requirements for travelers from China, with Morocco outright banning any arrivals from the country.

Chinese Foreign Ministry Spokesperson Mao Ning told reporters on Thursday, “Facts have proved that China has always, in accordance with the principles of legality, timeliness, openness and transparency, maintained close communication and shared relevant information and data with the WHO in a timely manner.” 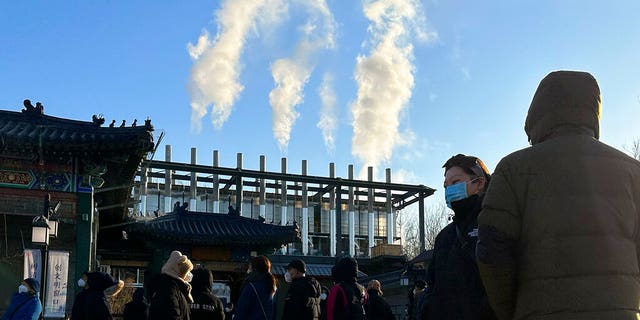 Mourners stand outside a crematorium in Beijing on Dec. 31, 2022.
(AP Photo/Ng Han Guan) 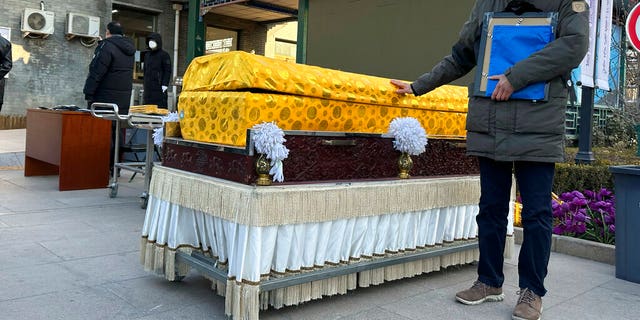 A man places his hand on a casket outside a crematorium in Beijing on Dec. 31, 2022.
(AP Photo/Ng Han Guan)

“At the moment, China’s COVID situation is under control. As China adjusts its COVID response policy, we will continue to carry out activities, including technical exchanges with the WHO,” Mao said during a press briefing. “It is hoped that the WHO Secretariat will take a science-based, objective and just position and play a positive role in addressing the pandemic globally.”

Mao added that “the COVID situation in China is under control,” but images out of China present a different story as pictures of street cremations increase as the number of deaths and bodies overwhelm funeral homes.

In one clip shared on Twitter, a wooden casket can be seen burning on the side of what is allegedly a road in rural China; another shows families gathered around a parking lot cremation in the middle of a city, according to the New York Post.

And Bloomberg reported that funeral homes can’t afford to offer families more than 10 minutes to grieve in a room stuffed with bodies on stretchers before moving on, with one funeral home handling more than 500 corpses — five times the usual number.

One family said they were “lucky” that it was wintertime because they had to wait five days before the funeral home in Shanghai could come to collect their relative’s body.

An employee at the Longhua Funeral Home told Bloomberg that “the whole system is paralyzed right now.”