Fiddling with your phone’s charging cable is always annoying, and Apple knows it. It’s tackled the problem with MagSafe chargers, which are compatible with its newer models of phones and accessories and allow you to ditch the wall charger and get faster wireless charging that you can take on the go. A MagSafe charger attaches magnetically to charge Apple products, including the iPhone 14, 13 and 12, AirPods Pro and more. It may seem silly to buy new MagSafe chargers if you already have wireless chargers for your iPhone, but once you start using MagSafe charging options, you won’t want to go back.

Several MagSafe-enabled wireless charging cases — not just Apple’s — are on our list of the best MagSafe iPhone accessories. But this list is focused specifically on the best wireless MagSafe chargers that allow for fast Qi wireless charging. To that end, there are a few things to keep in mind:

Note that I’ve personally, if anecdotally, used all of the products listed below. Again, the unofficial MagSafe device offerings are fine if you’re not concerned with charging speed, for example, if you’re charging overnight.

These will magnetically attach to MagSafe-compatible iPhone 13 models but are not MagSafe-certified. As such, they’ll only charge iPhones at a maximum of 7.5 watts (and several only charge at 5 watts). 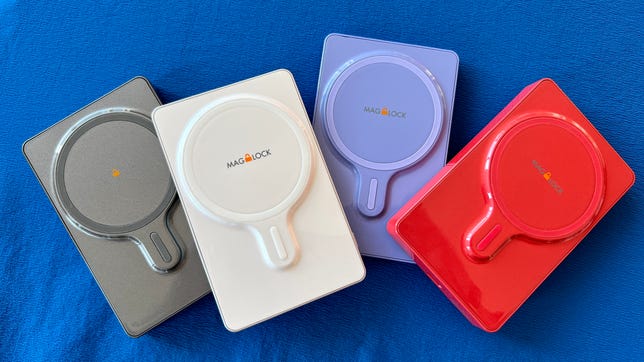 MyCharge calls its new line of magnetic power banks Superhero MagLock, implying that they’re real saviors. I was impressed by their design. Not only do the batteries, which come in various capacities, have strong magnets and stick really well to the back of your iPhone 12 or 13, but they have raised coils, which are supposed to help with reducing heat levels while charging. It does seem to work.

I’m showing the 3,000-mAh battery in the photo. It’s lightweight and slim and is nice to have around for some emergency charging. However, it won’t get you a full charge, so you may want to step up to one of the higher-capacity options like the 6,000-mAh model that retails for $60. The 9,000-mAh version is beefy and feels like your phone is attached to a small brick. The battery and phone do fit in your hand nicely but the combo certainly isn’t pocket friendly.

All the MagLock batteries charge Qi-enabled iPhones at 5 watts, although you can get faster charging if you go wired and use a USB-C to Lightning cable. I also liked how there’s a chime when the charging starts and your phone tells you how much juice is left in the battery pack (it’s tied into iOS15).

The SuperHero MagLock is available in a few color options and has a nice glossy finish. It currently is the best-designed magnetic power bank — better even than Apple’s. 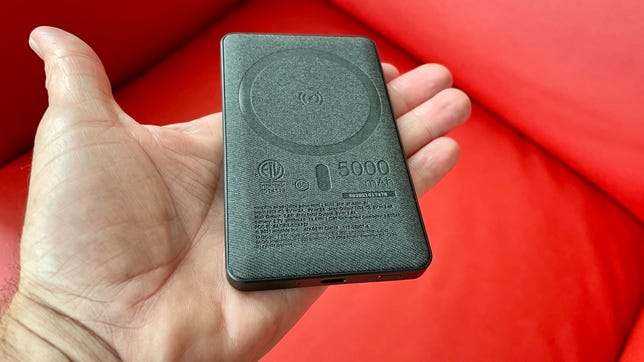 Mophie’s magnetic power bank is similar to Anker’s but has a more refined design. Like the Anker, this isn’t an official Apple MagSafe accessory, but it magnetically adheres to the back of your iPhone 13 model or MagSafe case — yes, it sticks nicely — and is svelte for 5,000-mAh battery. It can also be used with other phones that support wireless charging as it comes with a stick-on magnet.

Wireless charging speeds are limited to 7.5W for iPhones but if you need a faster charge, you can connect a USB-C to Lightning cable to bump the speed up to 12W. This has enough juice to fully charge an iPhone 13 or 13 Pro once but it’ll fall a little short of a full charge with an iPhone 13 Max Pro. I liked it. 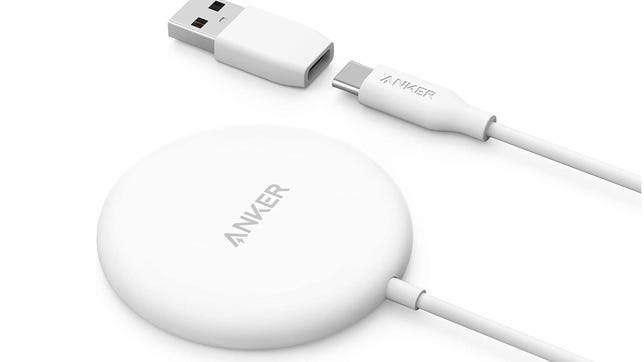 This is Anker’s take on Apple’s MagSafe wireless charger. This MagSafe puck costs about half the price but only charges at up to 7.5 watts with iPhones (the white version costs a few bucks more than the black version). No AC adapter is included. 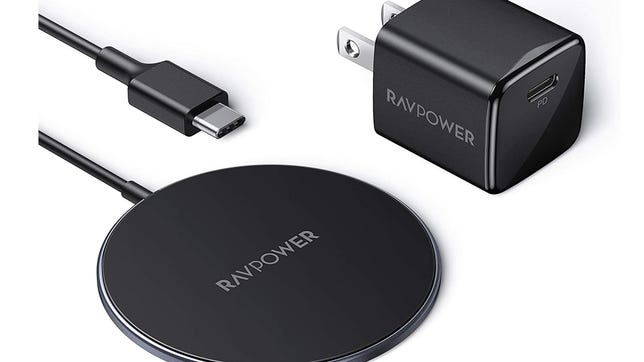 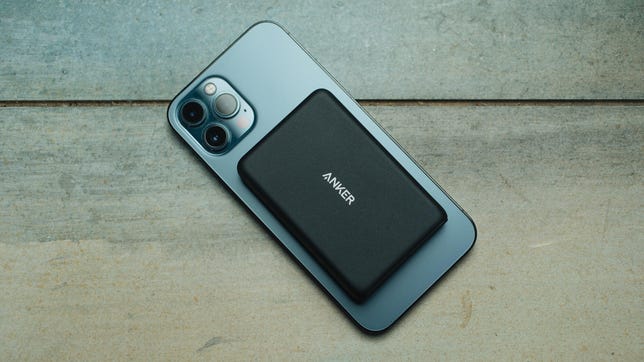 Anker’s PowerCore Magnetic 5K magnetically adheres to the back of your iPhone 13 model or MagSafe case and wirelessly charges your phone. Alas, it doesn’t offer fast wireless charging — it only charges at 5 watts, not even 7.5. But it is convenient and fairly compact. It also adheres well. I slightly prefer the competing model from Mophie because it is a little slimmer. 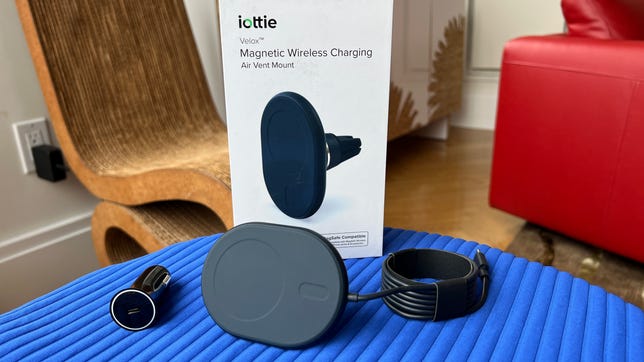 iOttie has released a nice MagSafe-compatible wireless car charger with a car vent mount. It has a strong magnet, so your iPhone stays on the mount, and it also has an integrated USB-C cable and cigarette-lighter power adapter so you’re ready to start charging out of the box. Note that iPhone “fast” charging caps out at 7.5 watts (this is designed for MagSafe-equipped iPhones and cases). 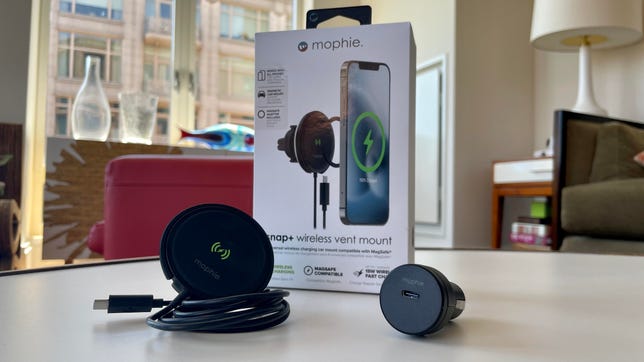 Mophie’s Snap Plus 15W Wireless Charging Vent Mount is a magnetic mount that comes with an integrated USB-C cable (the charging puck is removable from the mount but the cable is integrated into the puck). It also comes with a cigarette lighter adapter and a magnetic ring you can stick onto the back of phones that aren’t MagSafe-enabled, including Android models. I tried it with a MagSafe case on my iPhone and the phone stuck well to the mount. That said, the magnet isn’t super-strong and I wouldn’t recommend this for heavier phones like the Samsung Galaxy S21 Ultra. But overall it’s an attractively designed accessory.

It can wirelessly charge Android models at up to 15-watt speeds, but with iPhones wireless charging tops out at 7.5 watts. 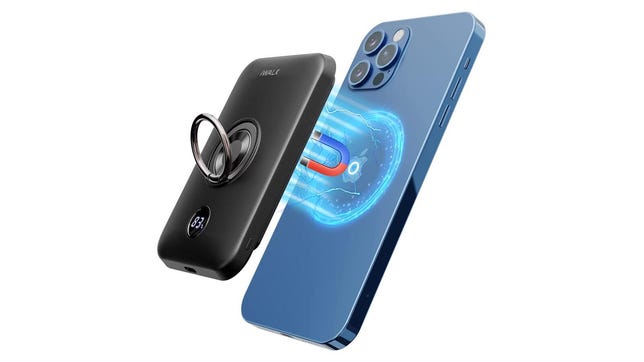 When it comes to external batteries, Anker tends to make reliable products. But if you’re willing to go with a more generic option, you can save some money by going with the iWalk Magnetic Wireless Power Bank, which costs $30 to $35 or about $15 less than Anker’s magnetic power bank. This iWalk is a little bigger and heavier than the Anker option. It’s a 6,000-mAh battery (instead of 5,000-mAh), but it does offer a little faster charging — iWalk claims up to 7.5 watts for iPhone — and the ring offers some security when you’re holding your phone and also converts into a kickstand charging stand for video watching, which is nice. 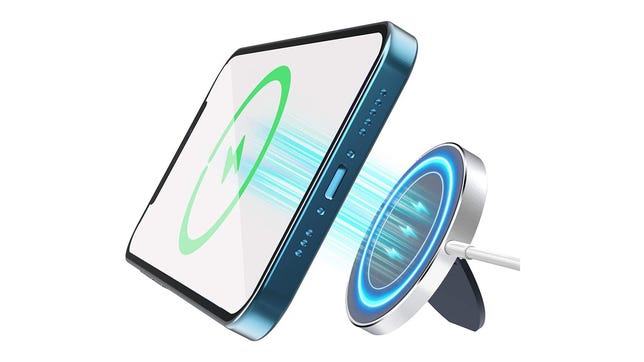 Many of the chargers you’ll see for the latest iPhone have your phone lay flat, which may not be ideal if charging at your desk or if you’re charging while watching a video on your phone. Moko’s Armor charger includes a little kickstand you can use to keep your phone sitting on the charging stand at an angle while horizontal, and does so at a fairly inexpensive price tag. 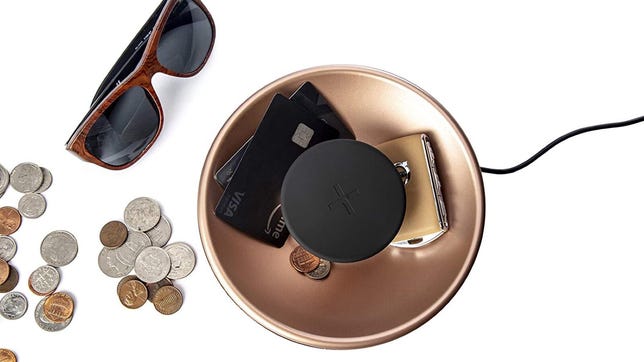 For the most part, MagSafe chargers just sort of take up space when they aren’t charging anything. Tylt decided to change things up a little with its new Bowl charger. At the center of a bowl there’s a pedestal with a MagSafe charger on top, which magnetically holds your phone in place. Everywhere else in the bowl is open, and you can put whatever you want in it. Coins, keys and other metallic things can go in safely without interrupting charging. And, if we’re being honest, it looks way nicer than most other chargers.

These are the real deal and will charge iPhone 13 models at a full 15 watts (when paired with a 20-watt or better USB-C charger that’s Power Delivery 3.0-enabled). 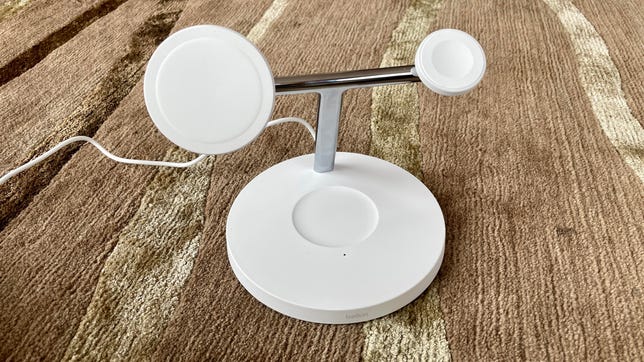 As its name implies, the Belkin Boost Up Charge Pro 3-in-1 Wireless Charger with MagSafe does triple duty, wirelessly charging your iPhone, Apple Watch and AirPods at the same time (your iPhone will start charge at 15 watts even with your Watch and AirPods charging). The charging pad/charging stand is not cheap at $150, but it’s one of the few MagSafe three-in-one chargers available right now.

Belkin also makes a two-in-one wireless charger with MagSafe for $100 that’s designed to simultaneously charge your iPhone and AirPods. 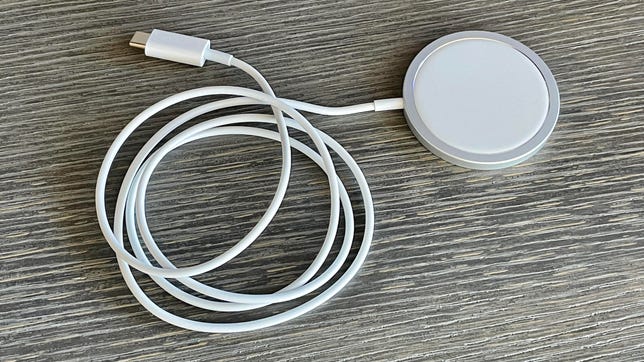 This is the official MagSafe charger made by Apple directly. It’s unclear whether its charging cable is any better than cheaper options from Aukey, RAVPower and others, but the wireless charging pad does look nice in silver and white. No power adapter is included. 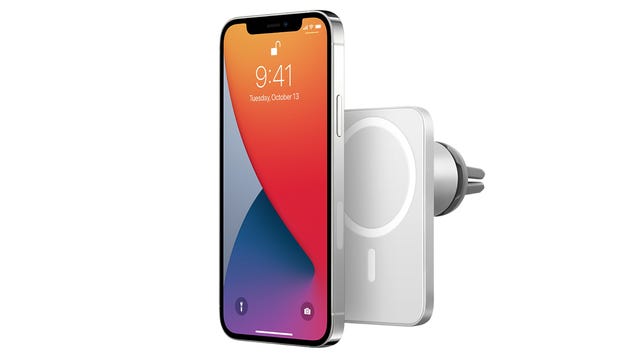 Belkin’s Car Vent Mount Pro with MagSafe technically isn’t a charger. It’s just a certified MagSafe car-vent mount. Belkin will soon have a wireless charging version of this (it costs $60), but you’d have to connect a cable to it anyway for charging. The advantage of a wireless version would be that unlike with this vent mount, you wouldn’t have to plug a cable into your phone every time you want to charge it (I have a USB-C-to-LIghtning cable set up in the car for fast charging, but I don’t love the extra step of having to plug in the cable each time I want to charge the phone).

All that said, what sets this Belkin apart from other generic, non MagSafe-certified mounts that look similar (and some even offer wireless charging), is that the Belkin has a very strong magnet while many of these other air-vent mounts don’t. If you have a MagSafe case on your phone (or just a naked newer iPhone model), the phone really sticks to the mount. The clip also keeps the mount securely in your vent and you can rotate the mount from portrait to landscape mode as needed. 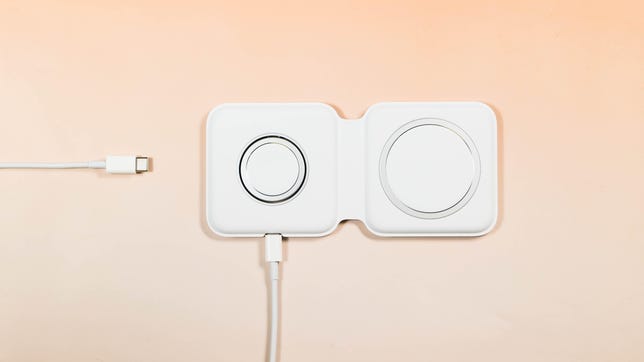 Apple’s MagSafe Duo Charger is designed to charge your iPhone and Apple Watch at the same time. What’s nice about it is that the charging pad folds up, reducing its footprint by half, making it a nice travel charger for your iPhone and Apple Watch. It doesn’t come with a charging adapter — which is pretty ridiculous at this price — although a USB-C-to-Lightning cable is included. You should pair this with a 20-watt USB-C power adapter for fastest charging speeds.