Apple HomePod Speaker Gets Sound Upgrade for $299: A Hands-On 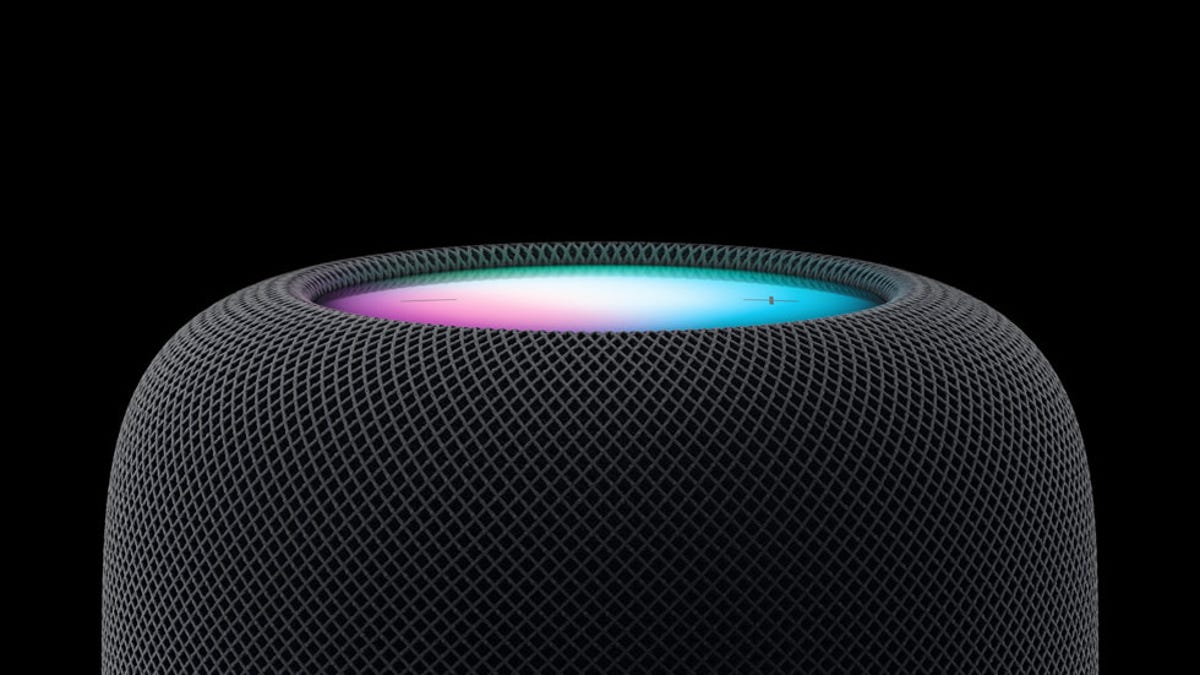 Apple unveiled its second-gen HomePod on Wednesday, nearly two years after it discontinued the first HomePod. CNET was on hand at the company’s event in New York City to hear the new speaker in person.

So, first off, what has changed? The new version is a full-size smart speaker with “improved acoustics” and new smart-home capabilities, including temperature and humidity sensors and the ability to notify you if it hears a smoke or carbon monoxide alarm.

Both the new HomePod and the existing HomePod Mini rely on Siri, the company’s voice assistant, to listen for and execute “Hey, Siri” commands.

Called the HomePod like the previous model, the new speaker is now available for preorder at the Apple Store for $299 (£299, AU$479) and will be available Feb. 3. It comes in black or white. 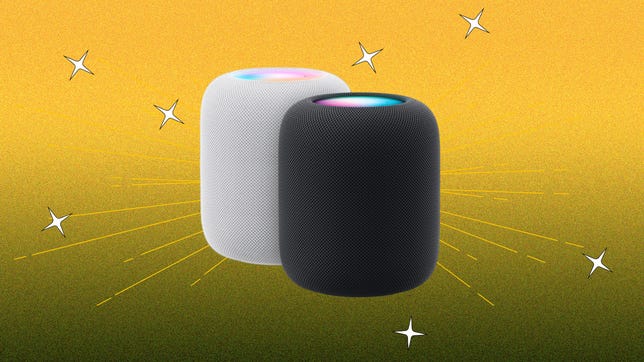 Apple’s second-gen HomePod is still in its preorder stage, though we’re now seeing it listed at several third-party retailers in addition to Apple itself. The device starts shipping on Feb. 3.

The design is very similar to the original full-size HomePod. At 6.6 inches tall and 5.6 inches wide, the new speaker is roughly the same size as its predecessor too. But the new HomePod has a range of key upgrades.

Inside is a custom woofer and five tweeters that use beamforming to direct audio and improve immersion, according to Apple. You can link two HomePod speakers to create a stereo pair, although doing so requires two HomePods of the same model. You can’t combine an original HomePod and a new one to create a pair, for example. Multiple HomePods can be linked throughout the home for multiroom audio with AirPlay 2.

The speaker also supports spatial audio, Apple’s term for 360-degree effects that include Dolby Atmos music available on Apple Music. Atmos is a surround-sound standard used both in movie theaters and the home, and more recently has been used to remix albums. 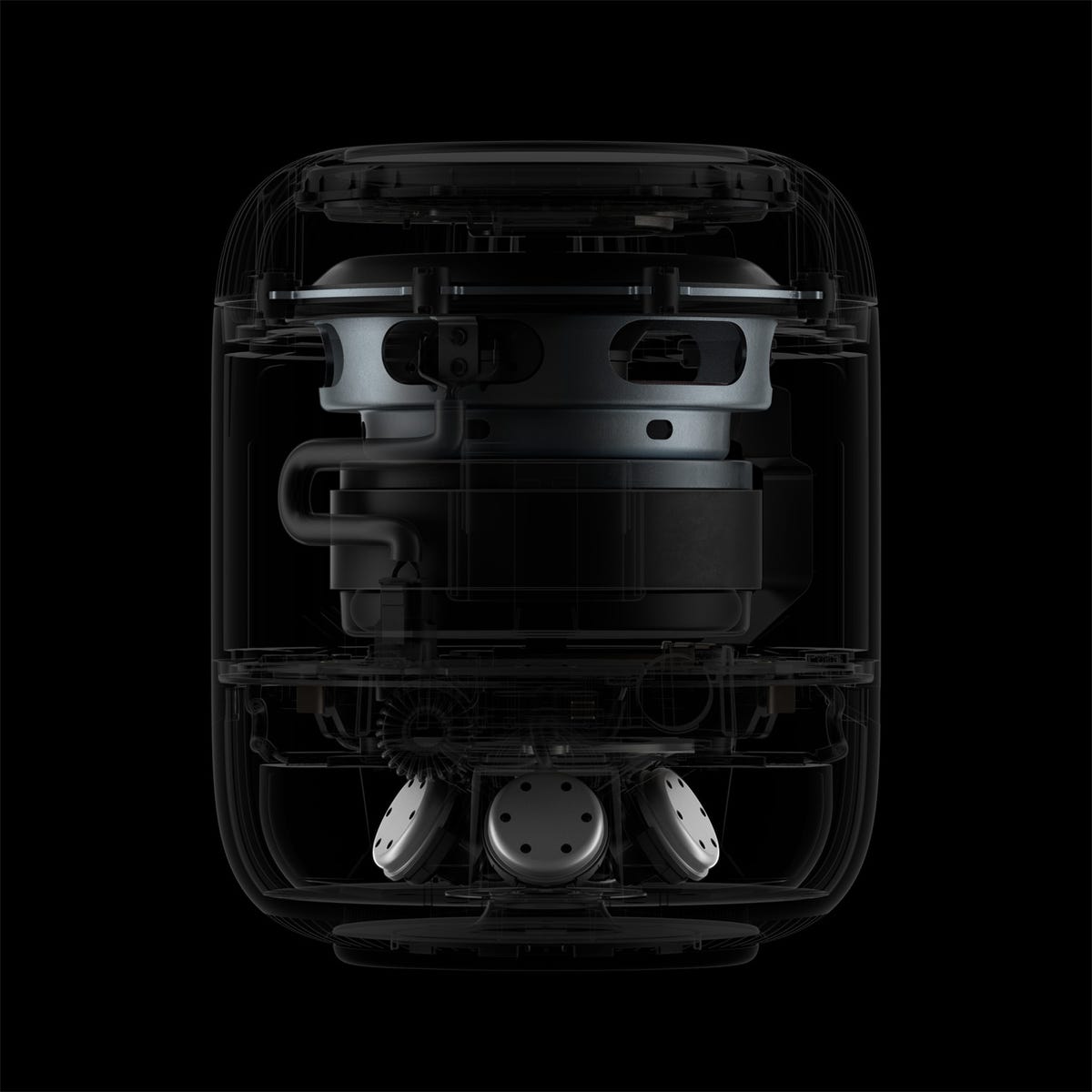 Inside the new Apple HomePod is the high-excursion woofer internal bass-EQ mic and beamforming five-tweeter array.

The speaker has a couple of new smart-home extras up its sleeve, too. A feature called Smart Recognition, coming via a software update this spring, “can listen for smoke and carbon monoxide alarms, and send a notification directly to the user’s iPhone if a sound is identified,” according to Apple. The speaker also has sensors for temperature and humidity, and you can set up triggers to close the blinds or turn on a fan automatically when the room reaches a certain temperature.

The temperature and humidity sensor and Smart Recognition features have also been announced as upcoming for the HomePod Mini. 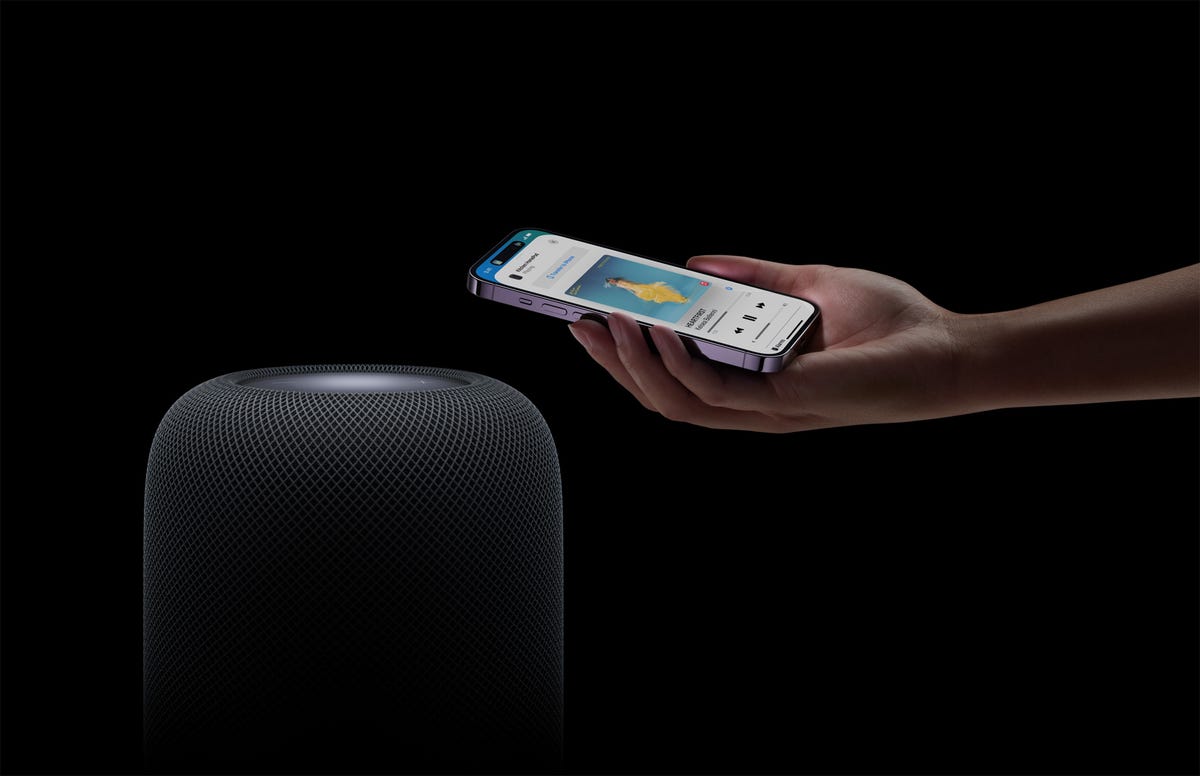 Bringing an iPhone near the HomePod allows you to hand off songs, voice calls and more to the speaker.

You can move an iPhone close to the speaker to hand off whatever is producing audio, from a song to a podcast to a voice call, to the speaker. (That feature requires iOS 16.3.) The phone will also surface personalized song and podcast suggestions when held near the speaker. The HomePod supports Apple’s Find My feature so you can ask Siri to play a sound on a misplaced device, or ask for the location of friends or family who share it via the Find My app.

Owners of the Apple TV 4K streaming device can make the HomePod their TV speaker for all devices connected to the TV, thanks to eARC linking via HDMI. Siri voice commands heard by a HomePod can also control the Apple TV hands free.

Ears-on with the new HomePod

It’s always difficult to ascertain a speaker’s sound quality in a canned demo like this, and I’ll reserve any definitive thoughts until I get a review unit to test for myself. Generally, though, the song snippets I heard sounded good, and the speaker should appeal to people who already have, had or were interested in the original.

The company began proceedings at its Tribeca loft with some pop music — including The Weeknd — and I was initially surprised to hear how small the speaker sounded. Despite offering 360-surround sound, I found the audio clung pretty closely to the speaker itself. With the next track Boomerang by Yebba, the company wanted to emphasize the HomePod’s spatial audio compatibility. And while there was a swirling effect in the 30 seconds they played, it wasn’t very obvious.

The most impressive part of the demo, though, was when the company added a second speaker, which made it a HomePod stereo pair. When playing Mystery Lady by Masego and Don Toliver the pallet immediately expanded — and not just by creating a stereo field. A percussion effect could be heard to the extreme left outside of the physical location of the cabinets.

Finally, I heard the original HomePod back in 2017 when the company’s representatives used the live version of The Eagles’ Hotel California to highlight its bass response. However, when the bass drum entered about a minute into the song, the sound was unintentionally terrible. The huge drum seemed to overload the speaker and resulted in a “blet” sound.

At today’s event, there were no such issues, and the drum sounded just as enormous and deep as the company would have hoped for.

Apple had been rumored to working on a “HomePod 2” since at least June 2022, and this will only be the company’s fourth speaker in the last 20 years. The company has only released three other speakers  — the iPod Hi-Fi, the original $350 Apple HomePod and the HomePod Mini, which remains on sale for $99.

The new $299 HomePod will compete directly with higher-end smart speakers like the Amazon Echo Studio and Sonos One, both of which cost $200. Meanwhile, the current HomePod Mini is priced competitively with Google’s larger Nest Audio, though it is undercut by the $49 Google Nest Mini and most Amazon Echo models.

Apple’s Siri voice assistant may be dominant in mobile, but the company has struggled to translate this success into smart speakers. In terms of competition, Amazon’s Echo series and Google Nest speakers jostle each other for first and second place.

I look forward to reviewing the new Apple HomePod soon.