Africa’s World Cup: how a continent that usually underperforms finally got it right 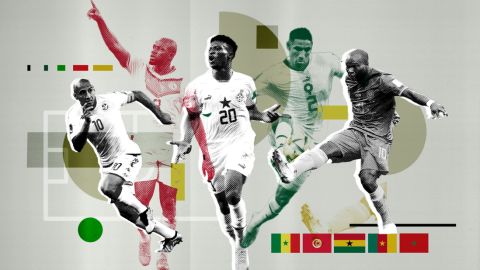 After the first round of games at the World Cup, an all too familiar script looked to be playing out for African football fans. Five games played, three losses, two draws and only Ghana putting the ball in the back of the net in a defeat by Portugal.

Another disappointing tournament appeared to be looming for the continent that Brazil soccer great and three-time winner Pelé once declared would “win the World Cup before the year 2000.”

That quote came off the back of Zaire’s humiliating World Cup group stage performance which included a 9-0 defeat by Yugoslavia in the 1974 tournament. Zaire was the first sub-Saharan nation to participate at the World Cup.

However, as Qatar 2022 draws to a close, the outlook looks very different.

Every single team from the continent went on to win a game in its group for the first time in history, two teams made it out of the group stages – a joint record – and Morocco will become the first African team to play in a World Cup semifinal.

Against the backdrop of a tournament that seems increasingly defined by global politics and corporations, African countries have provided passion at Qatar 2022 and delivered plenty of pride for their nations.

The incredible skill and color of Senegal’s famous 12eme Gainde supporter group never failed to grab the attention of TV broadcast directors, while the contingent of fans from Ghana and Cameroon brought a rhythmic soundscape akin to a stirring cinematic soundtrack whenever those two teams played. 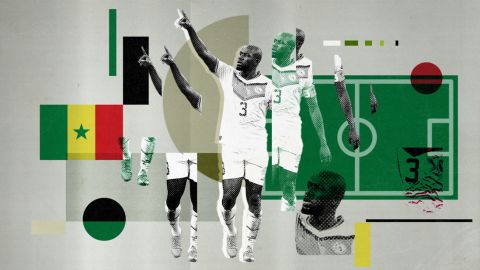 Senegal captain Kalidou Koulibaly scored the goal that sent his country to the round of 16.

But even the sub-Saharan countries haven’t been able to quite match the cacophony that Moroccan and Tunisian fans have brought to this World Cup – every clearance met with vociferous cheers, every opposition touch relentlessly booed and whistled.

None of this would have been possible if the World Cup hadn’t been hosted by Qatar.

Doha has long been not only a hub of travel in Asia, but also in Africa. So much so that travel for most fans has been easier to Doha than it was in 2010 when the tournament was on African soil.

A Google search shows that flying from Douala to Doha is cheaper than to Johannesburg. The cheapest route from Casablanca to Johannesburg is to fly through Doha.

But not only is this the most affordable World Cup for Africans, it is also the most accessible.

Qatar has made getting a visa easier to fans from Africa than any other World Cup host says Francis Nkwain, a Cameroonian football expert and media executive.

“Hoops we [Africans] have to go through as a people to access into other parts of the world is very under reported,” Nkwain told CNN Sport. 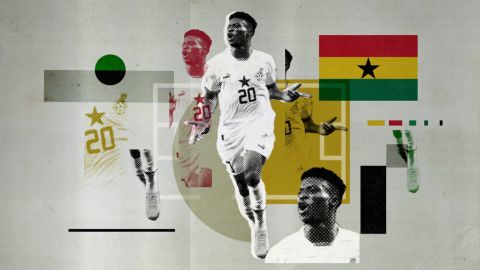 Mohamed Kudus was the breakout star of Ghana’s World Cup, scoring a brace against South Korea.

That accessibility cannot be underestimated in helping turn neutral matches into “home” matches, particularly for the North African countries, who can count on support from across Africa and the Arab world, something that Morocco’s head coach Walid Regragui has been quick to acknowledge.

“Before it was just the Moroccans who supported us,” he said ahead of the victory over Spain. “Now it is the Africans and Arabs.”

It is no coincidence that African nations have performed the best at this World Cup since the tournament was hosted in South Africa, responding to their supporters’ pride and passion.

For decades, Africa has produced some of the best players to grace the beautiful game, but that hasn’t always been the case for the continent’s coaches.

A lack of infrastructure for the development of coaches, coupled with next to no opportunities afforded to them at the highest level, has meant historically African nations have more often than not been led by European managers.

In African footballing circles, these coaches are often referred to – less than flatteringly – as “plumbers.”

But the trend of African nations employing foreign managers is changing.

It’s a development that Belgian coach Tom Saintfiet, who earlier this year coached a debutant Gambian side to a quarterfinal finish at the Africa Cup of Nations, says is to be celebrated.

“The biggest advantage is now that African teams did not choose the expensive big name coaches,” Saintfiet told CNN Sport.

“I think that was a huge mistake from the past where in 2010 … coaches like [Lars] Lagerbäck and Sven-Göran Eriksson … came to Africa without any experience in African football.”

For the first time in history, all five of the African countries at the World Cup were coached by home nationals and all enjoyed some success to varying degrees. 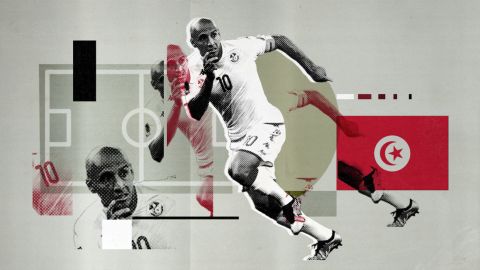 Only Roger Milla and Asamoah Gyan have scored more World Cup goals for an African nation than Wahbi Khazri.

The most successful is Regragui, who is at the forefront of a coaching revolution in Africa that is seeing former players taking up coaching roles.

Affectionately nicknamed “Rass l’Avocat” (Avocado Head) because of his bald head, Regragui has been successful everywhere he has worked.

He led a mid-table Moroccan club, FUS Rabat, to its only ever league title, won the Qatar Stars League with Al Duhail, before returning home to win a league and Champions League double with Wydad Casablanca – when Regragui became only the second Moroccan coach to win Africa’s continental club title.

Perhaps more significantly, Regragui is also a member of the first cohort of coaches to receive their Confederation of African Football’s pro coaching license earlier this year.

Prior to Regragui’s cohort, any African manager looking to get continental coaching badges would have had to travel to Europe or Asia to obtain those qualifications.

Before the tournament, Samuel Eto’o, president of the Cameroonian Football Association, made a rather outlandish prediction that all five African countries would make it out of their groups and the final would be contested between Morocco and Cameroon.

He was widely ridiculed for that statement, but his tongue-in-cheek comments were more about changing the way his nation and continent see themselves. Regragui made similar comments after Morocco knocked out Spain.

“At some point in Africa, we have to be ambitious and why not win the World Cup?” he said.

Eto’o and Regragui speak to a much-needed shift in the mentality of African countries, that they should aspire to not just participate, but to compete at the top table.

But if countries want to improve on Africa’s record-breaking performance during Qatar 2022 at the next World Cup where nine teams from Africa will compete, then that positive mindset has to be maintained. 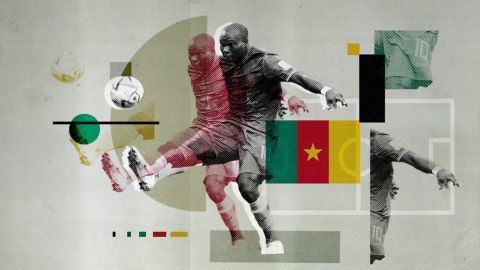 Vincent Aboubaker earlier this year scored eight goals in the 2021 Africa Cup of Nations, the most in a single tournament since 1974.

“I really believe that Africa must believe in the fact that in the coming years it can have a world champion,” agrees Saintfiet.

“I hope it happens in 2026, that more and more African teams come there not to be participants but to compete with the very best to be world champions.”

While players like Yassine “Bono” Bounou, Achraf Hakimi, Hakim Ziyech and coach Regragui will get most of the credit for Morocco’s historic performance, the Royal Moroccan Football Federation (FMRF) should also be credited with the Atlas Lions’ success at Qatar 2022.

After decades of footballing mediocrity, the FMRF – with the backing of King Mohammed VI – decided to overhaul the nation’s football structure.

In 2009, the FMRF opened its national football academy, the Mohamed VI Football Academy, which helped develop current international players like Nayef Aguerd and Youssef En-Nesryi, as well as trying to unearth talent in the Moroccan diaspora by employing scouts from across Europe to flag any eligible youth players in Europe.

The federation also began investing in women’s football, developing football in schools and clubs as well as a creating a national league structure.

Funded by the FMRF, Morocco is currently the only nation in the world to have two tiers of women’s football that are both fully professional.

The crown jewel of Morocco’s football investment is the Mohamed VI Football Complex just outside Rabat.

The training complex contains four five-star hotels, eight FIFA standard pitches – one of which is indoor in a climate-controlled building – as well a medical facility that includes a dentist.

That investment, along with a crop of stellar talent and Africa’s best coach, has catapulted Morocco to the World Cup semifinals. 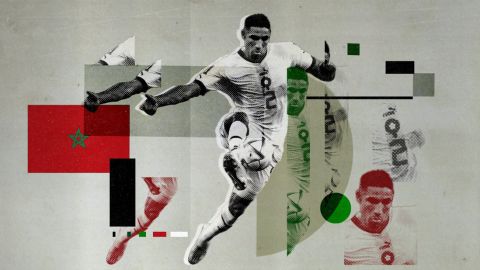 Achraf Hakimi scored a ‘panenka’ penalty to win Morocco’s first ever knock out game at a World Cup.

Going into the next World Cup in 2026, Africa will have at least nine slots compared to the five it had in Qatar, something that could similarly have a transformational effect on African performances at the World Cup.

But if those nations that did not qualify such as Nigeria, Algeria, Ivory Coast and Egypt – Algeria and Nigeria missing out on Qatar on the away goals rule – want to build on the success seen in Qatar, they will have to think about following the example of the five nations that made the continent proud.

Notably developing in its soccer infrastructure to ensure they aren’t left behind by their European and South American counterparts, something that FIFA is helping with by investing almost $600 million in a four-year cycle for the development of African Men’s and Women’s football.

There is still much work to do but after decades of African frustration and disappointment on the world stage, Qatar 2022 could be the turning point to transform the continent’s fortunes and for one of its teams to win the World Cup.