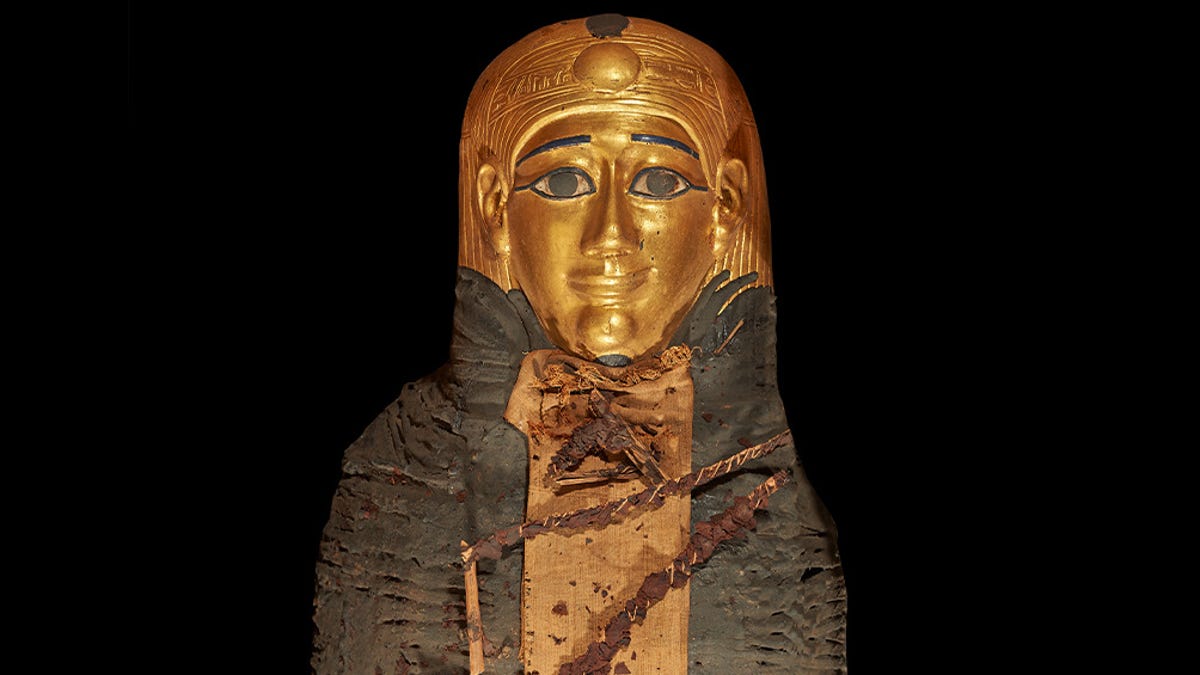 The mummified remains of a teenage boy, stored unexamined at the Egyptian Museum in Cairo for over a century, have been digitally unwrapped for the first time, revealing an excess of amulets and plants adorned his body.

In a study, published in the journal Frontiers in Medicine on Tuesday, researchers reveal that the unnamed teenager, only 14 or 15 years old, walked into the afterlife wearing a pair of white sandals. They used a computerized tomography scan, which allows for digital reconstructions of bone, blood vessels, soft tissues and more via X-rays, to peer inside the coffin.

“Here we show that this mummy’s body was extensively decorated with 49 amulets, beautifully stylized in a unique arrangement of three columns between the folds of the wrappings and inside the mummy’s body cavity,” noted Sahar Saleem, a radiologist at Cairo University, Egypt, and first author on the paper. They’ve dubbed the mummy “Golden Boy.”

Saleem notes Golden Boy’s adornments are in line with some of the rituals outlined in the Egyptian Book of the Dead, including the sandals. He was adorned with three columns of amulets between the folds of his wrappings, including items like the Eye of Horus — a scarab beetle inside his chest and a two-finger amulet beside his penis. Many of the ornaments were made of gold.

All of his organs had been removed except for his heart, and the scans revealed he also had immaculate teeth.

Golden Boy’s coffin was first discovered in 1916 at a necropolis in Nag el Hassaya, which was the cemetery of the city of Edfu. The boy lived during the Ptolemaic period between around 330 and 30 BC and was likely of high status. His cause of death is unknown but there were no signs it was unnatural.

Saleem and her colleagues had previously digitally unwrapped the mummy of Amenhotep I back in 2021 and was responsible for discovering a knife wound in the throat of Ramesses III as well as a missing toe, suggesting he was murdered by a band of assassins.

The Egyptians believed life didn’t end with death. Instead, there was an afterlife. The process of mummification and laying in ornaments, amulets and plants were designed to help the spirit of the dead navigate through the afterlife. Golden Boy provides more evidence for the funerary rituals and importance of these ornaments during the boy’s life in the Ptolemaic period.

The research led to the Egyptian Museum moving Golden Boy from the basement to its main exhibition hall where it will now be placed on display.

Florida man who allegedly beat shark on beach should be charged, according to wildlife commission