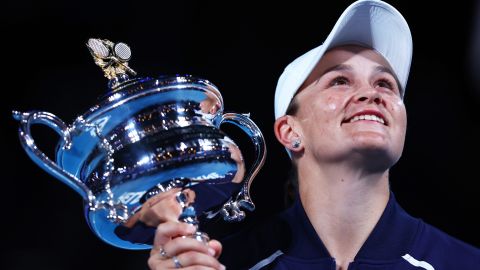 Australia’s Ashleigh Barty, who retired from professional tennis last year after winning the Australian Open, has announced on Instagram she is pregnant.

“2023 set to be the best year yet. We are so excited for our new adventure,” she wrote on Friday, posting a picture of her dog Origi and a pair of baby shoes. “Origi already the protective big sister.”

In March, Barty stunned the tennis world by announcing she was retiring from the sport at age 25 while ranked No. 1 in the world. She had won three major singles titles – the 2019 French Open, 2021 Wimbledon and the 2022 Australian Open.

Barty was the only the second reigning world No.1 in the women’s game to retire at the top, following Justine Henin, who retired in 2008.

The Australian started her professional tennis career in 2010 but took a break from the sport from 2014 to 2016, saying “it was too much too quickly.”

Only 18 at the time, she wanted to “experience life as a normal teenage girl,” she said.

She had returned to tennis full-time in 2017 and went on to dominate the sport, winning 25 of her last 26 matches.

Earlier this week, Barty announced she would be returning to Melbourne Park for this year’s Australian Open to mentor local hope Olivia Gadecki.

World No. 202 Gadecki, who received a wildcard for the year’s first grand slam, said at the United Cup in Sydney that Barty would be in her camp for the tournament that runs between January 16-29.