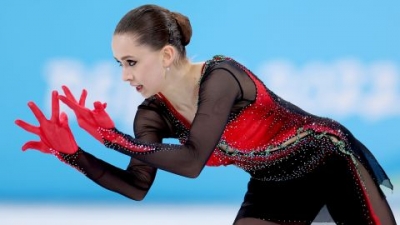 Valieva competes at the Beijing Winter Olympics earlier this year.

The World Anti-Doping Agency (WADA) has referred the case of Russian figure skater Kamila Valieva to the Court of Arbitration for Sport (CAS) after deeming the Russian Anti-Doping Agency (RUSADA) has made no progress on the skater’s Winter Olympics doping case.

In a statement on Tuesday, WADA President Witold Bańka said: “Despite putting RUSADA under formal notice to resolve the Kamila Valieva case promptly, no progress was made. Therefore, I can confirm WADA has now officially referred it directly to the Court of Arbitration for Sport.”

CAS had no comment when asked if it had received WADA’s referral but said it “will publish a media release once the appeal has been received and registered.”

Valieva, who is now 16, was suspended by RUSADA the day after she guided the Russian Olympic Committee (ROC) to victory in the team event at Beijing 2022, during which she became the first woman to land a quadruple jump in the Winter Olympics.

Russia’s Kamila Valieva competes in the women’s single skating free skating of the figure skating event during the Beijing 2022 Winter Olympic Games at the Capital Indoor Stadium in Beijing on February 17, 2022. (Photo by Antonin THUILLIER / AFP) (Photo by ANTONIN THUILLIER/AFP via Getty Images)

She had tested positive for a banned substance – the heart medication trimetazidine, which can enhance endurance – in December 2021. But the results of the failed December drug test only came to light during the Olympics when it was analyzed and reported to RUSADA.

Valieva has not publicly explained the positive test results.

The IOC’s disciplinary committee has said that Valieva blamed the positive test on a mix-up with her grandfather’s drugs, as she said he uses trimetazidine for his heart condition.

In October, RUSADA said in a statement that it had completed its investigation but was keeping the final resolution of a case involving a figure skater, who is a member of the Russian Olympic Committee and a “protected person,” confidential.

WADA responded to that RUSADA statement in October by noting that “WADA is not a party to this case but as it always does, WADA will review the outcome of the tribunal and reserves the right to lodge an appeal with the Court of Arbitration for Sport, if appropriate.”

At the time, the International Olympic Committee (IOC) said it expected RUSADA to comply with the WADA code and to handle the case swiftly to allow the International Skating Union “to define the definite results of the figure skating team competition at the Olympic Winter Games Beijing 2022 and the IOC to decide on the medal allocation.”

CNN has reached out to the IOC for comment.

Team USA finished second in the team event, Japan third and Canada in fourth. As a result of the doping controversy, no medal ceremony was held during the Games.