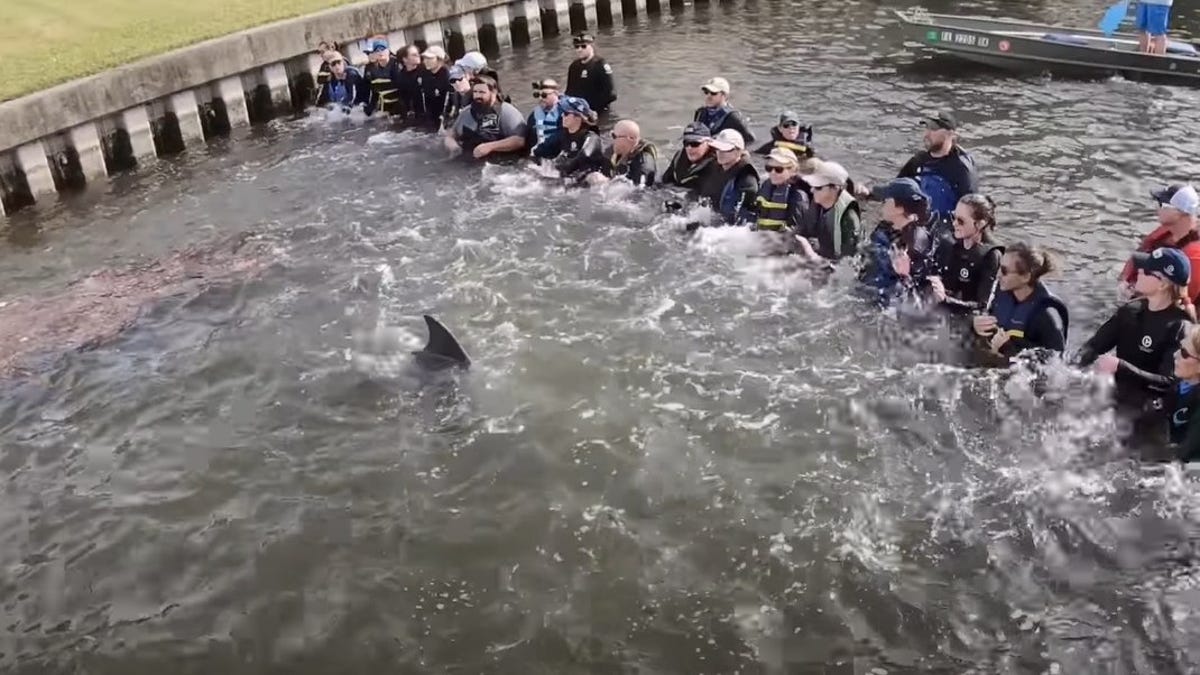 It took a lot of biologists to escort a dolphin to safety.
Video screenshot by Amanda Kooser/CNET

Here’s a recipe for a good animal rescue story: Take one residential creek, add one lone dolphin and then bring in 28 determined biologists. Mix well and enjoy the happy ending.

A young dolphin wandered off its usual path and ended up in a creek in Clearwater, Florida. Biologists with Clearwater Marine Aquarium had been monitoring the animal since Jan. 1. It appeared reluctant to return to open waters via a small opening under a bridge. “Since monitoring began, the dolphin had not left the creek,” the aquarium said last week. “This posed potential long-term problems for the animal, such as isolation from other dolphins and an increased risk of harassment and human interactions.”

Clearwater Marine Aquarium partnered with NOAA Fisheries and the Florida Fish & Wildlife Conservation Commission to escort the dolphin to safety. A team of 28 biologists got into the water to form a human chain, creating a visual and sound barrier to aim the dolphin out of the creek. Watch the effort unfold:

It’s not easy to pull off a human chain in a creek. The biologists had to stay shoulder to shoulder and navigate trees and docks without giving the dolphin an opportunity to slip by. The human encouragement worked, though there was a moment of uncertainty as the team members neared the bridge and weren’t sure if the dolphin went through.

The biologists celebrated the dolphin’s arrival on the other side. “It was very exciting after almost 20 plus days for him to finally be out of the canal,” said senior rescue biologist Brittany Baldrica.

The wandering dolphin stands a good chance back out in the wild. “We noted that the animal was in good body condition with normal respiration rates and was displaying normal behavior, such as foraging, during observations,” the aquarium said. Happy ending achieved.