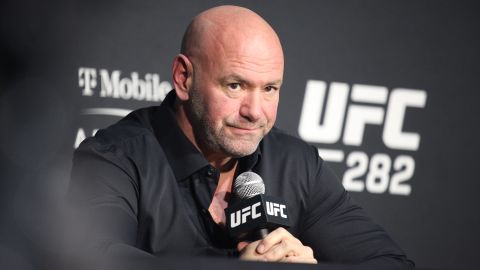 Ultimate Fighting Championship (UFC) president Dana White said he does not expect punishment after a video emerged of him in a physical altercation with his wife earlier this month. White made the comments Wednesday at a media day for UFC Fight Night 217.

Asked whether he expects there to be repercussions from the company, White said: “What should the repercussions be? You tell me. I take 30 days off? How does that hurt me?

“Me leaving hurts the company, hurts my employees, hurts the fighters. It doesn’t hurt me.

“The punishment is that I did it, and now I have to deal with it.”

In the video, obtained by TMZ, White and his wife, Anne, are seen arguing before exchanging slaps in a nightclub in Cabo San Lucas, Mexico, on New Year’s Eve. Neither White nor his wife are facing legal charges over the incident.

White claims that conversations had been held between himself, Endeavor chief executive and UFC owner, Ari Emanuel, and broadcaster ESPN over what action was appropriate.

“We’ve had plenty of discussions internally – with Ari, with ESPN – nobody’s happy,” the 53-year-old said. “Nobody’s happy about this. Neither am I. But it happened.” 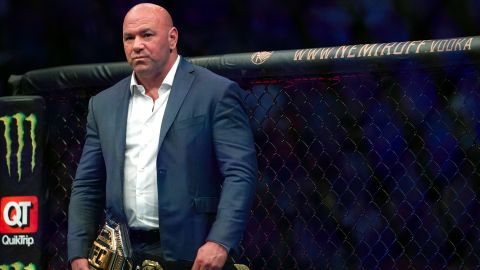 White waits to place the UFC lightweight championship belt on Charles Oliveira after the Brazilian’s victory against Michael Chandler in 2021.

White also said he was not looking to make excuses for his behavior and reiterated his stance on domestic violence.

“There’s never an excuse … There’s no defense for this and people should not be defending me over this thing, no matter what.”

On Monday, the California Legislative Women’s Caucus wrote an open letter to Emanuel and Endeavor calling for White to be replaced as UFC president.

“Given Mr White’s previous remarks against domestic partner violence, we believed that Endeavor and the UFC shared this commitment to safety, respect and accountability,” the letter reads.

“And yet, we have seen the video of UFC president Dana White, where he strikes his wife at a New Year’s Eve celebration … We were appalled. It was alarming to say the least. In the days since the video was released, you have remained silent.

“We are calling for the immediate removal of Mr White as president of UFC.”

CNN reached out to Endeavor for comment but did not immediately get a response.

When contacted for comment, ESPN gave only a short statement saying: “We have been covering the story on our platforms since it broke and will continue to do so.”

TBS has delayed the premiere of a reality series from Dana White – Power Slap: Road to the Title – by one week to January 18. TBS and CNN are part of the Warner Bros. Discovery network.