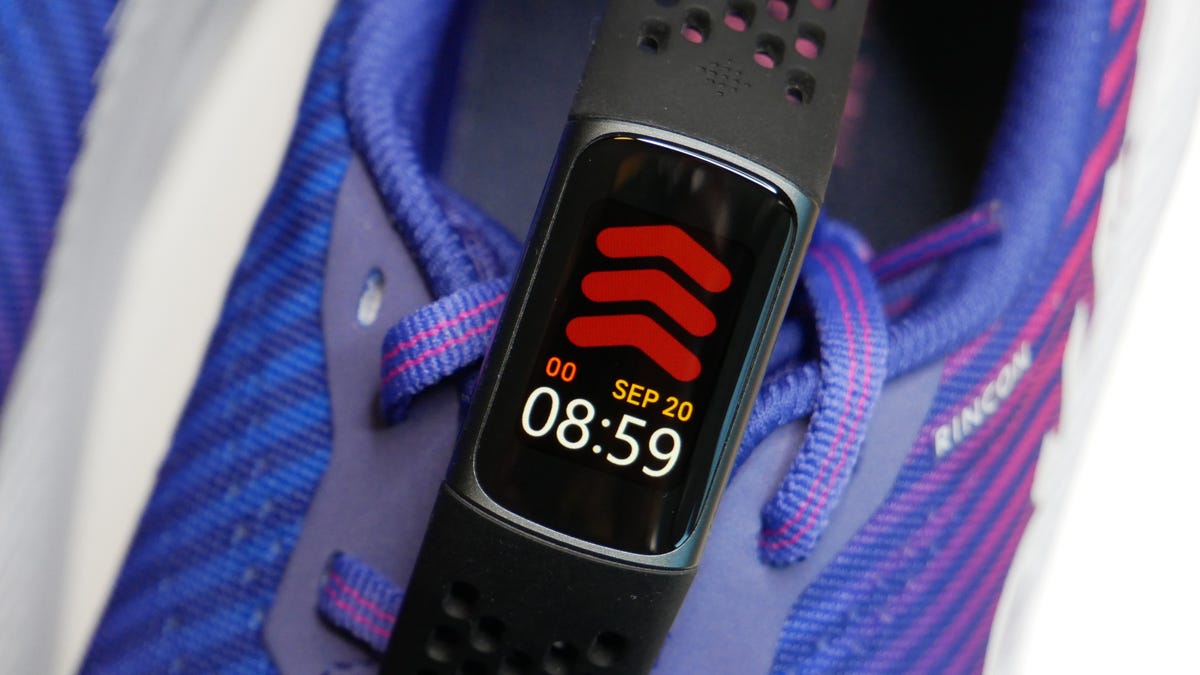 Fitbit’s watches and trackers can do a lot more than just track your steps and tell the time. If you received a new Fitbit over the holidays or picked one up to help you reach your 2023 wellness goals, it’s time to learn how to use the health tracker to its fullest. The Google-owned digital fitness company has packed its recent wearables with new updates and features, including a readiness score, sleep profiles that provide deeper analysis of your sleeping patterns and the ability to measure stress levels on the Fitbit Sense, Sense 2 and Charge 5. Google Maps and Google Wallet are also coming to Fitbit devices, which should make them even more useful for everyday tasks. 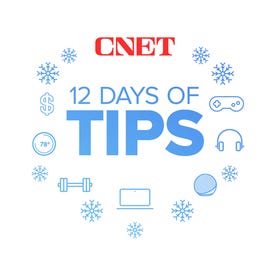 Fitbit sells a range of different trackers and smartwatches. The $350 Google Pixel Watch is the newest of the bunch and is the first Fitbit smartwatch to provide access to Google Play Store apps and offer the option for LTE connectivity. The $100 Inspire 3 is among the cheapest, while the $300 Sense 2 smartwatch is near the high end along with the Pixel Watch.

Because the software and features differ between devices, some of these tips might not work on all models. The steps listed below could also vary depending on whether you’re using an iPhone or Android device.

See the time even when the screen is off 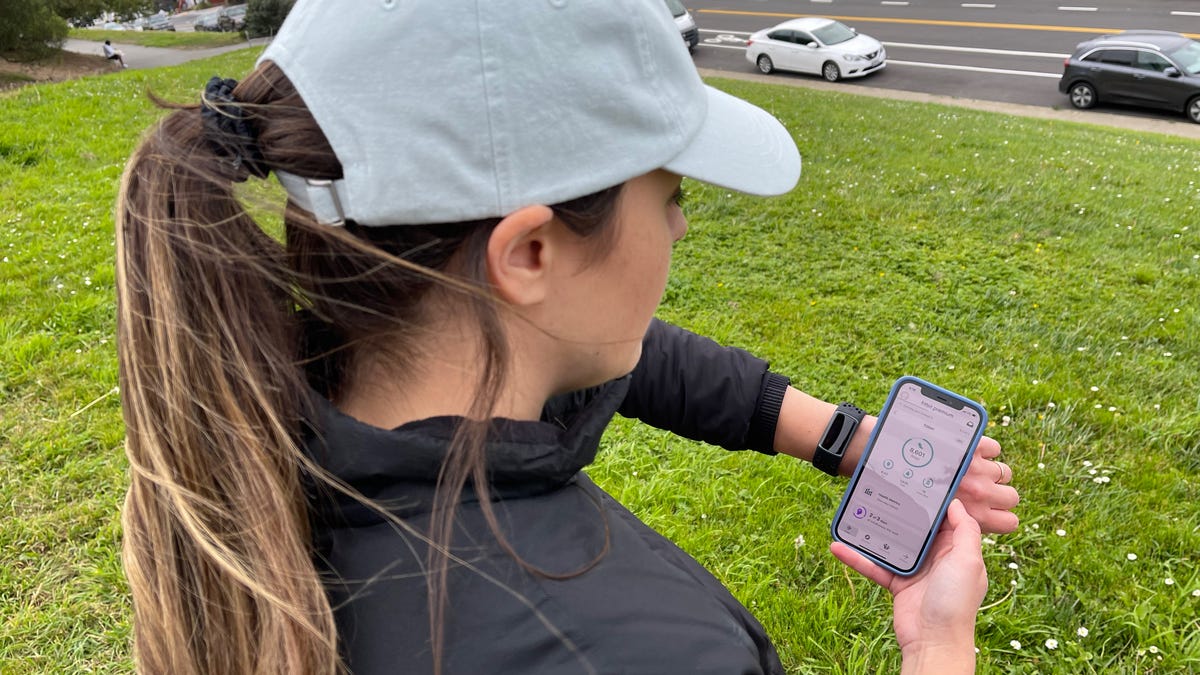 Fitbit devices are designed for fitness and activity tracking, but they double as a watch. You can make it easier to see the time at a glance without having to raise your wrist or tap the screen by enabling always-on mode. As the name implies, this makes it possible for the screen to show the time even when the display is asleep. Just remember you’ll have to sacrifice a little battery life to get this benefit.

The instructions for enabling this feature vary depending on which Fitbit you own. 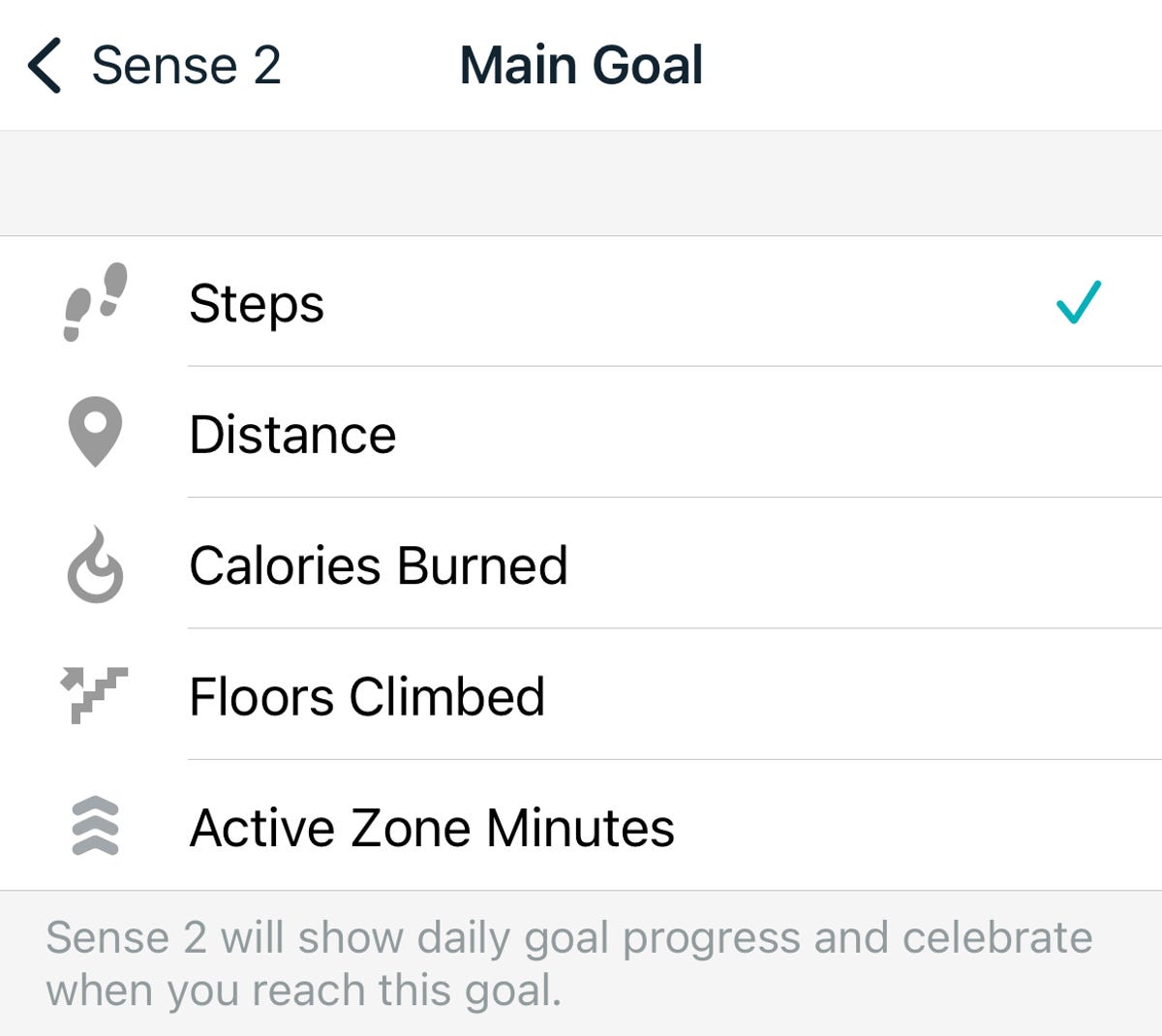 You can change your daily goal in the Fitbit app.

Goals are different for everyone, which is why you might want to consider changing the default goal on your Fitbit. This is the main metric that Fitbit celebrates upon completion each day. Choices include steps, distance, calories burned, floors climbed or active zone minutes. To choose which goal you’d like to accomplish each day, open the Fitbit app on your phone and tap your profile picture. Then, tap your Fitbit device and scroll down to Main Goal. From there, you’ll be able to select your preferred goal.

Choose which stats you want to see first during a workout 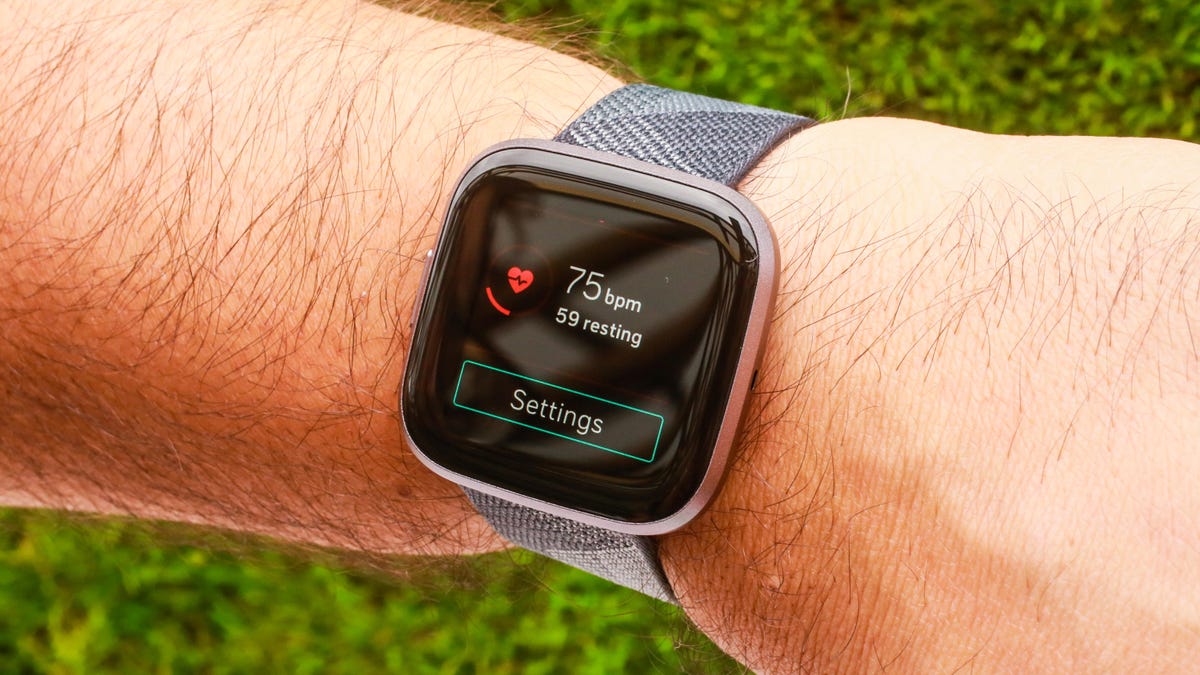 In addition to changing your daily goal, you can change which statistics you’d like to prioritize during workouts. Some people may care more about calorie burn, for example, while others prioritize heart rate. That’s why you can choose which stats you want to see during a workout on the Fitbit Sense, Versa and Ionic series.

Get started by opening the watch’s Exercise app and choosing the workout you’d like to customize. From there, tap the gear icon in the top left if you own an Ionic, Versa, Versa Lite Edition or Versa 2, and select the Customize stats option. Then, choose which stats you want to see in the top, middle and bottom slots on your device.

The directions are a little different for Fitbit Sense, Sense 2, Versa 3 and Versa 4 owners. From the Exercise app, select the workout you’d like to customize and then swipe up from the bottom of the screen to access the device’s exercise settings. Under the Show stats section, you can select the top, middle and bottom options to edit the stats you’d like to see in each slot. 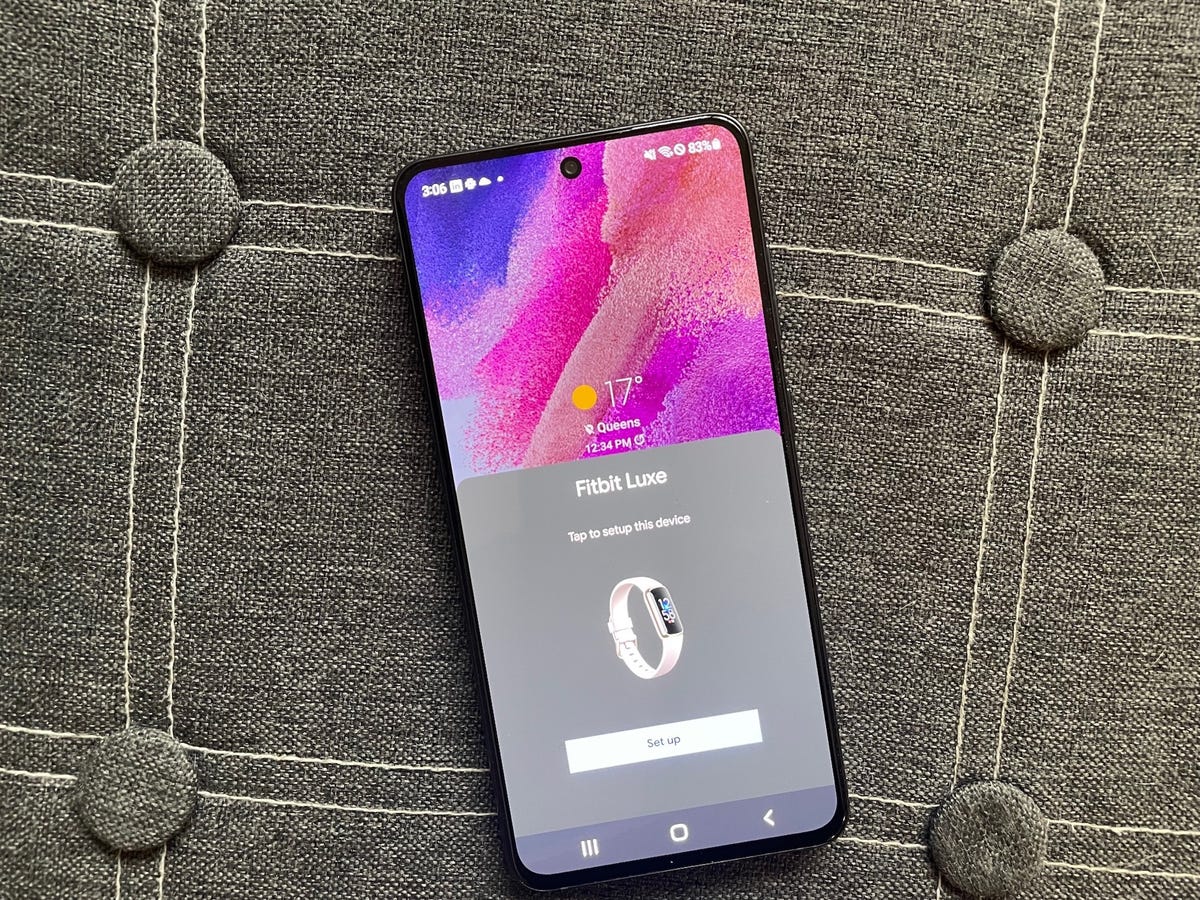 Fitbit and Google want to make setting up your new device almost effortless. Taking a page from Apple’s book, Google’s Fast Pair feature speeds up the pairing process by connecting your new Fitbit to your Android phone when the two devices are near one another. You just need to turn on your Fitbit device and make sure your phone’s Bluetooth is enabled to get started, and then you should see a prompt to download Fitbit’s app. It works on models such as the Luxe, Charge 5 and Inspire 2. 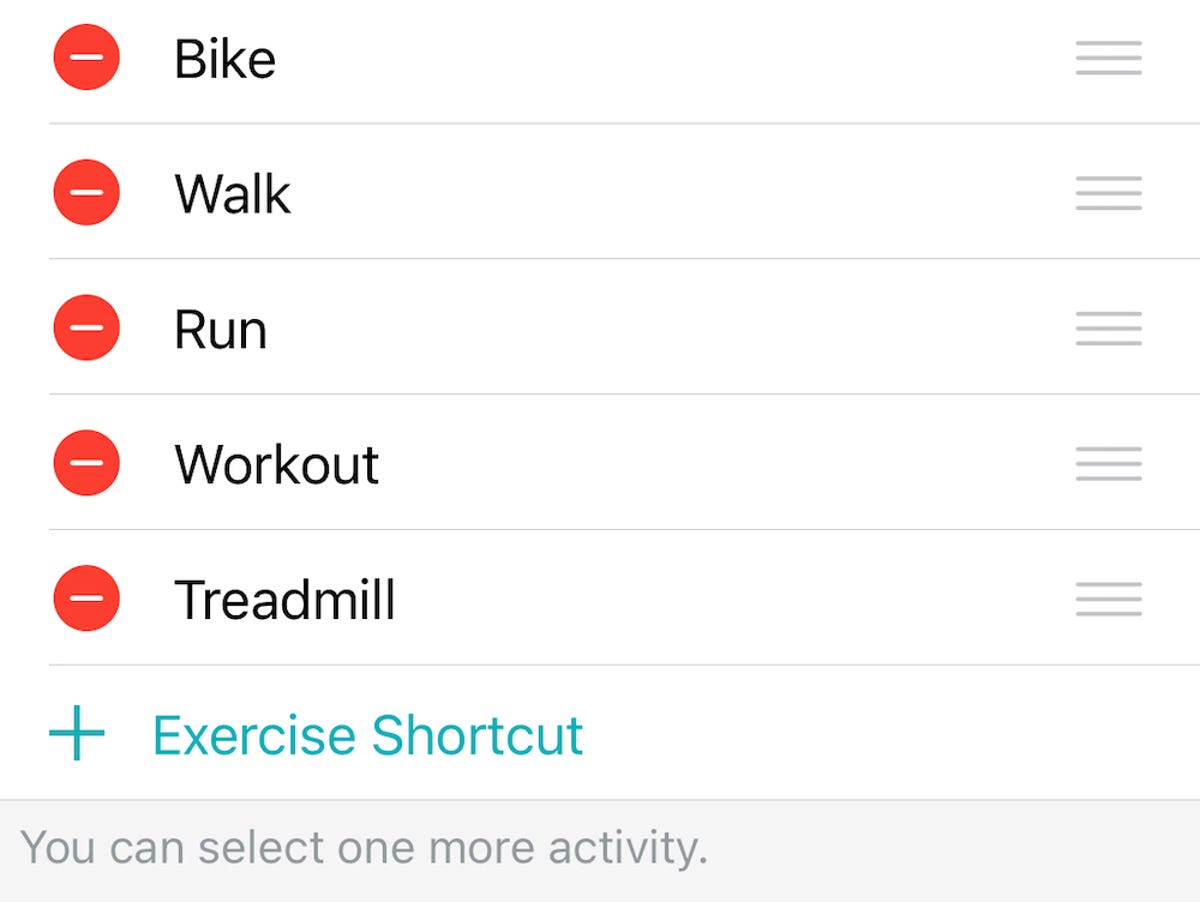 You can edit your exercise shortcuts on certain Fitbit devices.

We all prefer certain workouts over others, whether it’s running, spinning, yoga or just walking. Luckily, Fitbit lets you tailor the list of available workouts to your liking on certain devices. Just open the Fitbit app, tap on your profile picture and select your device. Then, tap Exercise Shortcuts to modify your Fitbit’s workout options. You can select the + Exercise Shortcut button to add a new activity type, swipe left on a workout to delete it or use the Edit button to reorder your workouts. Just note that the Fitbit Sense and Versa 3 do not have a shortcuts list, but Fitbit says all workout modes are available in the exercise app for the Sense, Versa and Ionic series watches.

Start an exercise with a single press on the Fitbit Sense 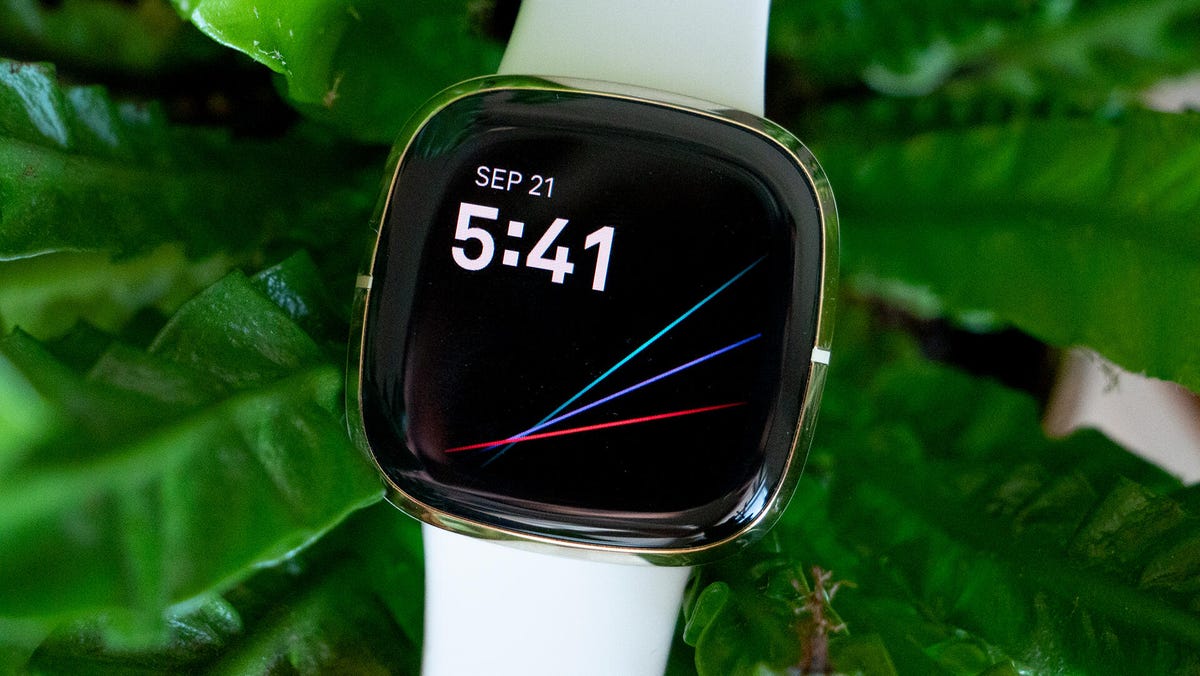 Press and hold the side button, and your watch will pull up several different apps and features that can be launched by long pressing this same button. Options include the alarms app, weather, Spotify and your voice assistant of choice. Scroll down until you see Exercise, and select the workout mode you’d like to launch when long pressing the side button. If you don’t want to choose a specific workout, you can also choose to have the exercise app open when the side button is long pressed.

Additionally, you can customize the side button’s long press actions through the Fitbit Sense’s settings menu. Swipe over to the Sense’s app screen and tap the Settings icon. Choose Shortcuts, and then select the Press & Hold option. From there, tap Exercise and choose the activity you’d like to launch when long pressing the wake button.

Find your lost Fitbit Inspire 2 with the Tile app 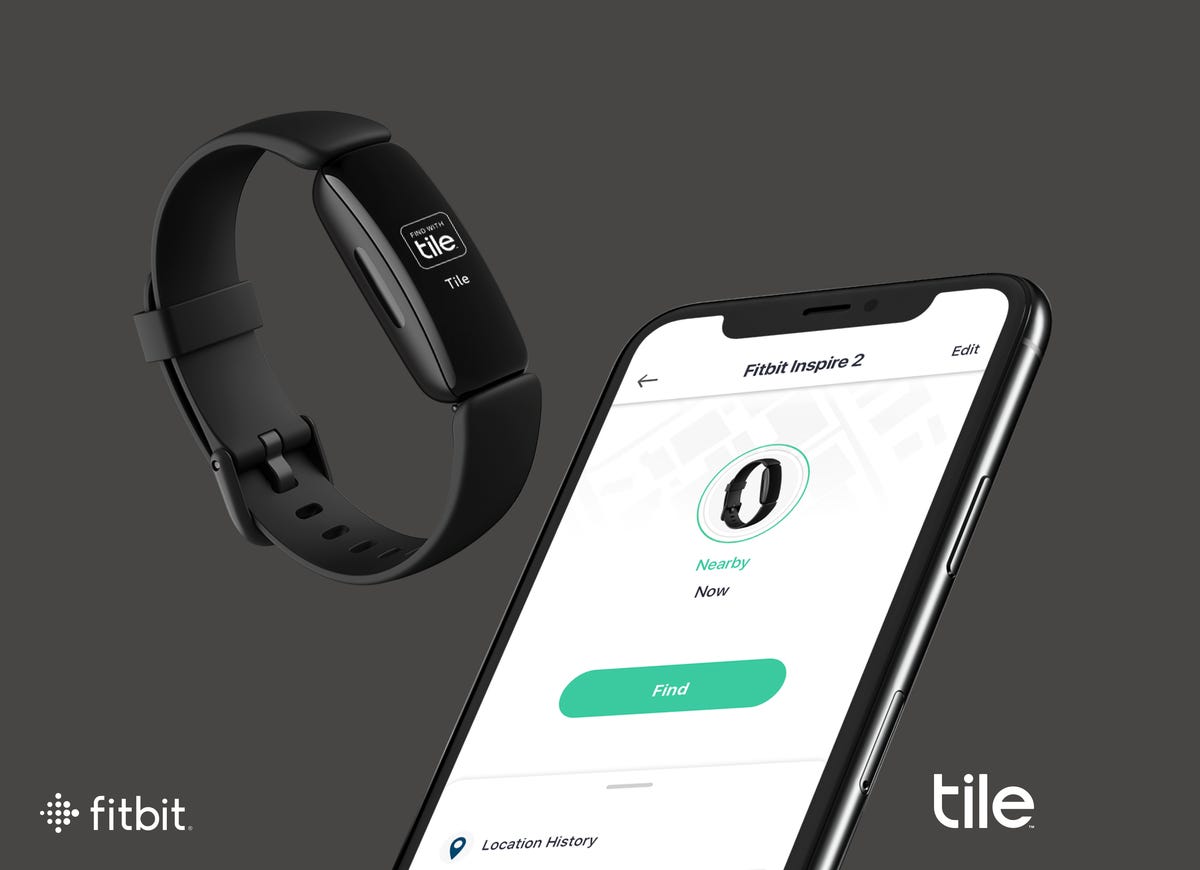 Smaller fitness trackers such as the Inspire 2 can be easy to lose or misplace. That’s why Fitbit has partnered with Tile to build its Bluetooth location-tracking service directly into the Inspire 2. You’ll have to download Tile’s app and make sure your fitness band’s software is up to date before using it. But once it’s set up and registered in the Tile app, you’ll be able to ring your Inspire 2 if it’s within Bluetooth range or see its last location on a map.

Use your Fitbit to find your phone 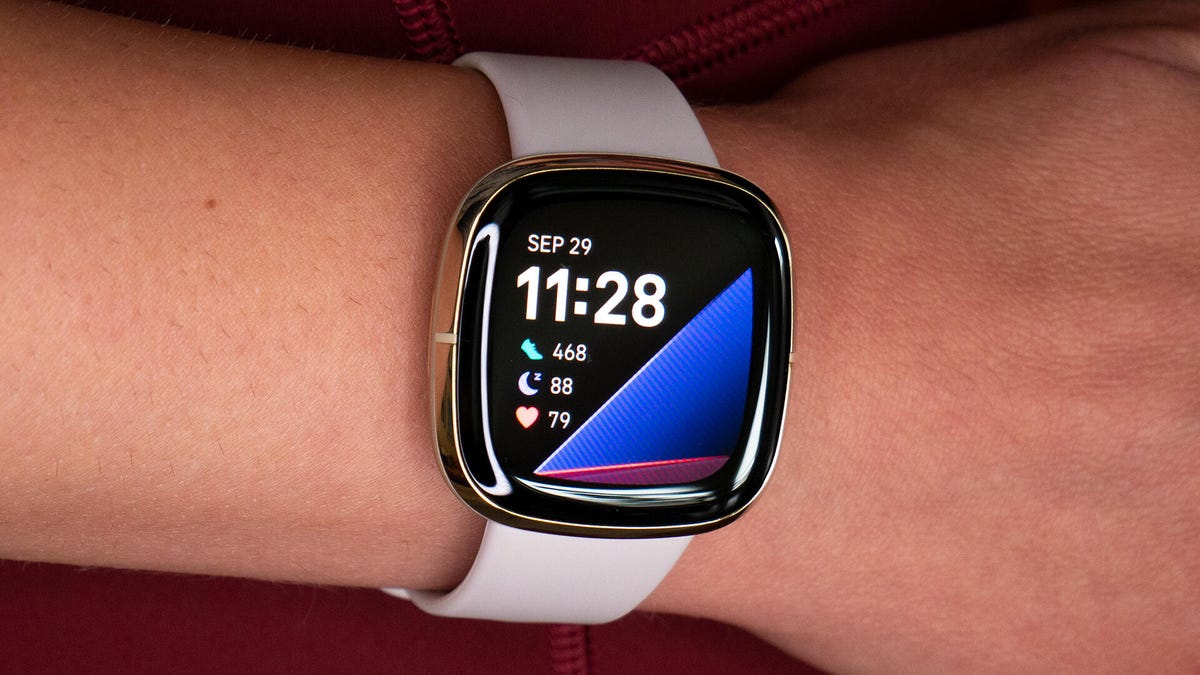 We’ve all been there; maybe you left your phone in your jacket, or perhaps it slipped in between the couch cushions. That’s where Fitbit’s Find My Phone app comes in handy. Just open the app on your watch and your Fitbit will prompt your phone to ring and vibrate until it’s found. The Fitbit app must be running on your phone for this feature to work, and it’s available on the Fitbit Sense, Versa 2 and Versa 3. 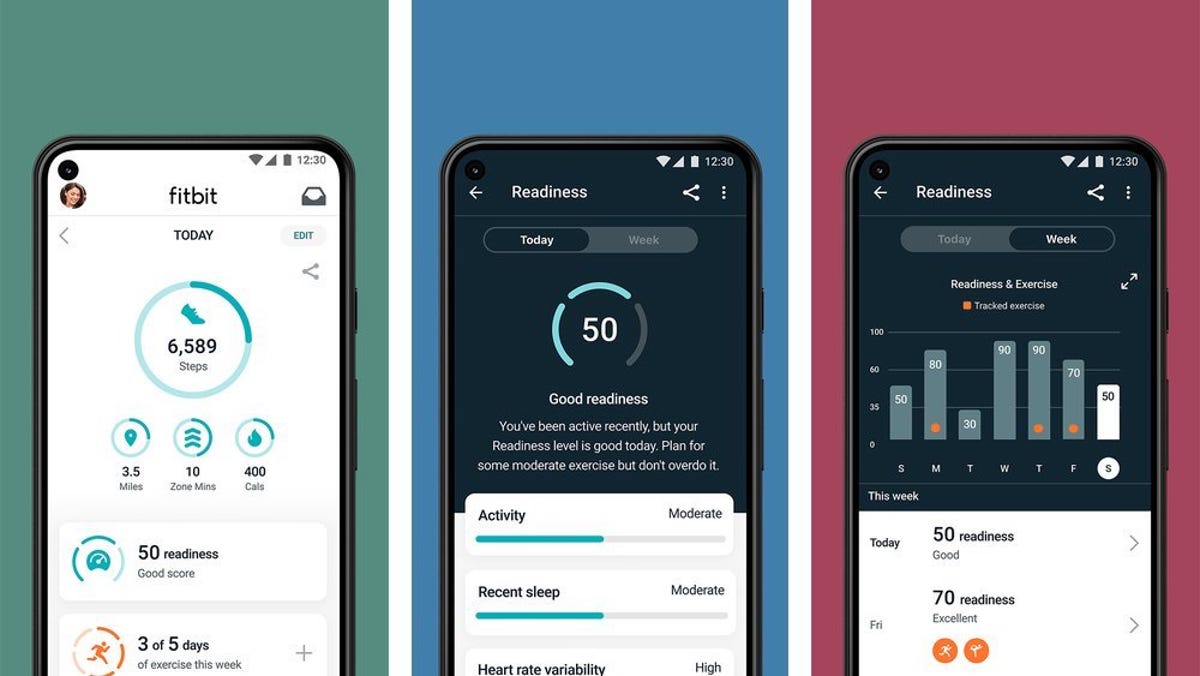 Sometimes it can be hard to tell whether it’s time to push yourself or take a rest day. Fitbit is trying to help with its Daily Readiness Score feature, which rolled out in November and is similar to the Oura ring’s Readiness Score. Fitbit issues a score based on factors like your recent sleeping habits, heart-rate variability and activity that indicates whether you should exercise or prioritize recovery.

It works on the Fitbit Sense, Versa 3, Versa 2, Charge 5, Luxe and Inspire 2, but it’s only available for Premium subscribers and must be enabled in the Fitbit app. You also have to wear your device for at least four days, including overnight. 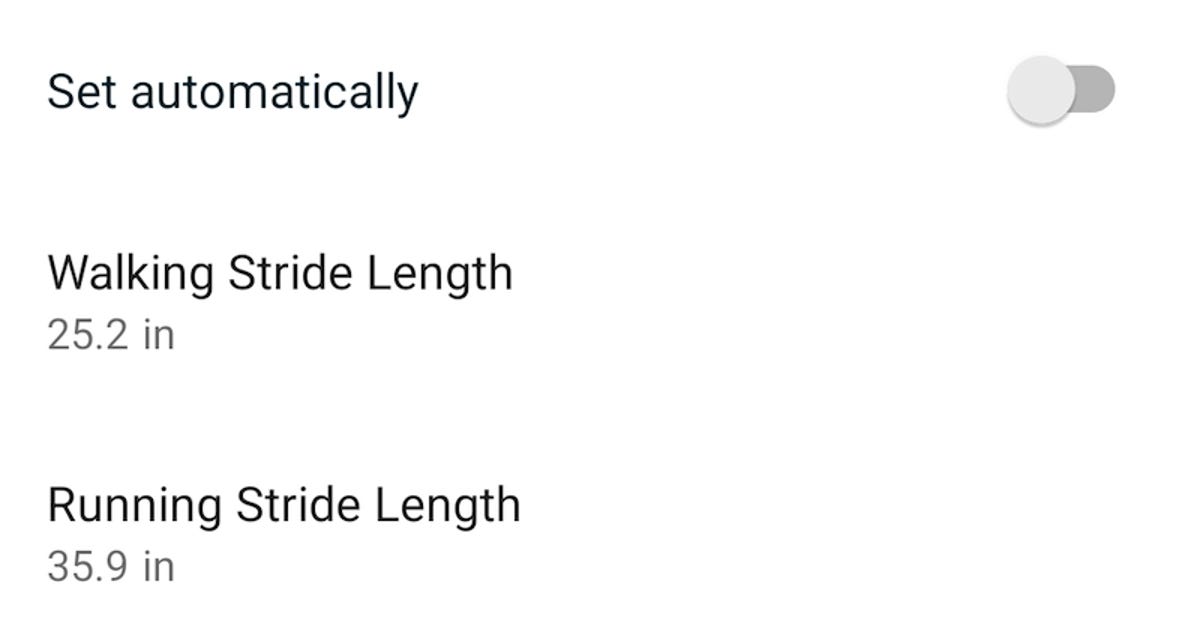 Fitbit automatically calculates your stride length after you track a run with GPS. But you can also measure your own stride length and add it to the app manually. To do so, Fitbit suggests counting your steps as you walk or run at a location where you can easily tell the distance, such as a track. You should also travel at least 20 steps when measuring your stride, according to Fitbit. Then, divide the distance traveled in yards or meters by the number of steps.

Once you’ve measured your stride length, open the Fitbit app and tap on your profile picture in the top right corner. Under Settings, choose Activity & Wellness and tap Exercise. Tap Stride Length and enter your measurements.

Listen to your exercise stats during a workout

Fitness trackers make it easier to see exercise statistics at a glance, but it’s not always feasible or comfortable to look down at your wrist during a workout. That’s why Fitbit’s app can dictate certain metrics audibly, such as distance, time, average pace, split pace and calories burned. You can choose which of these stats you’d want to hear during your workout, and also customize the frequency of alerts by distance or time.

Open the Fitbit iPhone app, tap your profile picture and scroll down to the Activity & Wellness category under Settings. Tap Exercise and scroll down to see the Play During Exercise option, which can be found underneath the list of auto recognized exercises. If you’re using the Android app, tap the exercise tile in the Today feed and press the stopwatch icon in the top right corner. Then, toggle the switch next to Use voice cues to enable or disable this option.

Turn off those reminders to move

We can all probably use a reminder to get up and move around for a bit, especially when working from home. But those little nudges may not be helpful for everyone, and some might find them annoying. To turn move reminders on or off, open the Fitbit app on your phone and tap your photo in the top left corner. Choose your Fitbit device from the list, and scroll down to the Reminders to Move option. From here, you can turn reminders on or off completely, or set them for certain time windows or days of the week.