This Next-Generation Display Technology Is Going to Change the World 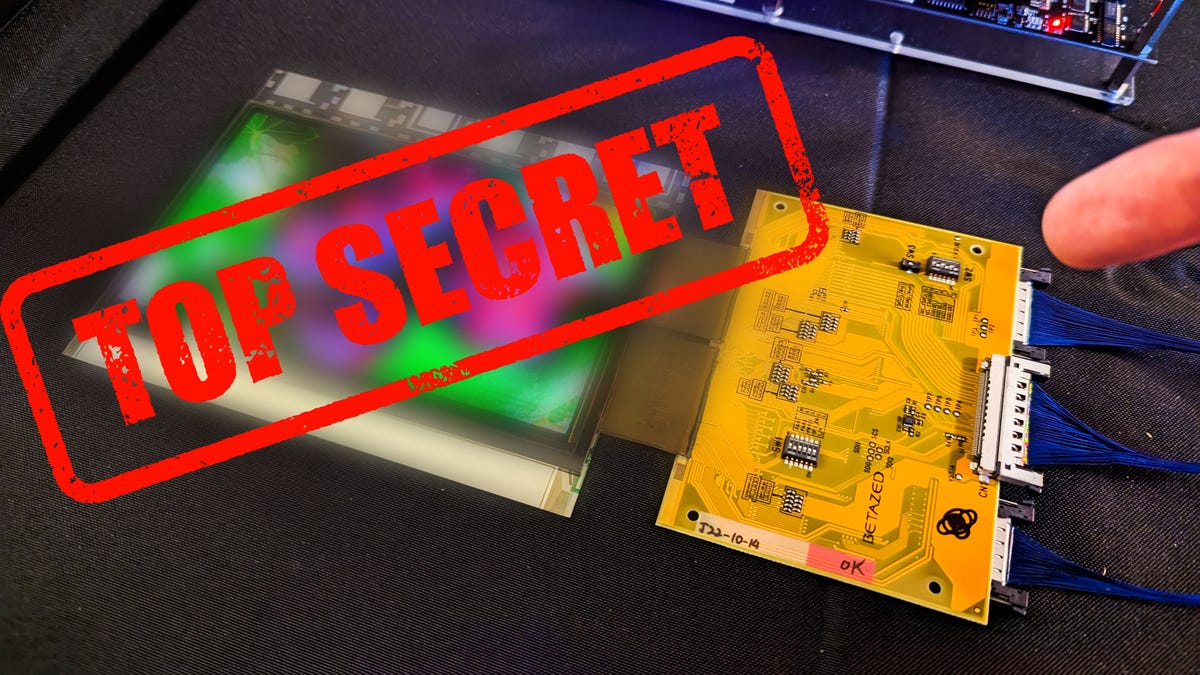 The electroluminescent quantum dot prototype I saw was so secret I had to blur it.
Geoffrey Morrison/CNET

I saw the future at CES 2023, and I wasn’t even planning on going. That show is a grind, and even if I didn’t have to go, I didn’t want to. However, a few weeks before CES this year, Nanosys, a company whose quantum dot technology is in millions of TVs, offered to show me a top-secret prototype of a next-generation display. Not just any next-gen display, but one I’ve been writing about for years and which has the potential to dethrone OLED as the king of displays. I booked a hotel immediately.

What could be so interesting that I’d drive eight hours round trip to see it? Electroluminescent quantum dots. These are even more advanced than the quantum dots found in the TVs of today. They could possibly replace LCD and OLED for phones and TVs. They have the potential of improved picture quality, energy savings and manufacturing efficiency. A simpler structure makes these displays theoretically so easy to produce, they could usher in a sci-fi world of inexpensive screens on everything from eyeglasses to windscreens and windows.

The prototype I saw at CES wasn’t simple, however. Inside the Nanosys suite at the Westgate hotel, a short walk from the convention center, tables against the walls showed different TVs and monitors featuring quantum dots. And there on one table, farthest from the door, was the 6-inch prototype I had come to see. A maze of wires connected it to multi-tiered circuit boards. It was impossibly flat, like a vibrantly glowing piece of paper. A gallery of colorful nature images cycled through on screen, the de-facto standard content for pre-production display demos.

It felt like I was staring at something from the future, because, basically, I was. It’s so cutting-edge, Nanosys said I could only show a blurred image and couldn’t take any video. They told me their as-yet-unnamed manufacturing partner is going to be talking more about the technology in a few months, however, so hopefully we’ll learn more soon. In the meantime, here’s what I can tell you.

The QD past and present 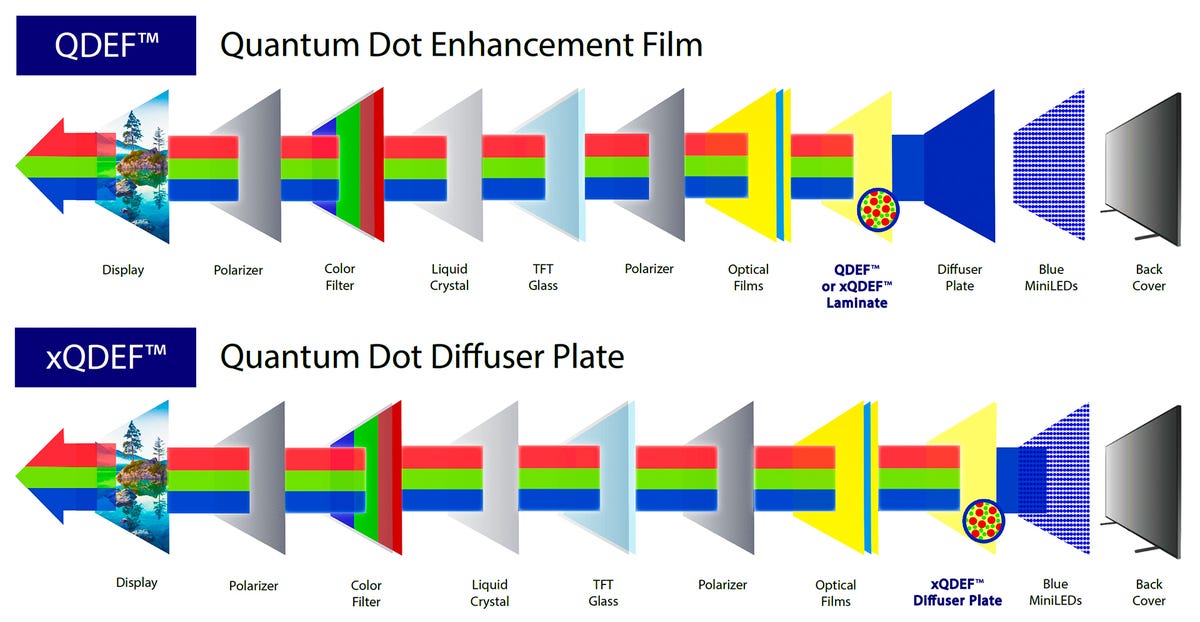 Two of the current methods of adding quantum dots to LED LCD displays. The main difference is being able to add the QDs to the diffuser plate instead of it having its own film layer.

Let me back up a moment. Quantum dots are tiny particles that when supplied with energy emit specific wavelengths of light. Different size quantum dots emit different wavelengths. Or to put it another way, some dots emit red light, others green, and others still, blue. There are more possibilities, but for display tech, RGB is all you need. They’re also extraordinarily efficient, almost perfectly emitting the same amount of energy absorbed.

For the last few years, quantum dots have been used by TV manufacturers to boost the brightness and color of LCD TVs. The “Q” in QLED TV stands for “quantum.” Originally only found in high-end TVs, quantum dots now found in mid- and lower-end TVs from brands including Samsung, TCL, Hisense, LG and Vizio. They enable improved color, higher HDR brightness and more. 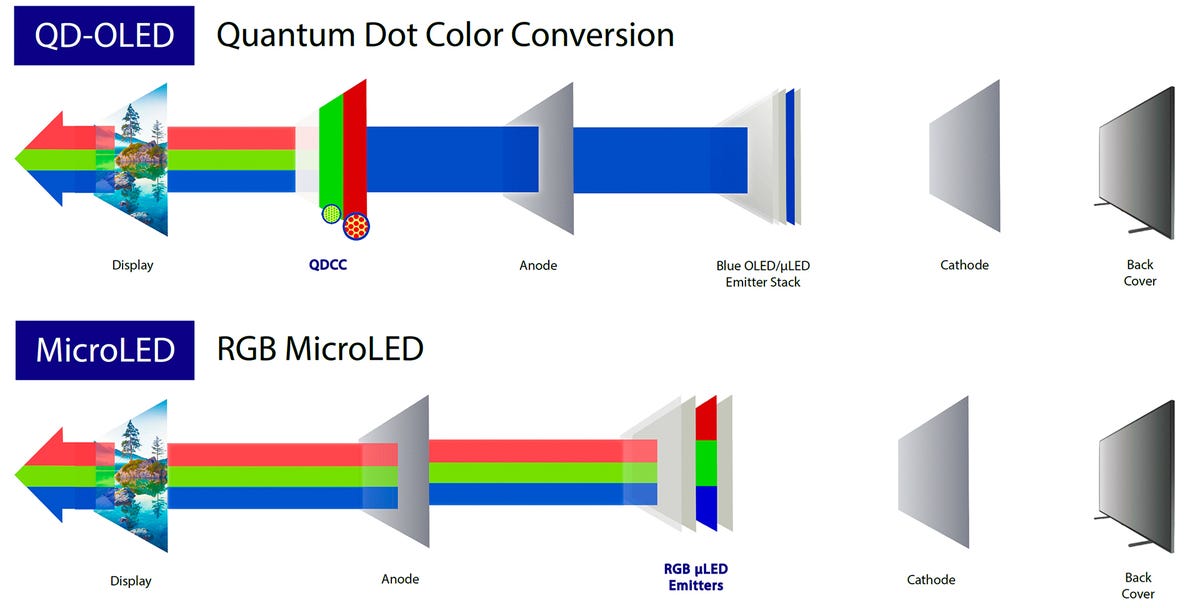 How quantum dots are added to QD-OLED and microLED displays. In the case of the former, the whole panel is essentially blue OLED pixels, some are converted using QD to be red or green. In the case of the latter, QDs are incorporated into the microLEDs themselves.

More recently, Samsung combined quantum dots with the incredible contrast ratios of OLED. Their (and partner Sony’s) QD-OLED TVs have some of the best image quality of any TV ever.

Until now, quantum dots were always a supporting player in another technology’s game. A futuristic booster for older tech, elevating that tech’s performance. QDs weren’t a character on their own. That is no longer the case. 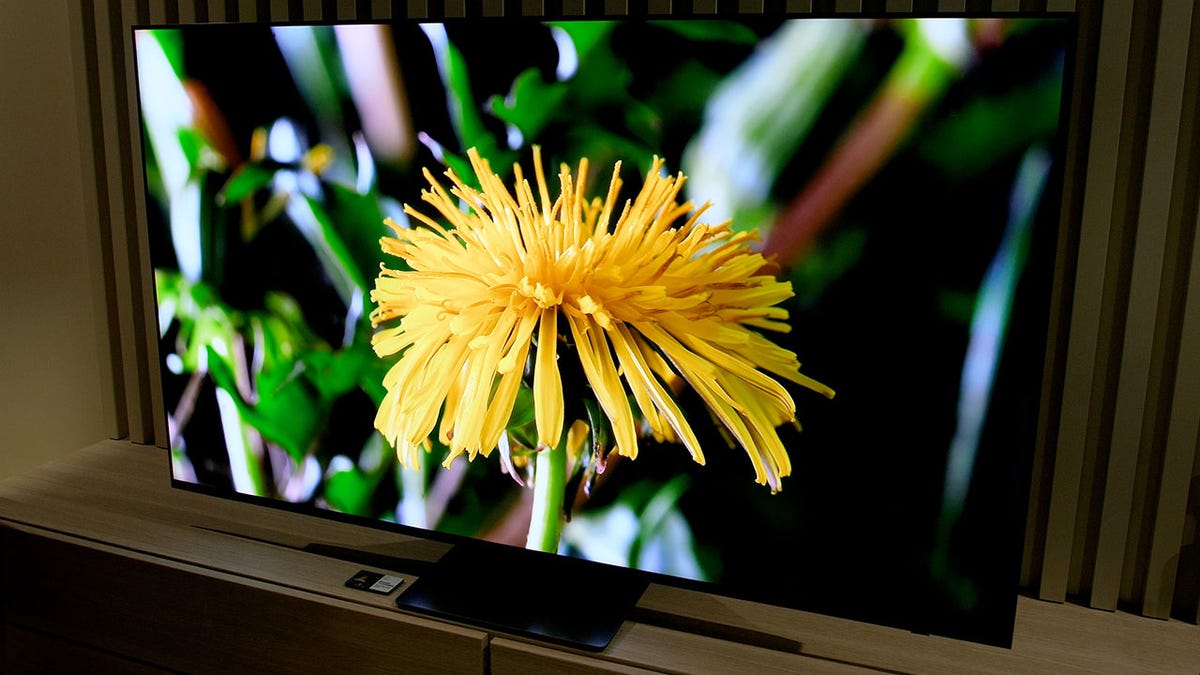 The quantum dots used in display tech up to this point are what’s called “photoluminescent.” They absorb light, then emit light. With LED LCD TVs, this usually meant LEDs emitting blue light. This blue light would be the blue light you’d see on the TV, but it was also used to cause red and green quantum dots to emit their own colored light. So what you’d see on screen is blue light from the LEDs, and red and green light from the quantum dots, all combining to help create an image. There are a variety of ways to implement this process, but that’s the basic idea.

Direct view, electroluminescent quantum dot displays. You can think of it like a traditional LED LCD or OLED display, but instead of LCD or OLED pixels, it’s pixels made of just quantum dots. Note the far fewer layers, which theoretically should mean lower production costs and other benefits.

The prototype I saw was completely different. No traditional LEDs and no OLED. Instead of using light to excite quantum dots into emitting light, it uses electricity. Nothing but quantum dots. Electroluminescent, aka direct-view, quantum dots. This is huge.

Or at least, has the potential to be huge. Theoretically, this will mean thinner, more energy-efficient displays. It means displays that can be easier, as in cheaper, to manufacture. That could mean even less expensive, more efficient, bigger-screen TVs. The potential in picture quality is at least as good as QD-OLED, if not better. The tech is scalable from tiny, lightweight, high-brightness displays for next-generation VR headsets, to highly efficient phone screens, to high-performance flat-screen TVs. 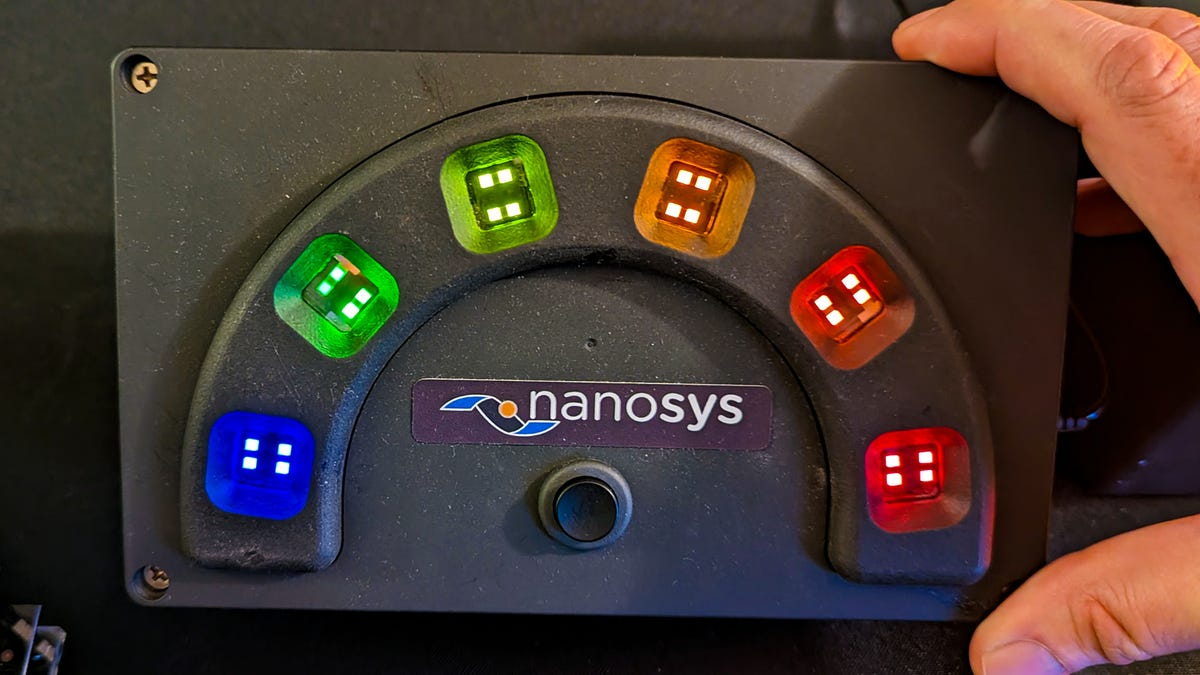 Nanosys calls this direct-view, electroluminescent quantum dot tech “nanoLED” which, for the record, I don’t like. The TV marketplace is filled with “LED” things and I think it’s a bit of a stretch to ask the average person to understand “nano” is different from “micro” and “mini.” But hey, if I was good at marketing, I’d be a lot better paid.

The potential with TVs and phone screens is exciting, but that’s not where the potential of electroluminescent QD ends. Having what amounts to a simpler display structure, you can incorporate QD-based displays in a wider variety of situations. Or more specifically, on a wider variety of surfaces. Essentially, you can print an entire QD display onto a surface without the heat required by other “printable” tech.

What does this mean? Just about any flat or curved surface could be a screen. This has long been the promise of a variety of technologies, not to mention countless sci-fi shows and movies, but electroluminescent QD has the potential to actually make it happen.

For instance, you could incorporate a screen onto the windshield of a car for a more elaborate, high-resolution, easy-to-see, heads-up display. Speed and navigation directions for sure, but how about augmented reality for safer nighttime driving with QD-display-enhanced lane markers and street signs? Or imagine a windscreen that can show you, without taking your eyes off the road, where other cars are around you. These types of QD-displays could have a light transmission of 95%, meaning they’d look pretty much exactly like normal glass when off. 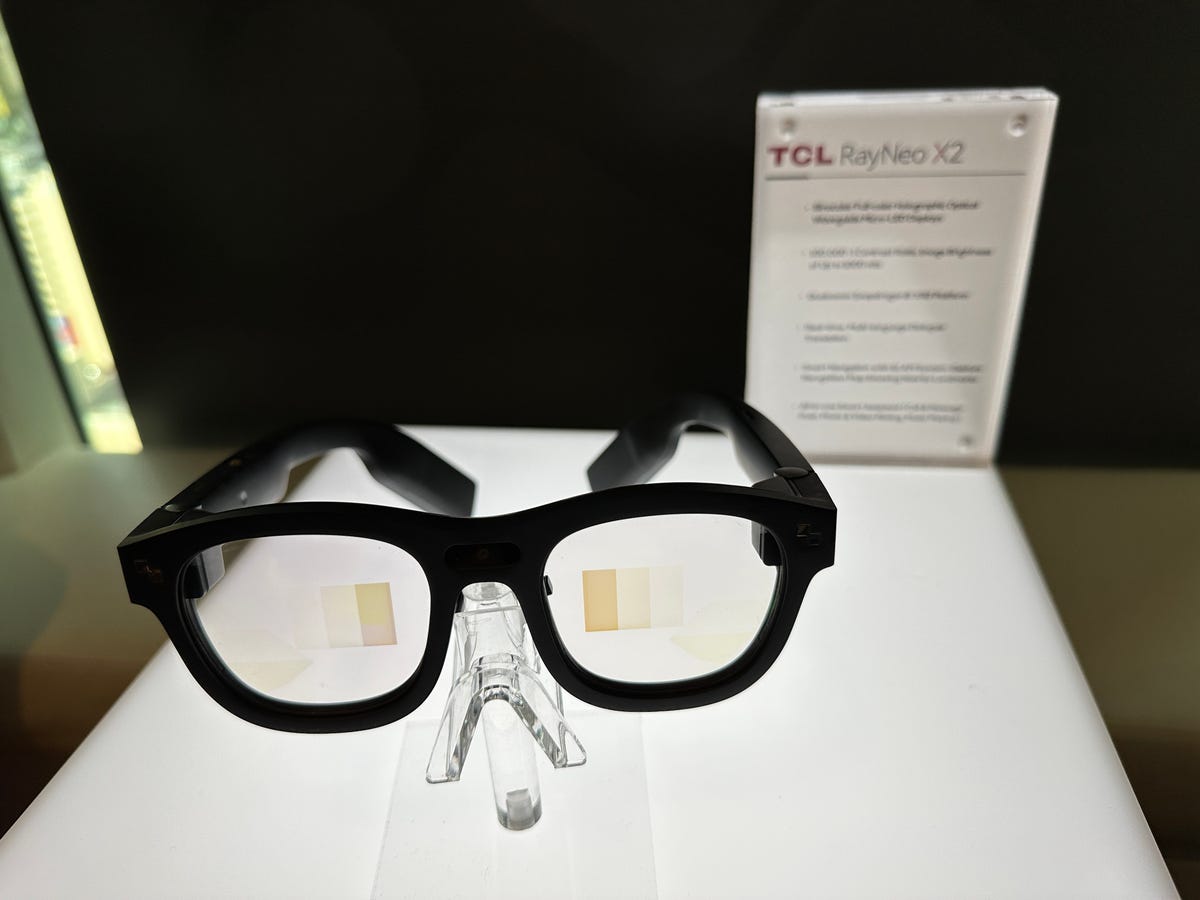 AR glasses, like the TCL versions seen here that use MicroLED technology, are one possible use for electroluminescent quantum dots.

Since I first got eyeglasses, I dreamed about having a screen built in that could show me info like in a video game. AR glasses have been a thing, but they’re bulky, low resolution and, to be perfectly honest, lame. A QD display could be printed on the lenses themselves, requiring less elaborate electronics in the frames. They could look just like regular eyeglasses, but show incoming message info, a video call, maps, or a movie. It’s all very cyberpunk.

We Tried These 48-Megapixel AR Glasses From DigiLens…

Pretty much any surface could work like this. I think an obvious early use, despite how annoying it could be, would be bus or subway windows. These will initially be pitched by cities as a way to show people important info, but inevitably they’ll be used for advertising. That’s certainly not a knock against the tech, just how things work in the world.

Beyond the quantum realm 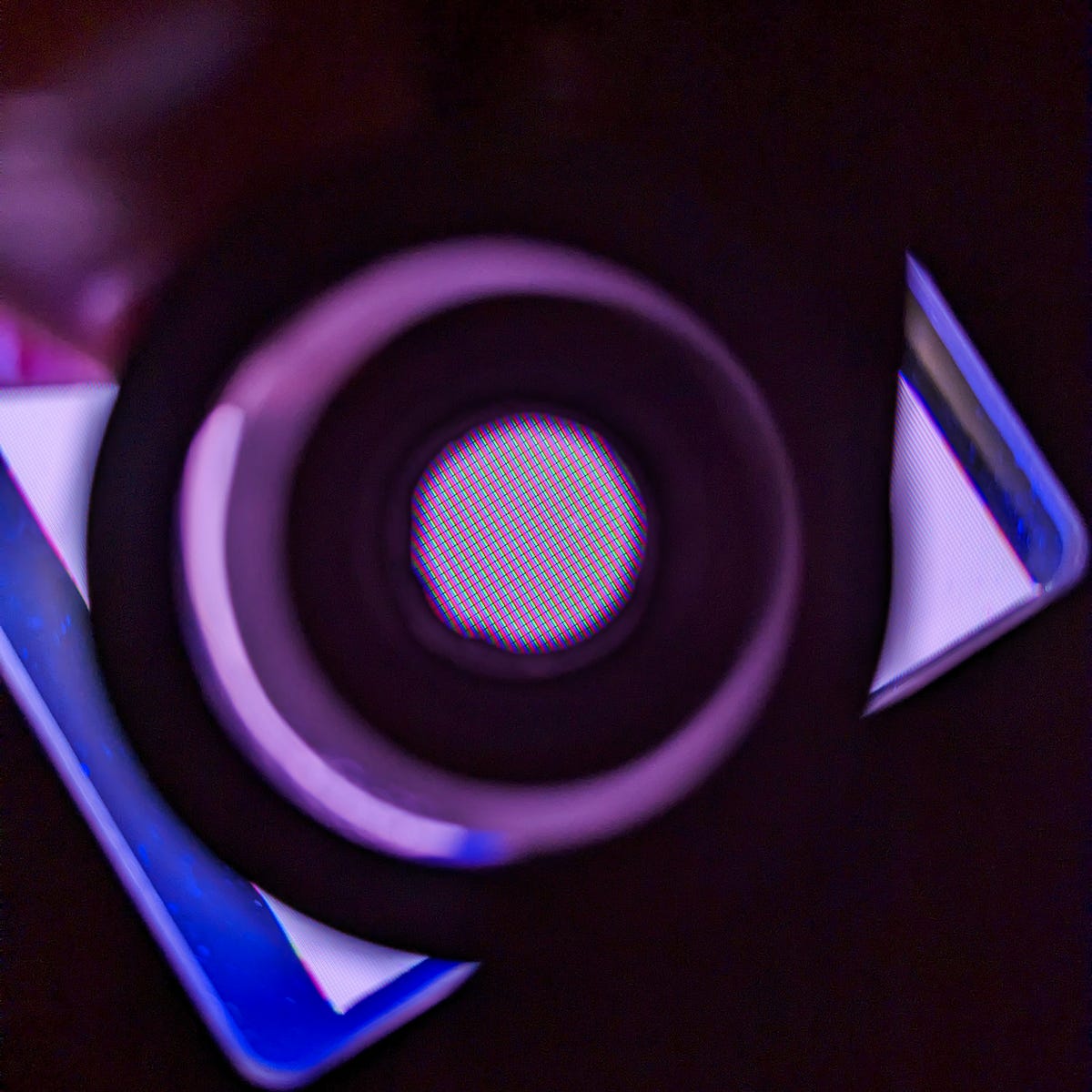 A closeup of a pixel from a quantum dot color conversion film.

The history of CES is littered with advanced prototypes that never came to market, relegated to history and the minds of bald, bespectacled tech journalists. Nanosys has a solid history, and works with the biggest names in the manufacturing world. This is what they’ve been working towards for years. It was always at the edge of the timeline they’d share every year. When I first met with them several years ago, the first displays with quantum dots were about to hit the market. Now they’re everywhere. A few years after that, they talked about adding QD to OLED. Now those are here. QD on its own, direct-view electroluminescent QD, was always their goal. And now it’s here. 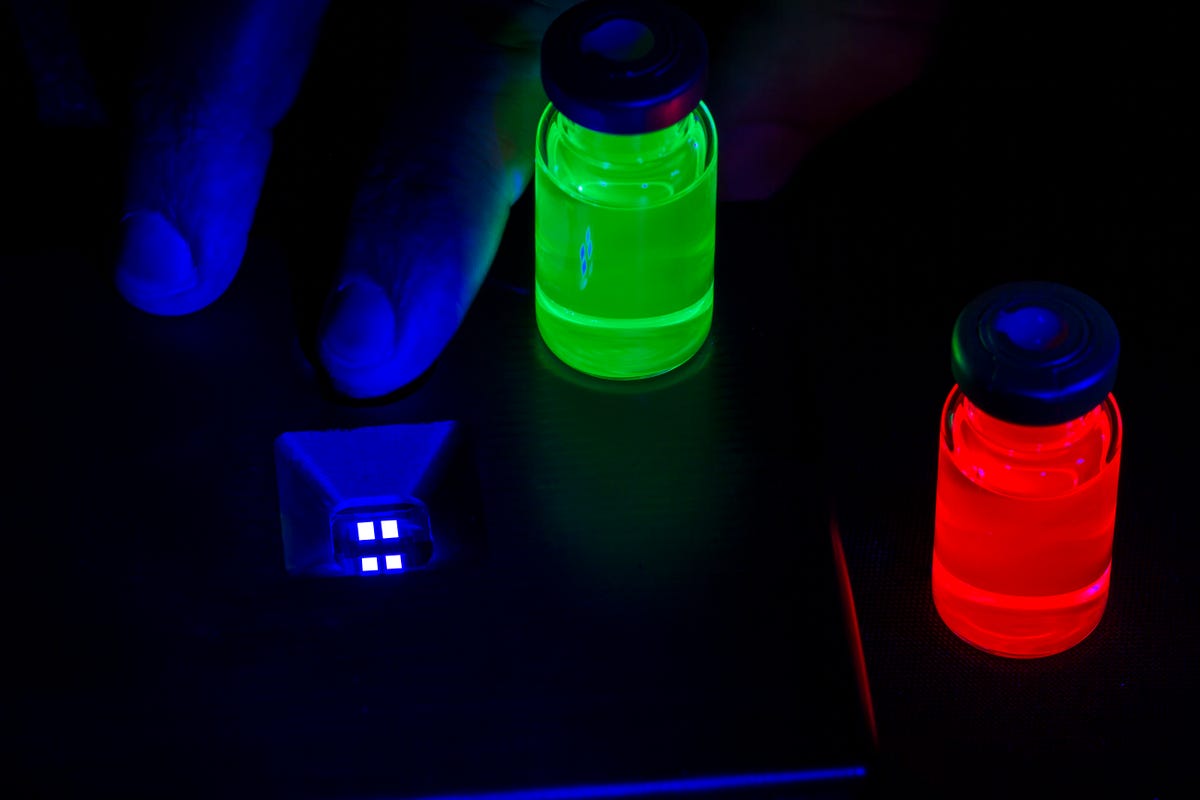 The cost of early production will determine what size we’ll see initially. Phones and VR headsets first, then TVs later? Could be. TV manufacturing facilities are expensive to build, and companies aren’t going to want to convert or close older factories before getting a full return on investment. So it’s likely we’ll still have legacy LCDs with quantum dots alongside QD-OLED alongside direct-view QD on store shelves for the near future.

Beyond that, who knows? Some new tech will certainly come along that will be even better. But 5-10 years from now we’ll almost certainly have options for QD displays in our phones, probably in our living rooms, and possibly on our windshields and windows.

Yep, seeing that was definitely worth the visit to CES.