The Doomsday Clock Has Moved: How Close Are We to Armageddon in 2023? 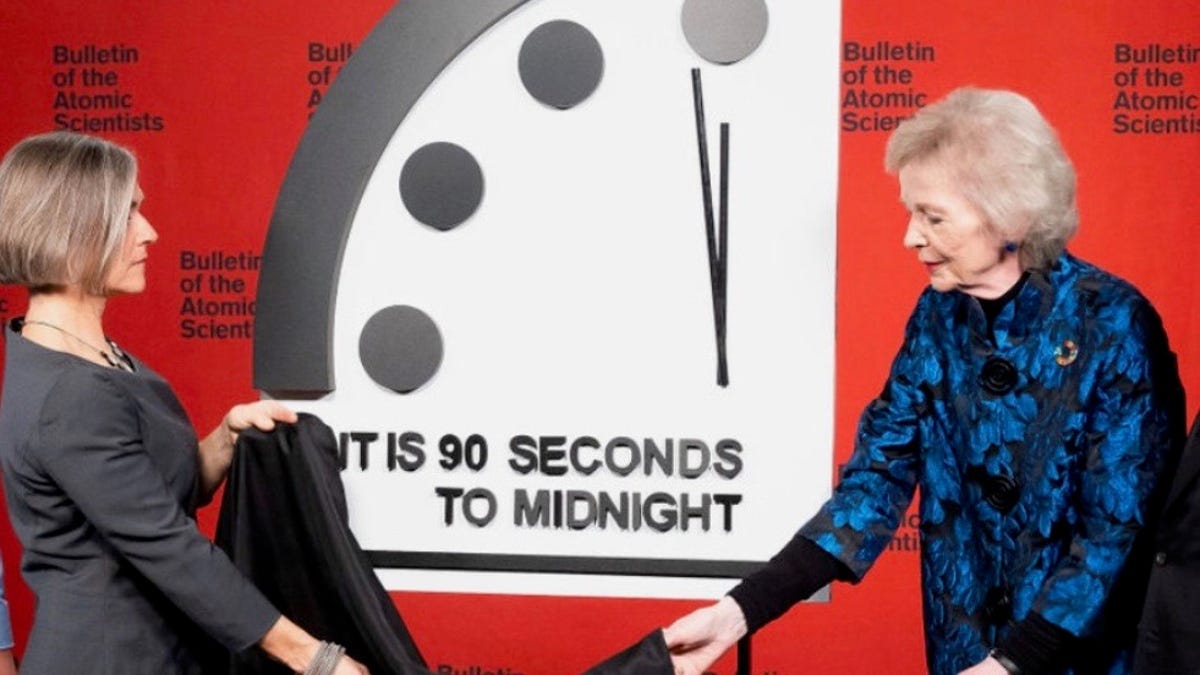 The Doomsday Clock in 2023.
Bulletin of the Atomic Scientists

Planet Earth has seen its share of horrors over the last three years. Sorry to get all doom and gloom, but we’ve struggled through a global pandemic that’s yet to ease, food insecurity, worsening weather events and the ever-present threat of nuclear conflict. Last year also saw the Russian invasion of Ukraine, which has resulted in extreme loss of life and livelihoods.

Quietly ticking in the background of all this is the Doomsday Clock, an unnerving symbol of our proximity to The End of All Things. But what exactly is it and how is it maintained and monitored?

Let’s break it down.

What is the Doomsday Clock?

The Doomsday Clock is pretty much what it sounds like — a clock assessing the world’s dangers, and how close we are to self-destruction. A group of scientists who publish the Bulletin of the Atomic Scientists created the clock in 1947. And these aren’t just any scientists — the bulletin was founded by Albert Einstein, J. Robert Oppenheimer, Eugene Rabinowitch and University of Chicago thinkers who helped develop the first atomic weapons in the Manhattan Project. If anyone knows the dangers facing the world, they did.

There was a print version of the bulletin until 2009, and now it’s online. Every January, the group announces how much they’re adjusting the clock, and why they’re doing so.

What is the Doomsday Clock set at now?

When is it adjusted?

Every January, the scientists assess how close the world is to ending, in their view, and use knowledge of how things have changed to move the clock either closer or farther away from midnight. To quote Prince’s prescient 1999 lyrics, the idea is that when the clock strikes 12, it’s party over, oops, out of time.

In 2023, the update occurred on Tuesday, Jan. 24, marking the first time we’ve heard from the Bulletin team since the Russian invasion of Ukraine, which pushed the clock closer to midnight.

“Today, the members of the Science and Security Board move the hands of the Doomsday Clock forward, largely, though not exclusively, because of the mounting dangers in the war in Ukraine,” the team said.

Why is it adjusted?

The scientist consider a variety of factors each year, including the threat of nuclear war, the climate crisis, genetic engineering and other things marked as threats to civilization.

What’s the closest the Doomsday Clock has been to doomsday?

This is it. The clock has never been closer. The most recent statement about its position notes that while there were some positive changes in 2022, it wasn’t enough to reverse the negative trends, including climate change, Russia-US-China tensions, COVID-19 and more.

Before 2020, the closest the Doomsday Clock was to midnight was when it was set at two minutes to midnight. That happened twice — once in 2018 due to nuclear risk and climate change dangers, and once in 1953 due to thermonuclear weapons tests by the US and USSR.

What’s the farthest the Doomsday Clock has been from doomsday?

In 1991, as the Cold War ended and the US and USSR signed the Strategic Arms Reduction Treaty, the Doomsday Clock sat at a  relatively safe-feeling 17 minutes from midnight.

Is there a real, physical clock?

Yep, and you can visit it. The Doomsday Clock is located in the lobby of the Bulletin offices at the University of Chicago (1307 E. 60th St.), in the lobby.

Pop culture and a new book

The clock has settled into pop culture, with such bands as The Who, The Clash and Smashing Pumpkins writing songs about it. It’s also appeared in novels, comic books, movies and TV shows.

If you’re interested in the history of the worrisome clock, and why it’s been adjusted at various historic events, a coffee table book marking the clock’s 75th anniversary was published in 2022. The Doomsday Clock at 75 delves into the clock’s history and how it has impacted culture and policy.