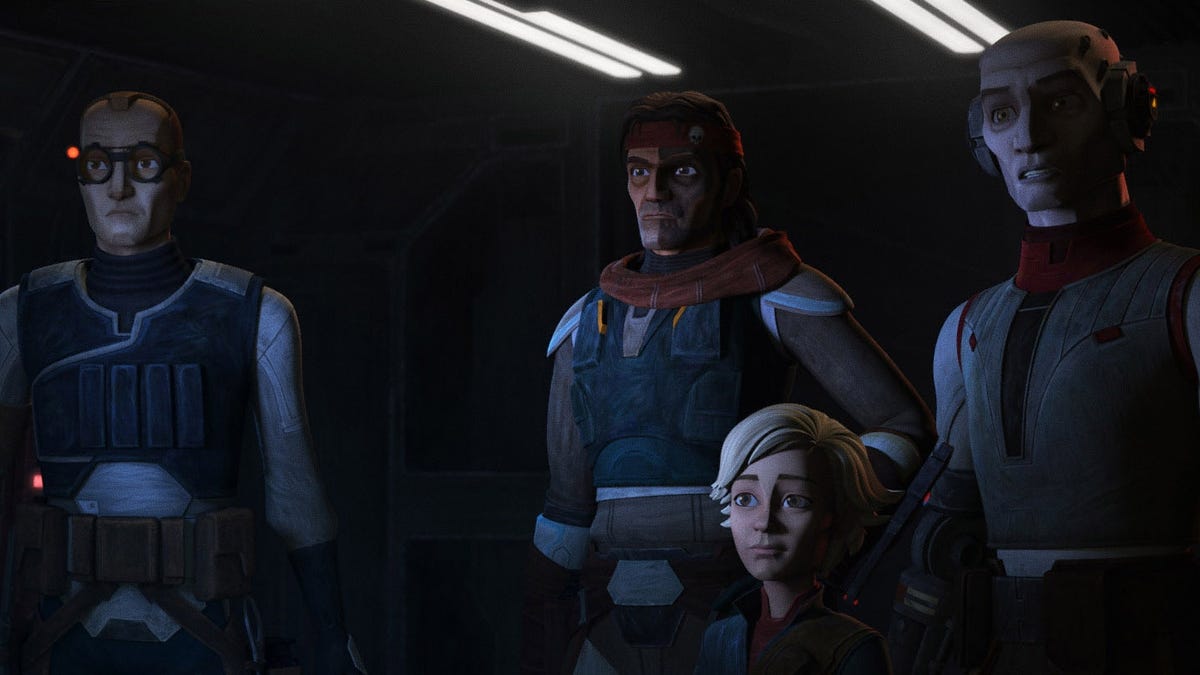 The Bad Batch’s Tech, Hunter, Omega and Echo uncover some of the Empire’s machinations in season 2.
Lucasfilm

The Bad Batch is almost back. Season 2 of the Star Wars animated series begins on Wednesday, as the first two episodes land on Disney Plus. Members of the genetically enhanced titular clone squad, introduced in The Clone Wars‘ final season, are operating as mercenaries after fleeing the Empire in the period between Revenge of the Sith and A New Hope.

Along with younger clone Omega, they’re trying to avoid former comrade Crosshair after the cold-hearted clone stuck with the totalitarian regime. However, Crosshair’s loyalty seemed to waver after the merciless Empire bombarded the clone homeworld of Kamino in the season 1 finale.

Head writer Jennifer Corbett and supervising director Brad Rau are back for season 2, along with actor Michelle Ang as Omega. Dee Bradley Baker returns as Crosshair, the Bad Batch (yes, all of them) and countless other clone troopers — some of which he’s played since 2008.

I got to see 14 of season 2’s 16 episodes and talk with Corbett, Rau, Ang and Baker over Zoom ahead of the season 2 premiere. We touched on how the clones are treated in this era, Crosshair’s intense arc and how seeing more of the galaxy is shifting Omega’s perspective. 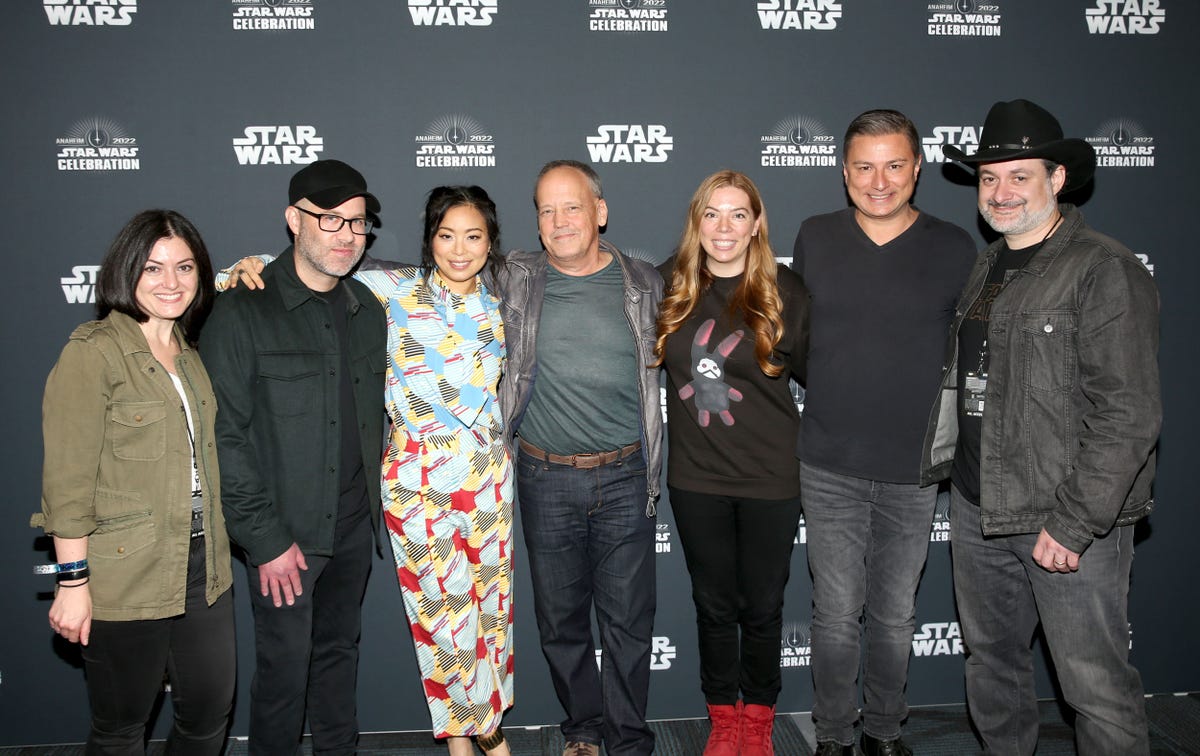 Here’s a transcript of our conversations, edited together for clarity.

Q. The mythology of the clone troopers is one of Star Wars’ most fascinating elements. How does season 2 expand on it?

Jennifer Corbett: We ended season 1 with the destruction of the clones’ home, Tipoca City on Kamino. That shows how the Empire feels about the further production of clones and clones in general, which we explored a lot in season 1.

Season 2 delves into how the Empire views the clones as just property and a resource that is losing its luster, and how they want to further improve and expand the might of their military. This is something that the Batch reacts to, along with others we meet throughout season 2. This show is very much meant to be a story about the clones, and we’re continuing with that.

Brad Rau: The way the Empire treats the clones as used equipment is something that we get into — that has a direct effect on the trajectory of the show.

Michelle Ang: It’s a real privilege to be part of this since I’m quite new to Star Wars. As someone sort of experiencing it as I received the scripts, clearly there’s a sea change.

There’s an episode at the senate where they’re talking about the Imperial recruitment bill and phasing out clones. It highlights the interesting idea of clones having an identity and a voice politically, but only spoken about as a resource that the powers that be can choose to manipulate or essentially cut off.

From Omega’s perspective, that’s so unjust, and wanting to advocate for being seen as the human beings they are. She gets a sense that the troopers are just a pawn in the much larger political scale, and that the change that the Empire is trying to push through is going to be big.

Dee, Crosshair’s arc in season 2 blew my mind. Given his icy demeanor, should I be concerned that his voice is the one that stuck in my head after watching?

Dee Bradley Baker: No, Crosshair is the one that stayed with me. I was really surprised. It’s weird as a voice actor —  you perform through the scene as you imagine it, but it’s later edited. And maybe you make some changes in postproduction. But I don’t see the animation and the collaborative process of creating the final story.

Crosshair goes on an intense ride in the second season.

So when I see it, it feels fresh and the Crosshair stuff could be my new favorite Bad Batch arc because of what he has to endure … his journey is really compelling and heartbreaking. I think fans are going to go nuts for it.

Omega hangs out with a nice variety of mentor figures in season 2. Can you talk about how they affect her?

Rau: All of her dads in the Bad Batch affect her greatly. We wanted to show her learning new things and training, even if it feels like like homework — bummer, homework — that ends up helping out in a mission or dangerous situation.

One of our new favorite characters is Phee Genoa, played by Wanda Sykes — she’s such a fun addition. There are a couple of instances where you see how Phee rubs off on Omega. It’s always great when we could have the camera on Hunter, who’s not sure he likes the way this kid’s attitude is going. We wanted to play the reality of that even though it’s an animated show, we wanted to really get into the mindset of these characters.

Omega is exposed to new influences as she discovers her place in the galaxy.

Ang: When we first met Omega in season 1, she’s never left Kamino. Doing so showed her the wonders of the universe. When we pick up with her in season 2, she’s very much attuned to this life of mercenary and bounty hunter. But her journey is about figuring out what really matters, what are the truly important things in life.

In Phee, she sees an example of a pirate that’s super successful, answers to no one and has a cavalier life that suits her.

And it’s not meeting mentor figures. Omega’s encounters with children are important because she’s never really experienced childhood. Being able to meet other youngsters shows her that other children have this more innocent existence. It causes Omega and her brothers to evaluate whether they’re doing the right thing by bringing her on this mercenaries’ journey.

It feels like the clones might be a comment on an indifferent authority as power is consolidated, compassion gives way to selfishness, and soldiers are increasingly viewed as tools to be discarded. Would you agree with that?

Corbett: I think it goes into how the Republic treated the clone troopers in the Clone Wars. They were given clone numbers, but often they were encouraged to have individuality — like Rex, Cody and Echo all had names. The Jedi accepted that and even encouraged it, whereas the Empire is the complete opposite. They’re not allowed to have variations or any color in their uniform, and it’s back to being your CT [clone trooper] number or your CC [clone commando] number. And that’s how they treat their military.

For the Bad Batch, who didn’t fit in really anywhere, I think they’re a little more distant with it. It’s different for Echo, who is a reg [he isn’t genetically enhanced, he was turned into a cyborg] and feels a bit more connected to what’s happening with the clones. And that definitely is highlighted a lot in season 2.

The clones are just a cog in Emperor Palpatine’s plans.

Baker: When an authoritarian or an autocracy takes power and consolidates the narrative, it attempts to wipe out history, and to rewrite it. Everyone is a cog — a tool to help Palpatine consolidate his power. If you’re a cog and serving that, then you may have a little place in the larger scheme, but that’s it. If not, it’s fine to eliminate you and he’ll send everything after you.

That’s part of what was brilliant about [Star Wars creator] George Lucas, where he started with the basic idea of fighting back against tyranny in the original trilogy. Then going back [with the prequels and The Clone Wars], he shows how democracy grows old, corrupt and falls apart, then how autocracy grows out of that.

To use that as a backdrop for these personal stories is a very bold, creative and ambitious palette to paint from. It’s playing out so beautifully with all these different stories [like The Bad Batch, Andor and Obi-Wan Kenobi] that each have their own identity and their own tone, but they all fit together.