She apologized for verbally abusing an Olympic judge, but questions over the conduct of China’s ‘Iron Lady’ of diving remain 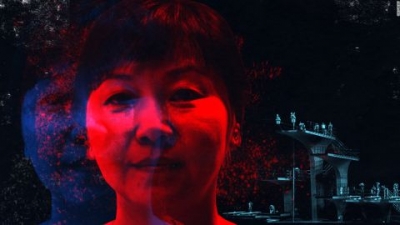 For Lisa Wright, an elite-level diving judge from New Zealand, it was supposed to be the highlight of her career – the chance to adjudicate at the sport’s premier event at the Olympics.

But the scenes that unfolded after the men’s 10-meter platform final in Tokyo last year “darkened” her Olympic experience for some time, Wright says.

They also led to an official complaint being lodged by Diving New Zealand and Wright against Zhou Jihong – a vice-president of water sports governing body FINA and one of the most influential figures in diving – on the grounds of harassment and abuse.

That was after Zhou, who has been dubbed the “Iron Lady” of Chinese diving, allegedly launched a verbal tirade at Wright at the 10m platform event’s conclusion for underscoring Chinese divers.

“She was on poolside screaming at me and yelling at me – it was definitely one of the most humiliating experiences of my life,” Wright tells CNN Sport.

Zhou was later ordered by a FINA Ethics Panel to write a letter of apology to Wright.

However, some members of the diving community view Zhou’s actions at the Olympics as a flashpoint amid a wider pattern of conduct they believe is harmful to the sport.

One of those who holds that belief is New Zealander Simon Latimer, a former diver and judge and now a member of FINA’s Diving Technical Committee (TDC). 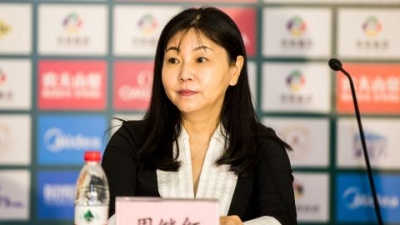 Zhou attends a press conference ahead of the Diving World Series event in Beijing in 2019.

Following the incident at the Olympics, Latimer sent a whistleblower complaint to FINA’s executive director Brent Nowicki in December detailing Zhou’s alleged “unethical behavior” which he says stretches back several years and “compromises the integrity of both diving and FINA.”

This contains allegations that Zhou has routinely coached Chinese divers during major events – including the Tokyo Olympics – and has manipulated judging panels in order to benefit Chinese athletes.

Zhou has not spoken publicly about these allegations. CNN has contacted the General Administration of Sport of China and the Chinese Swimming Association for a response from Zhou but has not received a response.

Latimer’s complaint also focused on the events after the men’s 10m platform final last year, an incident he says he witnessed and describes as a “personal outburst” from Zhou towards Wright.

“Part of making this complaint is to ensure that an incident like that … never happens again,” Latimer tells CNN Sport. “There’s a lot of things to consider around athlete welfare, but we also need to consider the welfare of officials.”

Wright then approached Zhou to offer her congratulations on China’s success, but says she was met with a barrage of verbal abuse and the allegation that she hadn’t judged to an appropriate standard and had underscored Chinese athletes.

“I just said I’m sorry you feel that way and I left and ended up crying in the bathroom, which was definitely not how you want to end your premier event of the Olympics,” says Wright.

“It was pretty traumatic for me, to be honest, especially given the fact that everyone knows that she’s the vice president of FINA.”

Of some consolation for Wright was the support she received from other diving officials, who she says agreed with how she had scored athletes in the competition.

Moreover, the event’s independent assessor – responsible for monitoring the scores given by the judging panel – had agreed with her scoring on two occasions in which she gave a Chinese diver lower scores compared to her peers.

In a diving event, judges on the panel award each dive a score ranging from zero to 10. Every FINA event has an assessor who watches replays of the dives, checks for bias in the judging, and evaluates the scores the judges are awarding. 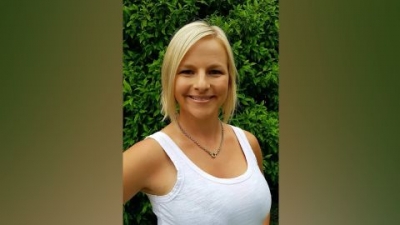 ‘What am I in this sport for?’

Wright says she had no interest in making a “personal complaint” or “retaliation” against Zhou, but was also aware of what might happen if no investigation was launched by diving’s authorities.

She believes Zhou would have the power and influence to exclude her from judging panels.

“In the end, I think my biggest question was: what am I in this sport for and what am I here for?” Wright says.

“I felt that it was important that we do the best thing for the sport of diving, that it remains fair, because that’s what I’m here for as a judge: that I rank those divers in the order that they should be ranked.”

In November, the FINA Ethics Panel ordered Zhou to formally apologize to Wright and Diving New Zealand for the incident.

Wright says she received the letter of apology, “appreciated” it, but “didn’t feel like it was something personal” given Zhou had been instructed to send it.

The panel also ruled that only members of the TDC should be allowed on pool deck during competitions and that Zhou’s Bureau Liaison position – traditionally tasked with taking the views of the TDC back to the FINA bureau – creates “confusion, conflict and discord” and “should be removed.” 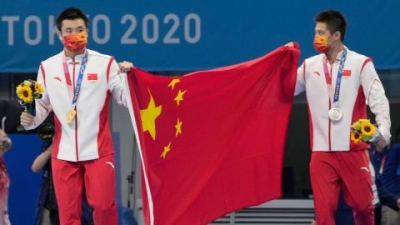 China’s Cao Yuan (left) and Yang Jian celebrate their medals in the men’s 10m platform final at the Tokyo Olympics.

In his whistleblower complaint, which has been shared with CNN Sport, Latimer alleges that Zhou has provided coaching to Chinese athletes at international diving events – including the FINA World Championships and the Diving World Series, as well as the Olympics – despite her roles requiring neutrality.

“It’s absolutely unethical … if you are up coaching divers from your own nation, I don’t see how you could be viewed as a neutral party,” says Latimer.

“I also can’t think of any other sport where you would have a vice president on pool deck coaching and having such an open interest in the proceedings.”

Since the Olympics, video footage has emerged reportedly showing Zhou coaching Chinese divers at the Games, while another TDC member, Colleen Huffman, says she has witnessed Zhou coaching at other international events.

“A lot of times she’s very subtle about it, but obviously at the Olympics she wasn’t subtle at all,” Huffman tells CNN Sport.

“For her to have her position and be a coach is a huge conflict of interest. It’s one thing if she helps out at home with the national team, but it’s another thing if she’s actively coaching an athlete at a major FINA event when she’s the Bureau Liaison.”

In a statement sent to CNN Sport, TDC member Dominique Philippopoulos said she has twice requested to coach divers from her native South Africa at international events, but on both occasions had her requests denied by FINA officials on the grounds it was a conflict of interest.

That’s despite coming from a country where the sport of diving is small and the obstacles are many.

According to Philippopoulos, the South African diving federation has limited resources and struggles to finance overseas trips and to cover the cost of coaches.

A third allegation made by Latimer in his whistleblower complaint is that Zhou has deliberately manipulated judging panels in an apparent attempt to benefit Chinese divers.

“Two judges have confidentially advised me that they believe they are regularly disregarded to judge finals as punishment for not judging Chinese divers as favourably as Zhou Jihong would like,” he wrote.

“One judge informed me that Zhou Jihong approached them at a World Cup Event in 2018 and asked ‘why do you not like China?’” 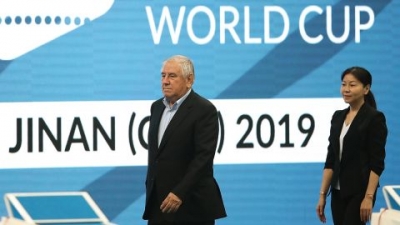 According to Latimer, Zhou has “substantial input” when it comes to deciding which judges are chosen to officiate at competitions.

He cites his own experience as a judge at the 2016 Rio Olympics, ahead of which he says he had been awarded the highest cumulative evaluation score from assessors among international judges through 2015-2016.

But he alleges in his whistleblower complaint that he “fell out of favor” as a judge during the Olympics and was only reinstated for the men’s platform final when members of the TDC Commission “convinced Zhou Jihong” to reappoint him.

“What concerns me and some others is that judges appointed to finals aren’t always the ones that appear to be assessed most highly,” says Latimer.

“There’s certainly a discrepancy in some judges with very high evaluations getting very few appointments.”

Since making his whistleblower complaint, Latimer says he has received a response from FINA saying the governing body won’t look into the issues he raised as they were already considered during the previous complaint submitted by Wright and Diving New Zealand.

However, allegations about Zhou manipulating judging panels and coaching during events were not directly mentioned in the Ethics Panel’s response to that initial complaint.

These issues, Latimer says, are being “swept under the carpet” by FINA.

In a statement sent to CNN, FINA said: “The reports regarding Ms Jihong Zhou were fully investigated by an independent panel that heard from witnesses and reached a decision which is publicly available on the FINA website.

“The independent panel concluded that there was no evidence to suggest that competition results were impacted in any way and to our knowledge, no further formal allegations have been made beyond what has been previously decided by the independent panel.

“At all times, FINA’s primary concern is the welfare of the aquatics community and ensuring the integrity of our competitions.”

Latimer calls the incident between Zhou and Wright at the Olympics a “watershed moment” for him – the moment he decided to support the New Zealand federation’s complaint and then subsequently speak publicly about Zhou’s behavior and his concerns for the integrity of the sport.

“I’m well aware that through this whistleblower process, I could lose my position on the Technical Committee,” he says.

“We have elections in two months’ time in Budapest [at the World Championships, which start on June 17]. But for me, seeing this complaint through and getting some action is more important than maintaining my position on the committee, although I would obviously like to stay on the committee and be part of the process to ensure this sort of behavior doesn’t continue.” 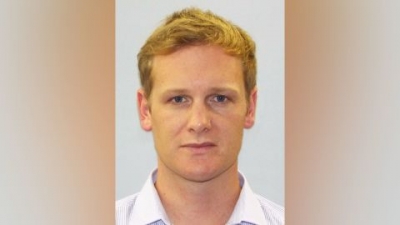 Latimer was appointed to FINA’s Diving Technical Committee in 2017.

Allegations against Zhou, Latimer says, have been slow to emerge due to her influential status within the sport.

The “Iron Lady” of Chinese diving, Zhou became the country’s first ever Olympic gold medalist in the sport in 1984.

She went on to spearhead China’s dominance in diving, coaching the national team from 1990 to 1997. Today, as well as being a FINA vice president, she is also the chair of the Chinese Swimming Association.

“People are scared stiff, they’re petrified of rocking the boat and losing their position,” Latimer says.

Huffman, meanwhile, says she fears for the future of the sport and the potential difficulty of attracting new judges given Zhou’s alleged behavior.

“People won’t want to judge. They just won’t,” she adds.

“We’re already struggling to get judges, particularly out of the South America region. All the judges from that area are aging out and the new people coming in, they hear bad things about her, how mean she is, how intimidating she is. Who wants to go experience that?”

As for Wright, she’s looking forward to her next judging commitments with optimism, undaunted by what happened at the Olympics. She is in line to officiate at the World Championships in June and the Commonwealth Games in Birmingham, England, in July.

Zhou will likely be at the World Championships, but that doesn’t cause her too much concern.