Scientists Reveal Why Rome’s Pantheon Has Yet to Crumble 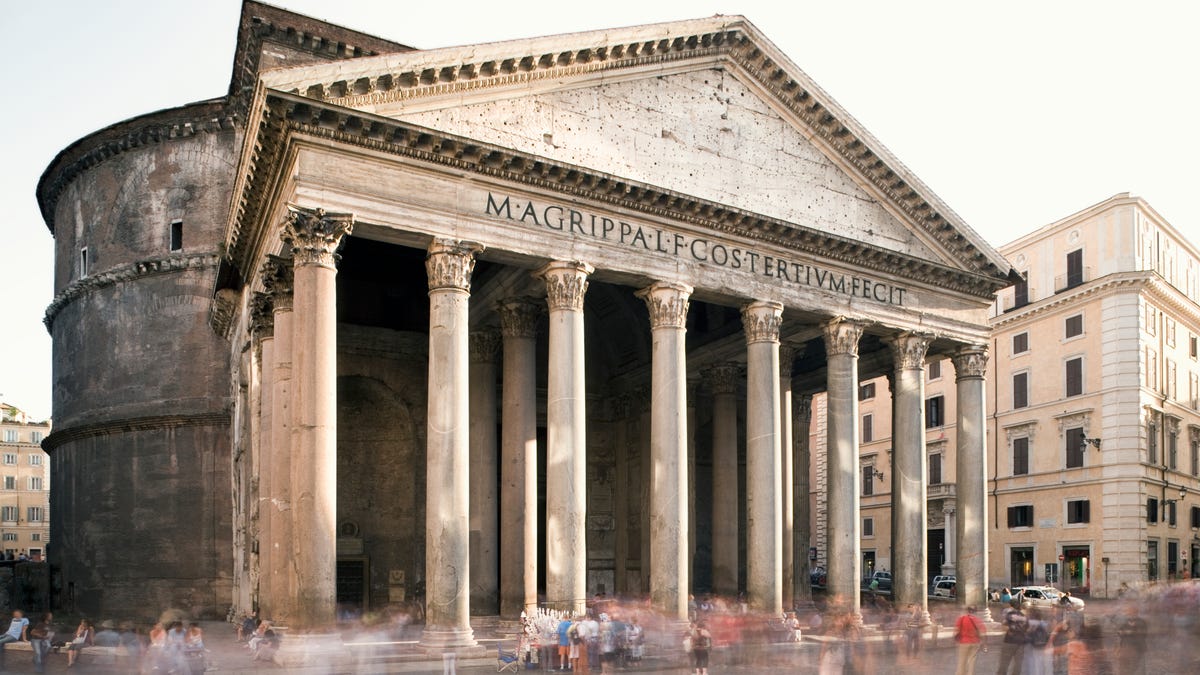 Despite being built thousands of years ago, some concrete structures across the world have surprisingly, and literally, stood the test of time. Most notably, Rome’s Pantheon was constructed around 126-128 A.D. — yet its massive, unreinforced concrete dome still majestically anchors the city. A few ancient Roman aqueducts are even still in use, steadily delivering water across the land.

So a big question naturally arises: What might be special about 2,000-year-old concrete? And how can we build superpower buildings as durable as the iconic edifices of the Roman empire? On Friday, in the journal Science Advances, engineers from the Massachusetts Institute of Technology offered a fascinating answer. In short, they believe small minerals called “lime clasts” gave old concrete a sort of healing capability.

But what’s really interesting about this is that for years, scientists had assumed the presence of lime clasts in ancient concrete mix was accidental — a product of poor mixing and inattention.

“The idea that the presence of these lime clasts was simply attributed to low quality control always bothered me,” Admir Masic, a professor of civil and environmental engineering at MIT and lead author of the study, said in a statement.

“If the Romans put so much effort into making an outstanding construction material, following all of the detailed recipes that had been optimized over the course of many centuries,” Masic continued, “why would they put so little effort into ensuring the production of a well-mixed final product? There has to be more to this story.” 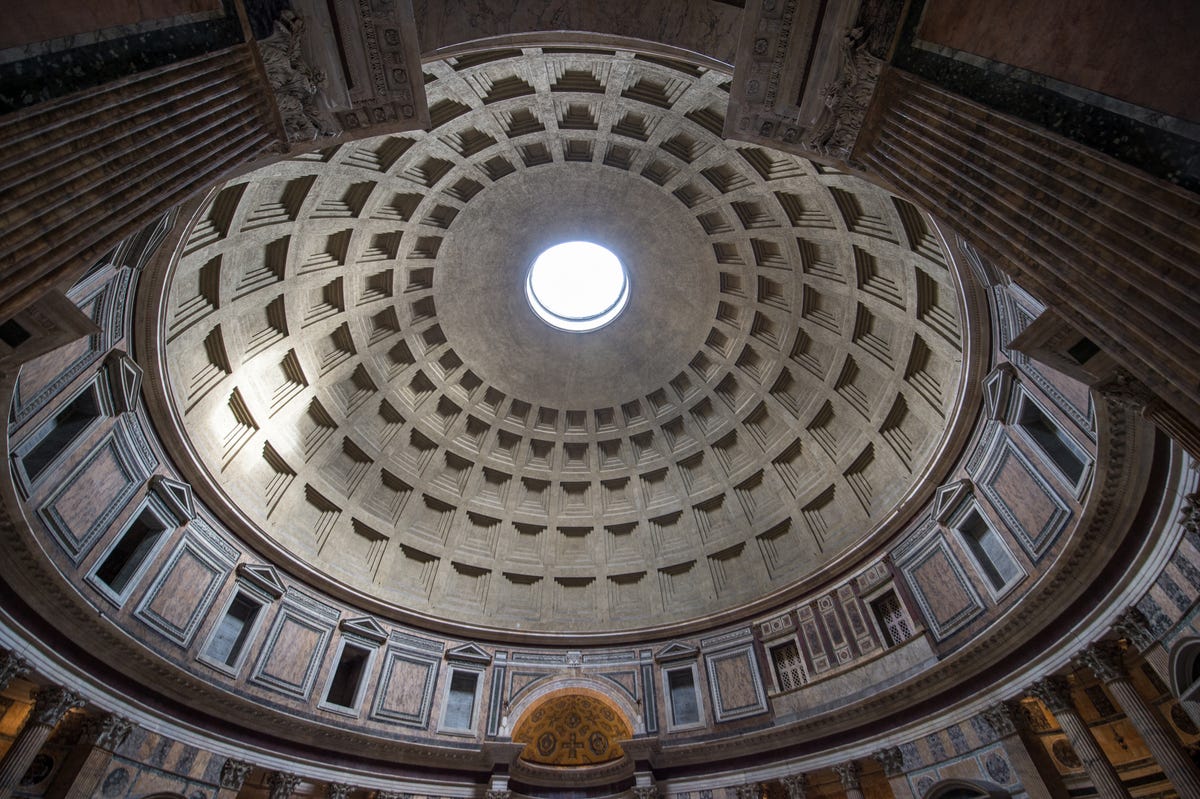 Here’s the dome inside Rome’s Pantheon. It’s made of concrete like many modern buildings, but with a special recipe.

The story starts with volcanic ash

Historically, according to Masic and fellow researchers, experts had assumed the secret ingredient in building structures like the Pantheon had to do with a substance called pozzolanic material. Oddly enough, pozzolanic material is derived from volcanic ash in the area of Pozzuoli, on the Bay of Naples.

Architects of the time were obsessed with this material, going so far as to ship it to the Roman empire for construction workers putting together crucial properties.

But after inspecting samples of ancient concrete in greater detail, Masic observed the presence of what are called lime clasts inside. What’s important to note is that lime clasts aren’t exactly easy to make. They’re not a random byproduct of other chemical processes. You have to actively create lime clasts if you want them, the team explained.

Or more specifically, you have to mix the concrete with lime at ultra-high temperatures to get a couple of lime clast garnishes.

And sure enough, with a bit more analysis, the team found proof of (extremely) hot mixing in the ancient concrete samples. Romans really did want the lime clasts in there.

Plus, “the benefits of hot mixing are twofold,” Masic said, in terms of general construction.

First, when concrete is heated to high temperatures, it produces compounds you can’t get if you only used slaked lime — which refers to non-hot-mixed lime. Second, the increased temperature significantly reduces what’s known as “curing” and setting times while building a structure. That’s because heat accelerates reactions, and accelerated reactions mean faster construction.

Here, Masic is referring to those self-healing properties I mentioned earlier. 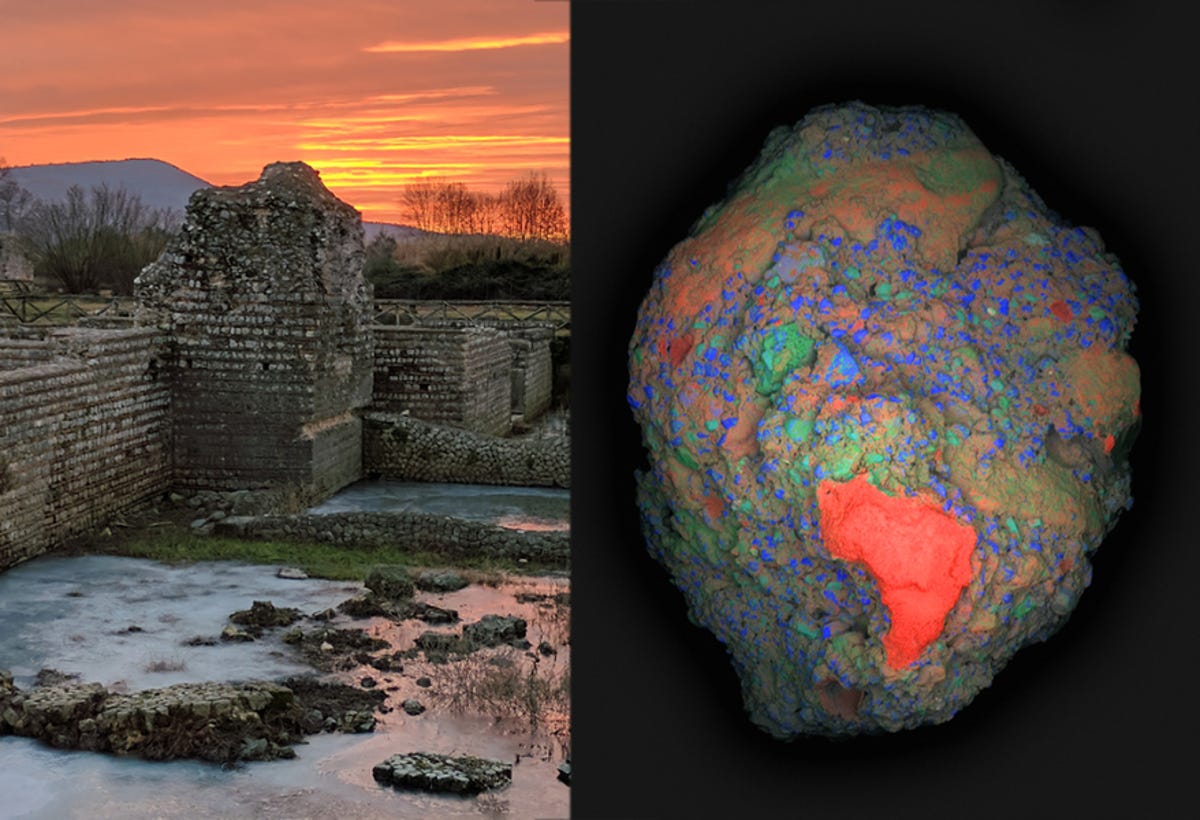 A large-area elemental map of a 2-centimeter fragment of ancient Roman concrete (right) collected from the archaeological site of Privernum, Italy (left). A calcium-rich lime clast (in red), which is responsible for the unique self-healing properties in this ancient material, is clearly visible in the lower region of the image.

Basically, during the hot mixing process, lime clasts create a special pattern in the concrete and form what’s known as a reactive calcium source. This means that if tiny cracks ever form, those cracks have a high likelihood of traveling along the little lime clast pattern. Then, if water finds its way into the cracks, a bunch of reactions happen with the calcium source and, long story short, the cracks get filled with a recrystallized version of the calcium source itself.

To confirm their hypothesis, the researchers also tested this out.

Step one was to make concrete through hot mixing, ensuring the presence of lime clasts. Step two: Create a couple of cracks. Step three: Run water through the cracks.

Lo and behold, within two weeks, they found the cracks had completely healed and the water could no longer flow. (Before you ask, nope, the modern concrete version they tested did not heal.)

Roman architecture’s mysteriously amazing material, though, probably runs far deeper than just with the inclusion of lime clasts. For instance, a separate MIT study, also conducted by Masic, from October 2021 found that a 2,050-year-old Roman tomb had a lot of that magical volcanic ash in its walls — and noticed that there were “unusual chemical interactions with rain and groundwater that [accumulated] over two millennia” because of this ash.

These interactions apparently helped with cohesion of the concrete. However, that study correlated the findings with a potassium derivative rather than lime clasts in particular.

“Understanding the formation and processes of ancient materials can inform researchers of new ways to create durable, sustainable building materials for the future,” Masic said in a press release about the 2021 study. “The tomb of Caecilia Metella is one of the oldest structures still standing, offering insights that can inspire modern construction.”

As for now, the team is working on commercializing the self-healing concrete concoction they just made.