Peru’s Congress on Wednesday voted to remove President Pedro Castillo after he attempted to dissolve the legislative body following their third attempt to remove him from office.

Lawmakers voted 101-6 with 10 abstentions to remove Castillo from office for reasons of “permanent moral incapacity.” 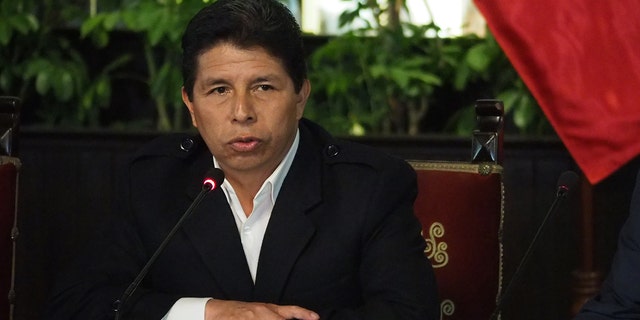 Pedro Castillo was removed as Peru’s president after a congressional vote on Dec. 7, 2022.
(Carlos Garcia Granthon/Fotoholica Press/LightRocket via Getty Images)

Vice President Dina Boluarte was quickly sworn in to replace Castillo. The 60-year-old lawyer took the oath of office and became the first female leader in Peru’s history.

Her swearing-in capped hours of uncertainty as both the president and Congress appeared to exercise their constitutional powers to do away with each other. She said her first order of business would be to address government corruption.

“There has been an attempted coup … that has not found an echo in the institutions, nor in the street,” Boluarte said. She called for a political truce to install a national unity government.

Castillo left the presidential palace in an automobile that carried him through downtown Lima and later entered a police station, where his status was not immediately clear. 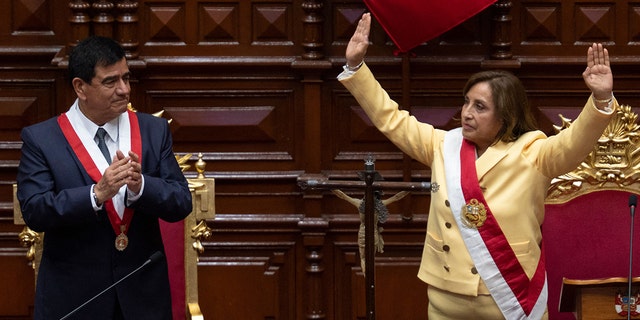 Peruvian Dina Boluarte, right, greets members of the Congress after being sworn in as the new president hours after former President Pedro Castillo was impeached in Lima, on Dec. 7, 2022.
(CRIS BOURONCLE/AFP via Getty Images)

Shortly before the vote, Castillo announced that he was installing a new emergency government and called for the next round of lawmakers to develop a new constitution. He said during a televised address that he would rule by decree meanwhile, and ordered a nightly curfew starting Wednesday night.

Castillo also announced that he would change the leadership of the judiciary, police, and constitutional court. The head of Peru’s army then resigned, along with four ministers, including those over foreign affairs and the economy.

Castillo took action as his opponents in Congress moved toward a third attempt to remove him from office.

The congressional vote called for Boluarte to assume the presidency. Boluarte rejected Castillo’s actions, saying “it worsens the political and institutional crisis that Peruvian society will have to overcome with strict adherence to the law.”

Peru’s Joint Chiefs and National Police rejected the constitutionality of Castillo’s dissolution of the Congress in a statement.

Since 2016, Perú has been entrenched in political crises, with congresses and presidents trying to eliminate each other in turn.