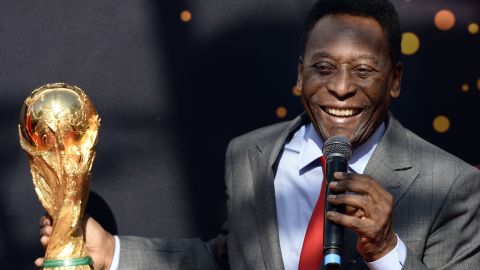 Here is a look at the life of Edson Arantes do Nascimento, known as Pelé, a professional Brazilian football (soccer) player.

Started playing football professionally at 15. His position was inside left forward (striker), his jersey number was 10, and he played for Santos Football Club from 1956-1974.

Brazil’s president declared Pelé a national treasure, preventing him from signing on with a team outside of Brazil.

He was named after Thomas Edison.

Wrote multiple memoirs, including “Pelé: My Life and the Beautiful Game,” “My Life in Pictures” and “Pelé: The Autobiography.”

He composed the soundtrack for the film “Pelé (1977),” as well as other musical pieces.

Pelé Day occurs in Santos, Brazil, on November 19 each year, to recognize the date of his 1,000th goal.

Has been a spokesman for Viagra.

September 7, 1956 – Scores his first professional goal in his league debut, during a match between Santos FC and Corinthians Football Club.

1967 – The two sides involved in the Nigerian civil war call a cease-fire to watch Pelé and the Santos team play an exhibition game in Lagos.

1993 – Is inducted into the US National Soccer Hall of Fame.

1998 – A law passes, nicknamed the “Pelé Law,” to address corruption in Brazilian football. It goes into effect in 2001.

1999 – The International Olympic Committee names him “Athlete of the Century.”

2005 – Receives a lifetime achievement award at the BBC Sports Personality of the Year show.

November 2012 – Undergoes a successful hip operation at a hospital in Sao Paulo.

November 24, 2014 – Is admitted to a Brazilian hospital with a urinary tract infection. On November 29, the hospital issues two statements saying that Pelé continues to improve and that doctors plan to take him off dialysis the next day.

May 7, 2015 – Is hospitalized to undergo prostate surgery. He is released after two days.

August 5, 2016 – It is announced that he will not light the Olympic cauldron in the opening ceremony of the 2016 summer games due to health problems.

September 13, 2018 – Launches The Pelé Foundation, a charity that will team with other organizations to benefit children, specifically in the areas of poverty and education.

April 3, 2019 – Is taken to a hospital in Paris because of a urinary tract infection.

April 9, 2019 – Returns to Brazil and is admitted to the Albert Einstein Hospital in Sao Paolo for a urinary tract infection caused by kidney stones. Four days later, he has surgery. He leaves the hospital two days after surgery.

September 6, 2021 – Pelé announces on social media that he underwent surgery to remove a tumor from his right colon on September 4.

September 30, 2021 – Is discharged from hospital following surgery to remove a tumor from his colon.

December 8, 2021 – According to a spokesperson at Sao Paulo’s Albert Einstein hospital, Pelé is hospitalized for chemotherapy treatment of a colon tumor. On December 23, Pelé tweets that he has left the hospital.

January 19, 2022 – Pelé returns to the hospital to receive cancer treatment and is discharged on January 20.

April 18, 2022 – According to a spokesperson at Sao Paulo’s Albert Einstein hospital, Pelé has returned to the hospital to receive cancer treatment. On April 21, the hospital reports Pelé has left the hospital in stable condition.

December 2, 2022 – The Albert Einstein Jewish Hospital in São Paulo releases a statement saying Pelé is being treated for a “respiratory infection.”