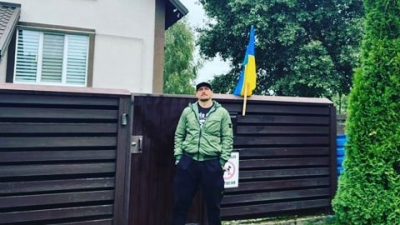 Oleksandr Usyk posted pictures of his house on social media along with a location tag for Vorzel, near Bucha.

Oleksandr Usyk has shared photos of himself at his family home in Ukraine – the first time the boxing world champion has explicitly posted from Vorzel, near Bucha, since the house was taken by Russian forces earlier this year.

Usyk posted photos of himself in front of the house on his verified Instagram account’s story along with a location tag for Vorzel on Tuesday. 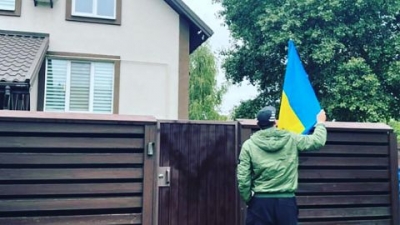 Usyk posted the photos of his house in an Instagram story. 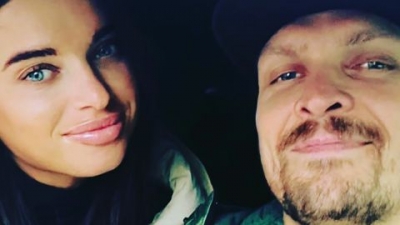 One of Usyk’s photos in his Instagram story was with his wife Yekaterina. 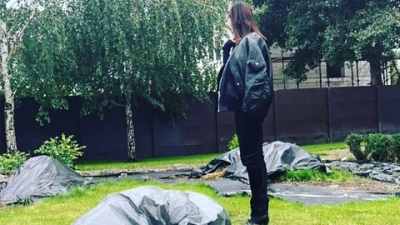 Yekaterina was also pictured in the backyard of their Vorzel home.

The photos show Usyk, 35, standing near a Ukrainian flag outside the fence of the house.

In April, Ukrainian news outlet ICTV tweeted images from Usyk’s wife Yekaterina’s Instagram story which showed the house being destroyed and burned, along with a caption reading, “Russian world! It came to me too! Beasts! They just ruined everything, they were sh*tting as usual!”

Oleksandr Usyk of Ukraine celebrates after his unanimous decision victory over Anthony Joshua of Britain in their WBA (Super), WBO and IBF boxing title bout at the Tottenham Hotspur Stadium in London, Saturday, Sept. 25, 2021. Former heavyweight champions Vitali and Wladimir Klitschko are leading some of the resistance from the mayor’s office in beleaguered Kyiv. Two-time Olympic champion Vasiliy Lomachenko has an assault rifle and a place in a defense force, and current heavyweight champion Aleksandr Usyk rushed back home to take up arms against the Russians. Ukraine’s rich boxing community is determined to fight, this time with guns instead of their fists. (AP Photo/Frank Augstein, File)

'It's my duty': World heavyweight boxing champ returns to Ukraine to fight

In an interview with British newspaper the Guardian in August, Usyk said that his house had been broken into by Russian soldiers, but that he had “people rebuilding it, so everything is going to be okay.”

Usyk defeated British boxer Anthony Joshua for the second time on August 20 in Saudi Arabia to retain his WBA (Super), IBF, WBO, and IBO heavyweight titles. and returned home to Ukraine on August 29, according to an Instagram post.

When Russia invaded Ukraine on February 24, Usyk traveled to Ukraine and joined the territorial defense battalion.

In March, the Ukrainian sports minister said Usyk would be granted permission to return to training in the lead up to his fight with Joshua, but still the 35-year-old was reluctant.

“They were asking me to go, to fight, to fight for the country, fight for your pride and if you’re going to go there, you’re even going to help more for our country.

“I know a lot of my close people, friends, close friends, are right now in the front line and fighting. What I’m doing right now, I’m just supporting them, and with this fight, I wanted to bring them some kind of joy in between what they do.”

Combined with a parallel offensive in the south, Ukraine has taken back a total of 6,000 square kilometers (about 2,300 square miles) of land in in the northeast, President Volodymyr Zelensky said Monday.

The Ukrainians have gained a huge weaponry haul from these battles in the northeast, as many Russian troops sacrificed their vehicles intact in order to escape with their lives.