Jane Fonda says her ‘knees gave way’ when she met ‘gorgeous’ Tom Brady: ‘I had to hold onto something’

Jane Fonda gushed over meeting NFL legend Tom Brady on the set of their upcoming movie “80 For Brady.”

The 85-year-old actress starred alongside Lily Tomlin, Sally Field and Rita Moreno in the sports comedy which was produced by Brady’s 199 Productions and features a cameo appearance by the 7-time Super Bowl Champion.

“Tom Brady, I think he went into all of our trailers individually,” she recalled during a Q & A, according to Variety. “And when he walked into my trailer at the end, my knees gave way.” 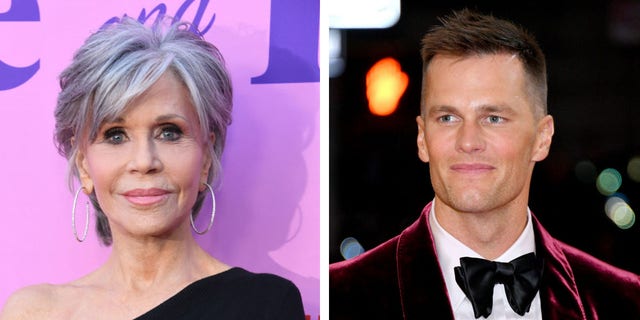 Jane Fonda revealed that she was starstruck when she met Tom Brady.
(Getty)

The “Book Club” star continued, “I had to hold onto something. I mean, he is gorgeous. He is so gorgeous.”

The “Book Club” star continued, “I had to hold onto something. I mean, he is gorgeous. He is so gorgeous.”

In the movie, Fonda, Moreno, Field and Tomlin play four best friends and Brady superfans who travel together to Houston, Texas to see the New England Patriots take on the Atlanta Falcons in the 2017 Super Bowl.

During the screening, Field told the audience that she was waiting to meet the star athletes before they arrived.

“I was the one out there welcoming everybody,” the 76-year-old actress remembered. 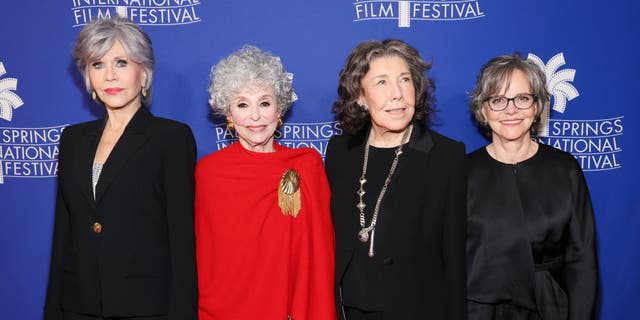 She added, “I wanted them to feel comfortable. I was a fan and I was out there welcoming them.”

Fonda went on to praise Brady for his good manners, recalling, “Tom was so gracious when he first came on the set to buy lunch.”

The two-time Academy Award winner continued, “It was the first time he went to each of our trailers, which were our dressing rooms, and he introduced himself as though we didn’t know who he was.”

“But again, a true gentleman. He was gracious. And I had one of those huge football sweatshirts waiting for him because my nephew is an enormous fan, and he was so gracious. And [Tom] wrote on it for him, and my nephew now has that on the wall in a frame. [Tom] just has very good manners like that.”

Fonda also raved about the Tampa Bay Buccaneers quarterback on the red carpet ahead of the premiere. “”He was kind and humble, which is hard to believe considering how brilliant he is at what he does, but it’s true. He was also sweet and polite,” she told the Hollywood Reporter.

The New York native added, “My knees actually got weak when he walked into my trailer. I’m in awe of that kind of skill. When somebody is the best in the world at what they do, you have to honor that and respect it. I was just awestruck.”

During her interview with THR, Tomlin complimented Brady on his acting skills. “He’s a good actor,” she told the outlet. “He’s very personable and unassuming.”

She went on to describe Brady’s performance during a long scene that they share together in the film.

The “Grace & Frankie” alum said, “Just looking at his face and his eyes and watching him listen to me as an actor trying to reciprocate in the same way. I felt like I was that [real-life] woman from Boston who was in her 80s. I felt, in fact, as though he was my son when I had to do this speech with him.” 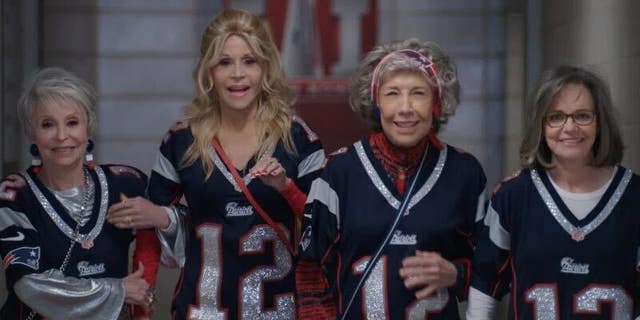 Based on a true story, "80 For Brady" follows four friends who set their sights on seeing Brady play in the Super Bowl against the Atlanta Falcons.
(Paramount Pictures Corporation)

“He’s clearly a performer,” Field told THR. “He knows where to put any kind of adrenaline he might have and knows how to ride it over the top. He’s a jaw-dropping, once-in-a-lifetime athlete and that’s really hard to be around.

“Just the fact that I was there, I mean, I’ve been a fan and watched him play — who hasn’t? He’s really staggering, not only for his physical skills but for his mental skills. He’s a chess player out there [on the field].”

Last summer, Brady told THR that he was very impressed while watching the veteran actresses perform on set.

“We found the most amazing actresses,” the first-time producer said. “Lily, Jane, Rita and Sally. They brought it all to life. At the end of the day, watching them act and watching them perform was so cool.”

“80 For Brady” will be released in theaters on February 3.