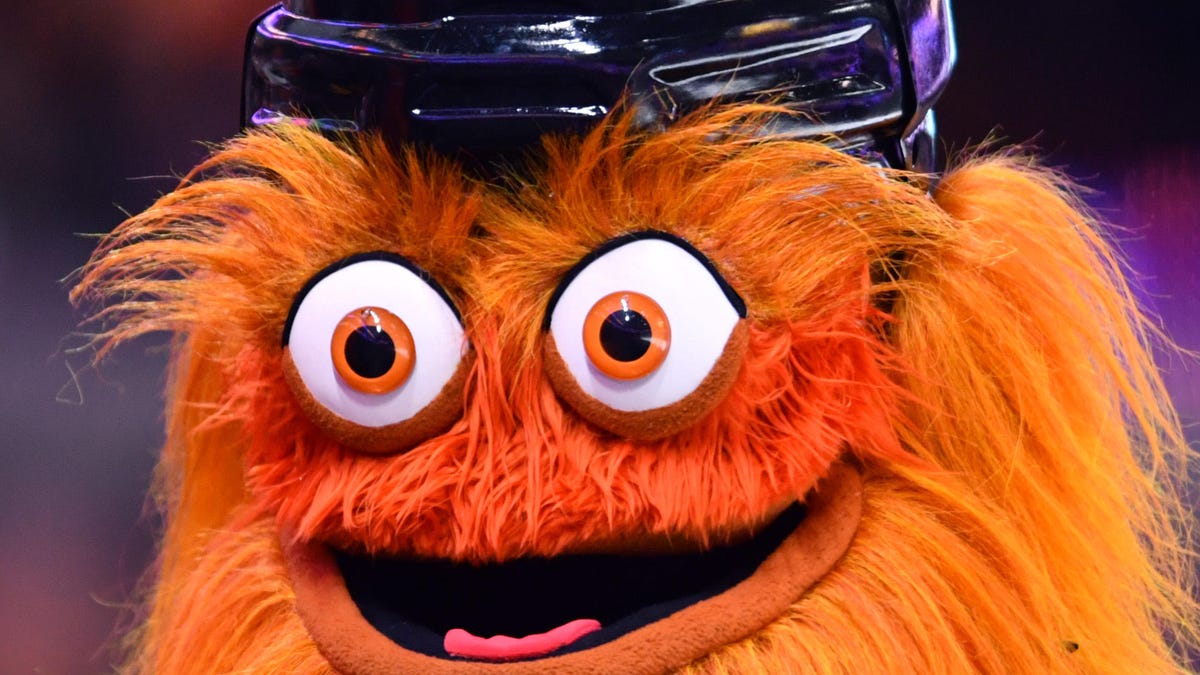 The world is an unmitigated mess, and every day we inch closer to oblivion.

Silicon Valley is a broken automaton of data mining, privacy breaches and subscription Christmas trees. The public political square is swarming with bots. The planet is cooking while we gleefully baste it with carbon emissions and single-use plastics, marvelling at our skill with the quiet satisfaction Uncle Chuck gets while broiling his famous ribs. And all your photos, memories and deepest thoughts? They’re in the coffers of Facebook, presided over by noted quinquagenary billionaire Mark Zuckerberg.

The world is broken — the tech world in particular — and we’re all on a one-way track to the heat death of the universe. But I finally have someone who understands. A gyrating nightmare monster who looks at the world with the same wild-eyed gaze, laughing maniacally into the abyss of humanity’s inevitable downfall. 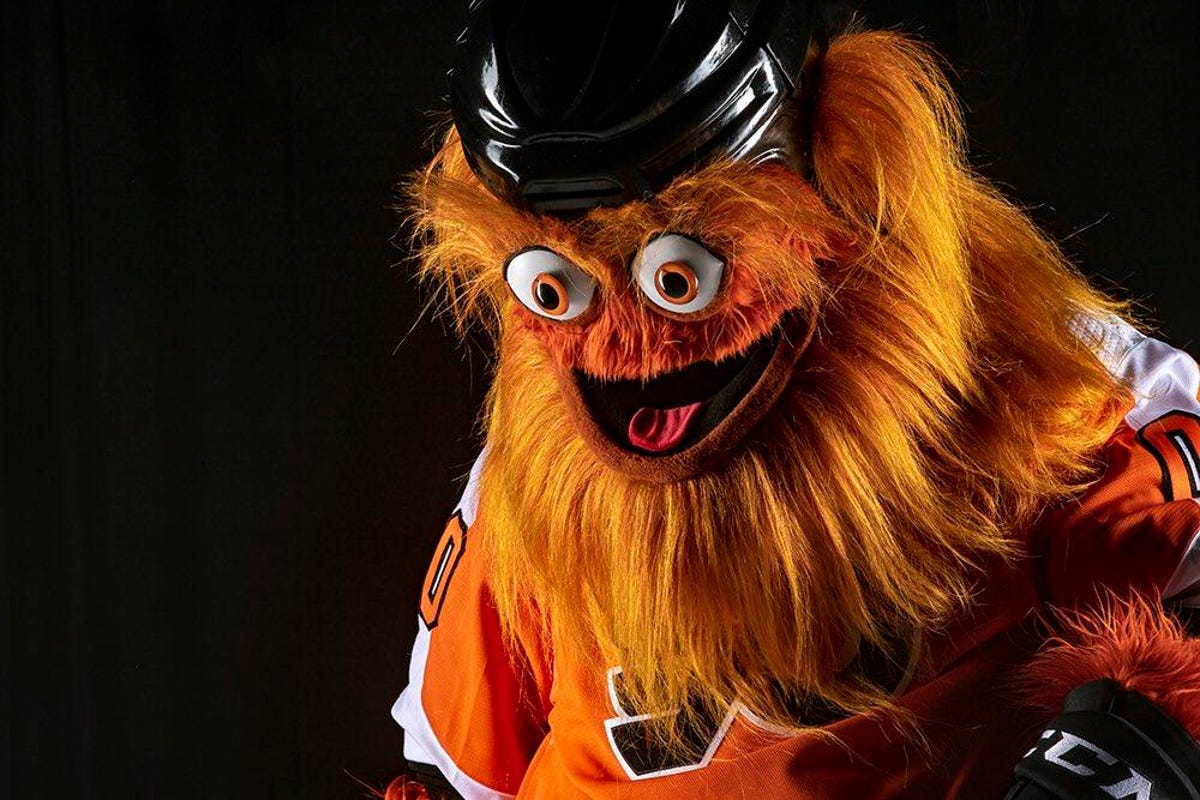 If you gaze into the abyss, the abyss gazes also into you.

The mascot of the Philadelphia Flyers NHL team burst onto the internet on Sept. 24, 2018, horrifying and delighting the world in equal measure. And now, with his DGAF attitude and his necromancy-at-the-puppet-store aesthetic, he is a totem for our despair.

Gritty was ostensibly birthed as a mascot for a team that had been mascotless since the ’70s. According to Flyers VP of marketing and communications Joe Heller, the team “wanted him to be a character that you were likely to go up and give a high five to, and not really go up and hug.”

After culling more than 100 character designs, the Flyers eventually came down to two options.

“One was safe, cute and cuddly, and the other one was Gritty,” says Heller. “We never really wanted to go the safe route.”

Pennsylvania-based concept artist Brian Allen of FlyLand Designs described his winning sketch as a “big dumpy monster” and an “anti-mascot.”

“The initial negative reaction was overwhelming at first (and maybe even a bit terrifying!)” he said. “[But] in a few short weeks, he became more than just the Flyer’s mascot: he was the mascot of the internet.”

Gritty’s brief started simply enough. After his first appearance (Heller admits he “came out a little startling”) he was tasked with wobbling comically over the ice, amping up crowds and generally thrusting and T-shirt-cannoning his way into the hearts of the people of Philadelphia (with his belly maintaining a momentum all of its own).

But from day one, there was something stirring beneath the surface of his felt-rimmed eyes. And like all timeless symbols of the modern age, he quickly outgrew his semiotic boundaries.

He parodied Kim Kardashian, fought a child during a game intermission and got punched by Ricky Gervais. And perhaps strangest of all, this Cheeto-bright amalgam of hockey concussion fever dreams and outlet-store fabric offcuts became a heraldic figure of the left and the hard-line antifa movement.

A resolution put forward in October by Philadelphia City Council member Helen Gym described Gritty as “a fuzzy eldritch horror,” “an acid trip of a mascot” and “a shaggy orange Wookiee-esque grotesquerie.” But while Philly had birthed a hideous monster, the consensus was clear: “He’s our hideous monster.”

But Gritty also spoke to us on a deeper level this year.

His is the dead-eyed frenzy of a world pushed to the edge. He is the Mr. Hyde to our Dr. Jekyll, the avatar we secretly wish we could embody as we tromp through 2018, watching the world disintegrate as we crush the skulls of the vanquished beneath our novelty PVC ice skates.

Sorry @AdventureAqua, fish plushies are a real trigger for me. pic.twitter.com/ChrBO34mrG

Because the world is burning and all we can do is watch the conflagration.

Technology is propelling us to dizzying new heights and humanity has the tools to be faster, smarter and more advanced than ever before. We should be reaching our giddy apotheosis, but instead we’re using technology to beat the world into pieces.

Social media allows us to instantly connect with like-minded people across the globe, but it’s become little more than a cesspool of egg people and anime avatars screaming at each other about giant cows and bitcoin.

Our democracy and discourse have been co-opted by a constituency of bots, spreading weaponized misinformation across the internet like some kind of algorithmic influenza.

We have built platforms that democratize content creation, allowing everyone to reach the world from a camera inside their bedroom. But instead of watching budding creators in the making, we click relentlessly on the latest manchild filming a dead body in a suicide forest.

We have unimaginably powerful devices at our fingertips and we use them to zombie scroll through fitspo influencers shilling laxative shakes on Instagram. Our obsession with instant gratification and speedy delivery has given way to a reckless abandonment of workers’ rights not seen since Dickensian England. Our personal data hemorrhages from unseen servers at dizzying rates and all we can do is hope that our records get lost in the noise, that no one finds the detritus of our digital identity on the dark web.

And the tech tycoons — those aspirational, upstart nerds who were supposed to be symbols of success through smarts — they’ve turned into billionaire “boy kings,” profiting off machines that chew up our data, our privacy and our digital lives.

Silicon Valley was once the light on the hill, that aspirational Land of Oz promising to bring our futuristic dreams to life. But there is a rot in the Valley that is becoming harder to ignore.

We’ve pulled back the curtain of flimflam to find weed-smoking billionaires shooting cars into space, sexist algorithms, robot brothels and Wi-Fi-connected fruit juicers. And beneath it all, a thrumming vein of VC profligates funding yet more products and services that promise to make the breezy lives of the technoclass that little bit easier.

But as we stared into the abyssal void of our dystopian future, this year, we were no longer alone. Gritty joined our struggle — the guardian muppet watching over us in this new purgatory.

Because we might not be able to change the world, but we can watch it burn. Eyes rolling uncontrollably, slack-jawed mouth agape, laughing at the destruction and the absurdity of it all. Waiting to take back the power in our cold, squeaky hands. Like Gritty. Because in 2018, we are all Gritty. And Gritty is all of us.

Culture: Your hub for everything from film and television to music, comics, toys and sports.

Movie Magic: The secrets behind the scenes of your favorite films and filmmakers.