iPad shoppers, I have frustrating news for you. There’s no perfect iPad anymore. This is the state of iPads, early 2023: lots of choices but no clear-cut, absolute winner. But there are specific shopping tips we can offer. And, some good news. This year’s Black Friday iPad deals make some of the best budget iPad choices even more affordable.

The latest iPads have confused the landscape further. The 10th-gen iPad is more expensive than the 9th-gen iPad, which remains on sale. The 10th-gen model has a better-placed front-facing camera for video chats, a larger screen, a faster processor and USB-C charging, but needs its own cases and a very weird dongle for charging the first-gen Pencil.

Meanwhile, the newest iPad Pros get better M2 processors, faster Wi-Fi 6E and 5G connectivity and a new “Pencil hover” tool for proximity-based previews of art tools, but the design remains the same and the front camera placement hasn’t been fixed, which remains frustrating for anyone who was hoping to use the iPad Pro for work-based video chats when in landscape mode. Also, iPadOS is no closer to replacing your Mac, except for Stage Manager’s external monitor support coming later this year.

The best iPads for now may arguably still be older models: The 9th-gen iPad is the best choice for kids and budget shoppers a year after its debut.

Meanwhile, the iPad Air, released earlier this year, remains the best “Pro on a budget” iPad with its fast M1 chip and Pencil 2 support. It doesn’t fix that front camera either, though, so if looking good on Zoom and FaceTime matters the most, consider that 10th-gen iPad instead.

There’s a $120 starting price gap between the $329 entry-model 9th-gen, which remains in the line, and the new $449 10th-gen version. That gives the older model a bit of an edge over the new one, despite the latter’s slightly larger display, side camera, better processor and USB-C connection — especially if you only really need one of those upgrades, like the camera relocation. If you need all those upgrades and can afford it but don’t need an M1 CPU, the step-up model makes sense.

Whichever model or screen size you go with, all the current iPads support the latest version of iPadOS (a version of iOS specifically for iPads) and either the first- or second-gen Apple Pencil — though the most recently released 10th-gen model’s Pencil support is less than elegant. Let’s just say there’s a dongle involved, which is rarely a good thing. Apple is supporting external monitors as an extended desktop for iPads with an M1 chip or better via a software update to iPadOS 16 that’s coming later this year, but the feature, called Stage Manager, remains buggy and feels experimental.

No matter what iPad you buy, there are ways of connecting keyboard cases, Bluetooth and otherwise, although your options will vary. That’s good news for anyone who wants to do more than stream videos and music, browse websites and play Apple Arcade games. Plus, all the current iPad models support mouse and trackpad use, for a more MacBook-like experience. The Apple Magic Keyboard is compatible with the iPad Pro and iPad Air, but not the 10th-gen iPad (which has a new Magic Keyboard Folio case instead).

Check out the selections below to find the best iPad for your needs. And then read further for more advice. 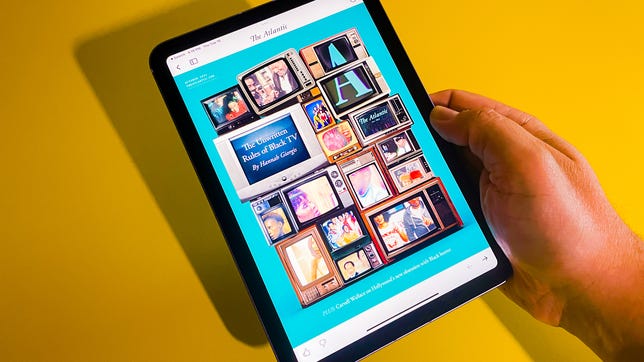 We’ve always appreciated the entry-level iPad for its affordable price. Last year’s entry-level model is less expensive than the newer 10th-gen iPad, and is still very functional: Its older A13 chip and Lightning-charger-equipped, Touch ID home button design all feel somewhat out of date but work fine. This iPad’s screen size is perfect for everyday work and fun, there’s an auto-zooming front-facing Center Stage camera, and unlike the 10th-gen iPad, the first-gen Apple Pencil doesn’t need a dongle to work. It’s still compatible with a range of keyboard cases, too. 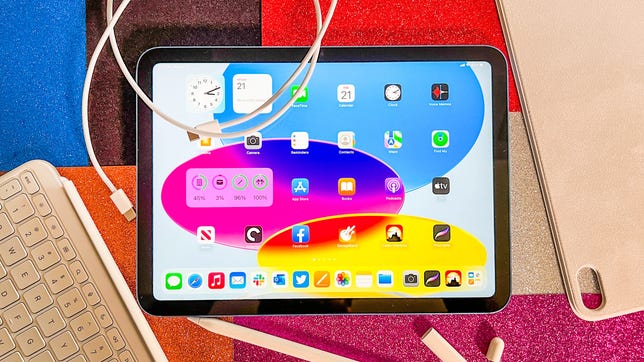 The iPad for serious video chatters

The step-up new entry-level iPad has a whole new design and now has USB-C, a faster A14 chip and a larger display. Its best feature, though, is a repositioned front-facing camera that finally centers video chats properly in landscape mode, which is how most people use their iPads when they’re connected to keyboard cases. If you’re someone who needs to Zoom a lot on an iPad, this is worth the extra price over the 9th-gen model if you can afford it. The downside is the bizarre lack of support for the Pencil 2, requiring you to use a first-gen Pencil and a USB-C charge dongle (not included) for sketches and note-taking. 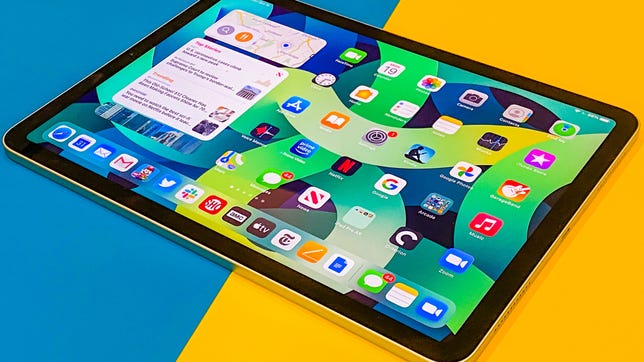 The iPad Air costs less ($599) than the iPad Pro, but has less starting storage (64GB). It adds an M1 processor similar to that of the iPad Pro from 2021, a 5G option, and a Center Stage front-facing camera. It doesn’t have the better-placed front camera of the 10th-gen iPad, but supports Pencil 2 and has a better processor and display. The only points where it lags compared to the 11-inch Pro are a slightly slower processor, that new Pencil 2 hover support, and faster connectivity. You still might consider the Pro worth it, depending. But keep in mind that the 2021 iPad Pro, if it’s on sale for less, is the better buy: It has a faster-refresh display, better rear cameras, Face ID/lidar and a faster Thunderbolt USB-C port. 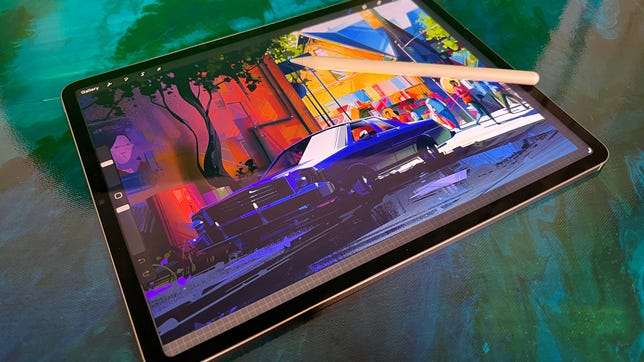 Apple’s 2022 iPad Pro refresh added a more powerful M2 chip, faster Wi-Fi 6E and optional 5G connectivity, and a new Pencil 2 “hover” feature that activates the display when the stylus is in close range. Not many apps take advantage of hover, though, and the rest of this iPad design’s the same as the previous model. The iPad Pro lineup are still the only models with faster 120Hz variable refresh rate displays, a step-up Mini LED HDR display on the 12.9-inch model, Face ID and depth-sensing lidar cameras and a faster Thunderbolt 4 port. If you don’t mind that the front-facing camera isn’t landscape-oriented yet like the 10th-gen iPad’s — and you have the money to burn — this is the most advanced model, but it doesn’t get you any closer to being a Mac. 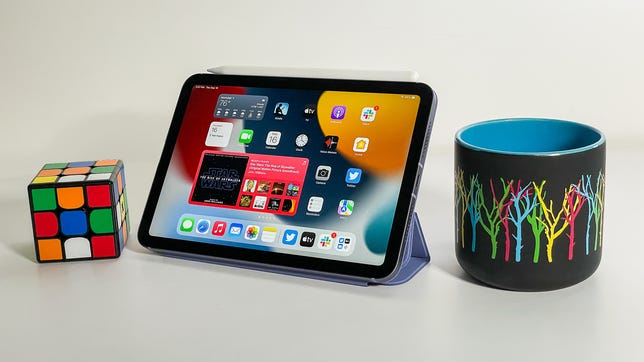 If you don’t care about a keyboard case (even though there are some small ones that will work with it), this tinier iPad mini, while expensive, is still a great portable pick. Its newer design supports the Pencil 2, it has USB-C, and its processor is plenty fast enough. For note-taking, reading, games and movies, this is an enticing choice.

What are the differences among the top iPad models?

The 11- and 12.9-inch iPad Pro models now have M2 processors, while the 2022 Air is powered by the M1 processor, the chips found in Apple’s latest Macs. Along with the new processors, the iPad Pros have better Wi-Fi 6E and faster 5G mmWave connectivity, Face ID cameras on the front and dual cameras and lidar depth sensors on the back, 120Hz variable refresh rate displays, a Mini LED Liquid Retina XDR display on the 12.9-inch model, a higher-speed Thunderbolt USB-C port, and a new proximity-based Pencil hover feature that could be used to show previews of art tools on compatible apps.

Can I use an iPad instead of a MacBook?

Sort of. Its processor is as powerful as a MacBook Air’s, and it works with Bluetooth keyboards and Apple trackpads. But it’s held back from acting as a true replacement by iPadOS; that means, among other things, no useful dual-monitor support (it can only mirror, not extend, to a second display) and no support for full desktop applications. Though you might pooh-pooh the latter — after all, Apple says you can do it all with an iPad — for most school and work requirements, you’ll find at least one thing you need to do on a laptop. For instance, even if I could do my job on an iPad Pro (and it’s not even close), in order to access some corporate locations I have to run the VPN, which is only available on company-issued systems.

Many limitations of current mobile apps have carried through into iPadOS. In some cases it may just be because developers are still building out apps and haven’t yet gotten them to full feature-dom yet, though there’s no guarantee they ever will get there. Adobe Lightroom is a fine “light” Lightroom, but Adobe intended it from the start to be mobile-first, and thus lack some features important to professionals, including wired tethered shooting, optimization for local file storage (rather than cloud) and the ability to intelligently handle raw plus JPEG.