Indonesia has welcomed two baby Javan rhinoceroses to a family of one of the world’s most endangered species, the environment and forestry ministry said.

Hidden camera footage released by the ministry at the weekend showed a small rhino trudging alongside another almost three times its size in the muddy terrain of the protected Ujung Kulon National Park on the western tip of Java island. 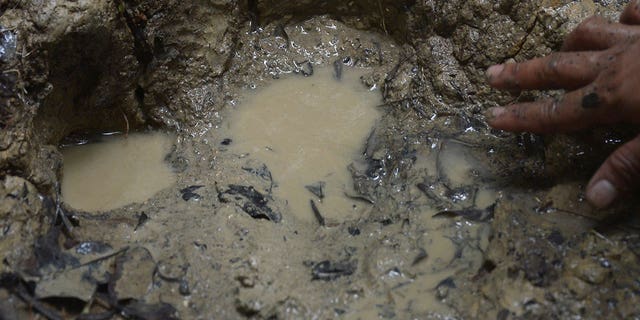 A rhino footprint has been spotted on Nov. 16, 2013, in the protected Ujung Kulon National Park of Java island, Indonesia.
(ADEK BERRY/AFP via Getty Images)

Javan rhinos, which are distinguished by their single horn, were once found throughout northeast India and Southeast Asia. Today they are among the most threatened of the five rhino species, mainly due to poaching.

There are now 77 Javan rhinos in Ujung Kulon, the ministry said.