Boston Celtics 7ft 5in rookie Tacko Fall has been placed in the NBA’s concussion protocol after banging his head while on a low ceiling while washing his hands.

The 23-year-old center from Senegal missed Boston’s season-opening 107-93 defeat by the Philadelphia 76ers on Wednesday as he had entered the league’s concussion protocol two days earlier after experiencing delayed symptoms.

“Tacko got hit in the head after individual work,” Celtics head coach Brad Stevens said on the eve of the match. 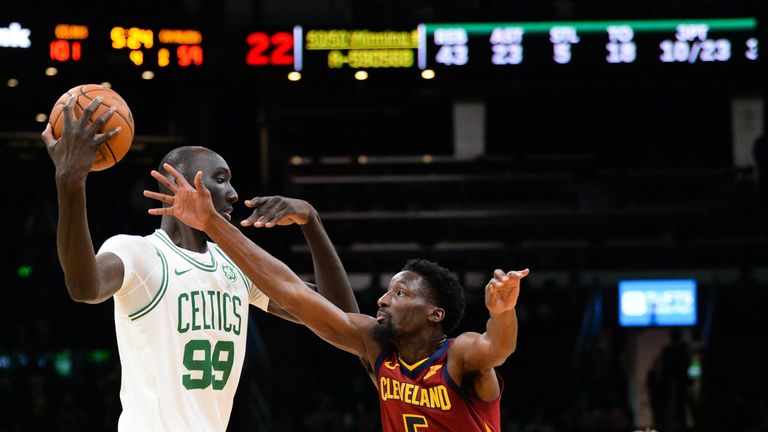 Image:
Fall has the biggest wingspan since the NBA began recording the statistic in the 2000-2001 season

“He was a little under the weather.

Stevens added on Wednesday that Fall, who had signed with the team as an undrafted free agent in July, was expected to make a recovery “real soon”.

NBA protocol requires a player to be without any concussion symptoms at rest. A doctor will then evaluate the player and put him through a “return-to-participation” exertion protocol before a team doctor and NBA’s concussion program director clear him.

Fall was the headliner at the draft combine this year with the biggest wingspan (8ft 2.25 in), standing reach (10ft 2.5in) and height with shoes (7ft 7in) since the NBA began recording statistics in the 2000-01 season.

He is joint fifth in the list of tallest NBA players ever, behind only Gheorghe Muresan and Manute Bol (both 7ft 7in) and Shawn Bradley and Yao Ming (both 7ft 6in).