LEYTON ORIENT have been forced to move their cup clash with Brighton Under-21s – amid concern 2,000 Ajax fans could gatecrash.

Police advised the East London club to switch the Leasing.com Trophy match back 24 hours from November 5 to avoid any fireworks. 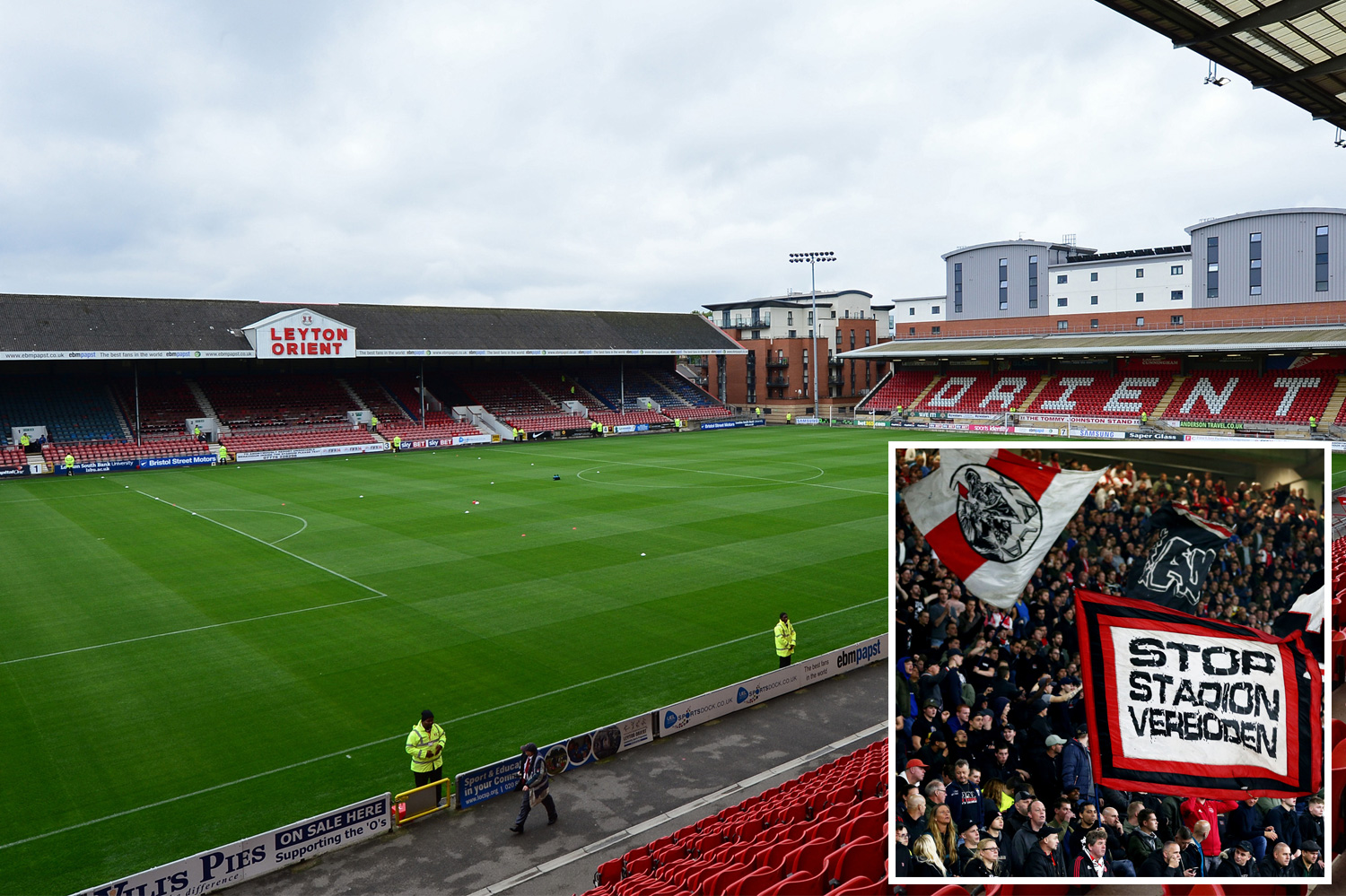 1 Orient have switched their cup match on police advice amid fears 2,000 Ajax fans will attend

The Amsterdam club were banned from attending their Champions League return against Chelsea at Stamford Bridge.

So they opted to still fly over having already booked tickets and instead go to the O's clash with the Seagulls kids.

Ajax were hit with the travel ban after their supporters got into trouble at Benfica last season.

Their punishment was originally suspended but after trouble flared at their match in Valencia this month, Uefa stopped them from attending.

Their fans also clashed with police outside the Tottenham Hotspur Stadium ahead of the semi-final first leg clash last season.

Ajax fans had booked flights and accommodation for their trip to London on November 5.

They approached Orient to let them go to that match.

But after talks with police, the O's have now moved the Football League Trophy group match back to November 4.

Ajax fans will still travel in their numbers and could loiter in pubs around Chelsea, prompting even more safety concerns.

Thousands of ticketless Ajax fans watched their semi-final with Spurs in pubs in North London.

Latest Chelsea newsLive BlogBLUES LATEST Chelsea news LIVE: Latest news and gossip from Stamford Bridge KAN'T BE SURE Kante out indefinitely as Lampard gives injury update ahead of Burnley clash GossipMILIN AROUND Chelsea join Man Utd in race for Milinkovic-Savic with hope of cut-price deal FEEL THE BURN How Chelsea will line-up at Burnley with Lampard's star-studded English kids NO WINTER BLUES How Chelsea could line up in January with Werner, Chilwell and Ake

One Ajax fan took to Twitter, pleading to Orient: "Dear @leytonorientfc. Are you willing to host 2,000 Ajax fans?"

"We are systematically and unlawfully screwed by @UEFA and @metpoliceuk.

"Lots of us booked transport and hotels already and will travel."

Dear @leytonorientfc. Are you willing to host 2.000 Ajax fans? We are systematicly and unlawfully screwed by @UEFA and @metpoliceuk. Lots of us booked transport and hotels allready ans will travel. You might risk a great atmosphere and memories forever. Kind regards, pic.twitter.com/hzWgJ0GVBF

Typical. The fans always come last when these changes are made. No-one seems to care that we have to make plans in advance. I was going to boycott this match on the Tuesday. Now I have to boycott it on Wednesday instead.#BTeamBoycott #LOFC

Much better for us! Tuesday Ajax in the pub.. Wednesday to your game 😉 Thanks Police! 🐷

Dear Leyton Oriënt fans. Thanks for your hospitality. We’re not going to misuse your beautiful club. Our joint struggle for our beloved game is more important. We will find other ways to support Ajax on november 5th. Good luck against Carlisle. Tickets for Scunthorpe are bought😉