BRISTOL CITY striker Famara Diedhiou sparked a mass brawl and was then sent off after repeatedly kicking a Charlton defender when he was on the floor.

Addicks captain Jason Pearce fell to the ground trying to protect the ball and Diedhiou kicked out three times as the ball was trapped under Pearce's legs. 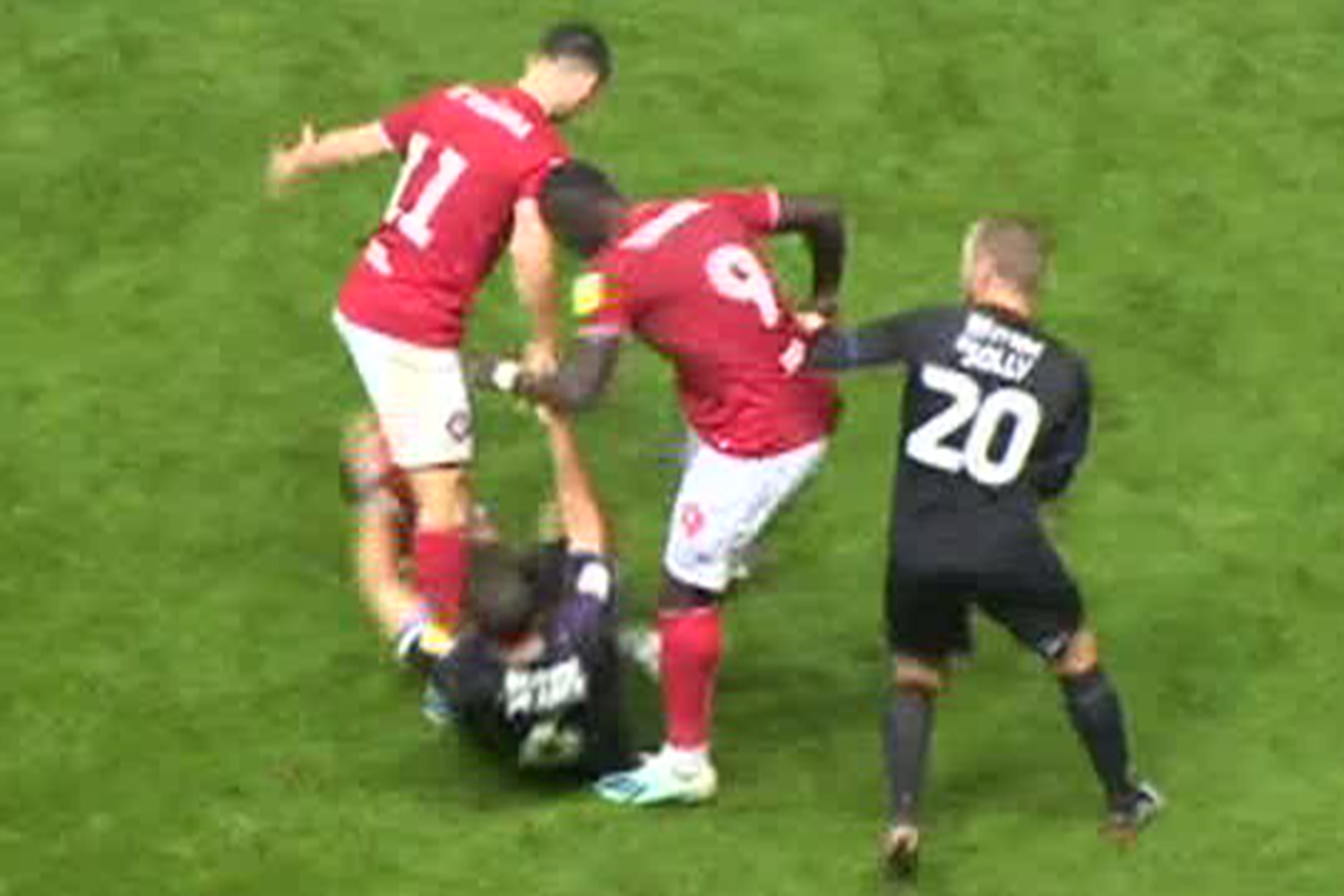 5 Famara Diedhiou sparked a mass brawl after kicking Charlton defender Jason Pearce when he was on the floorCredit: Sky Sports 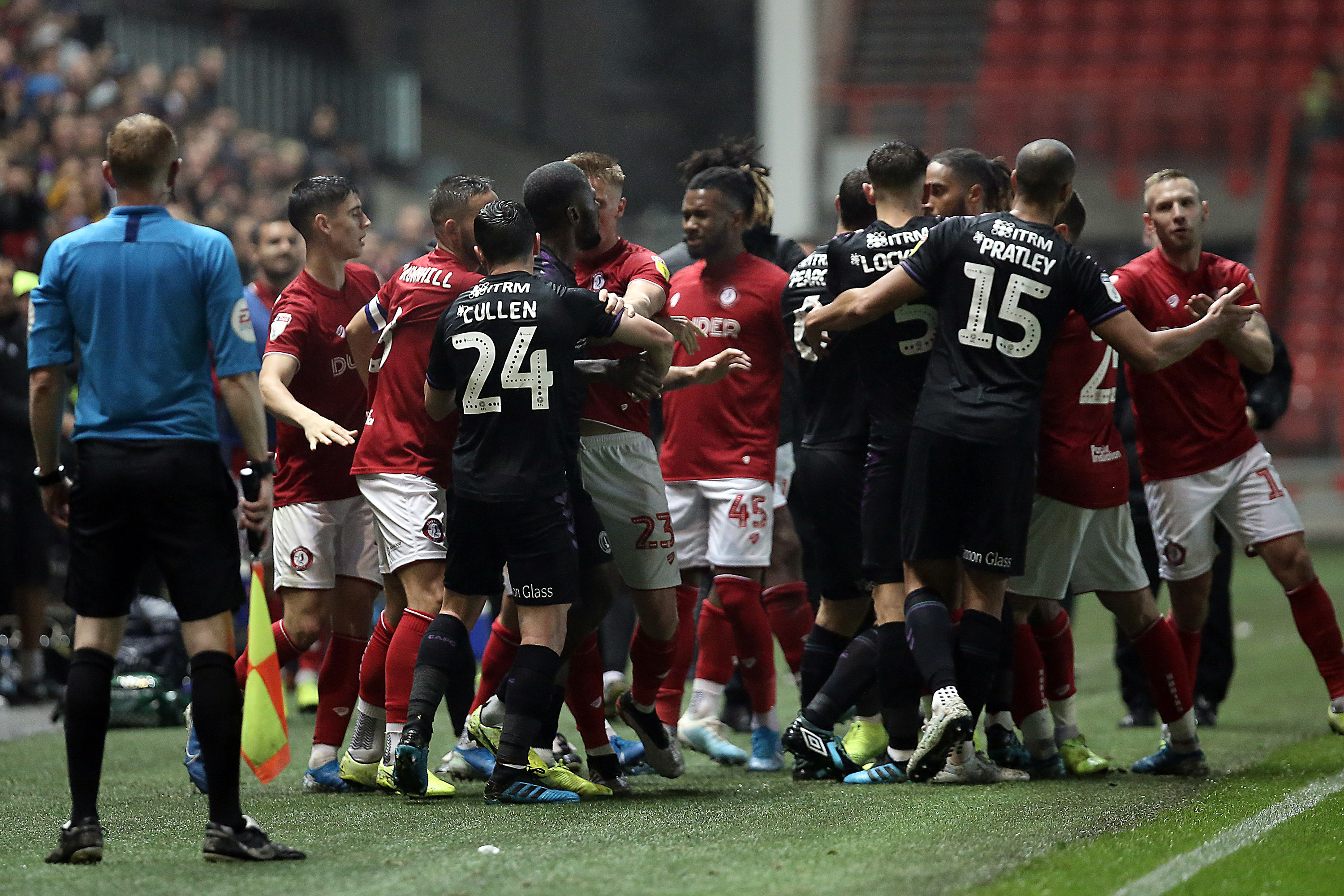 5 Players from both sides weighed in after the incidentCredit: �UK Sports Pics Ltd / Dave Peters 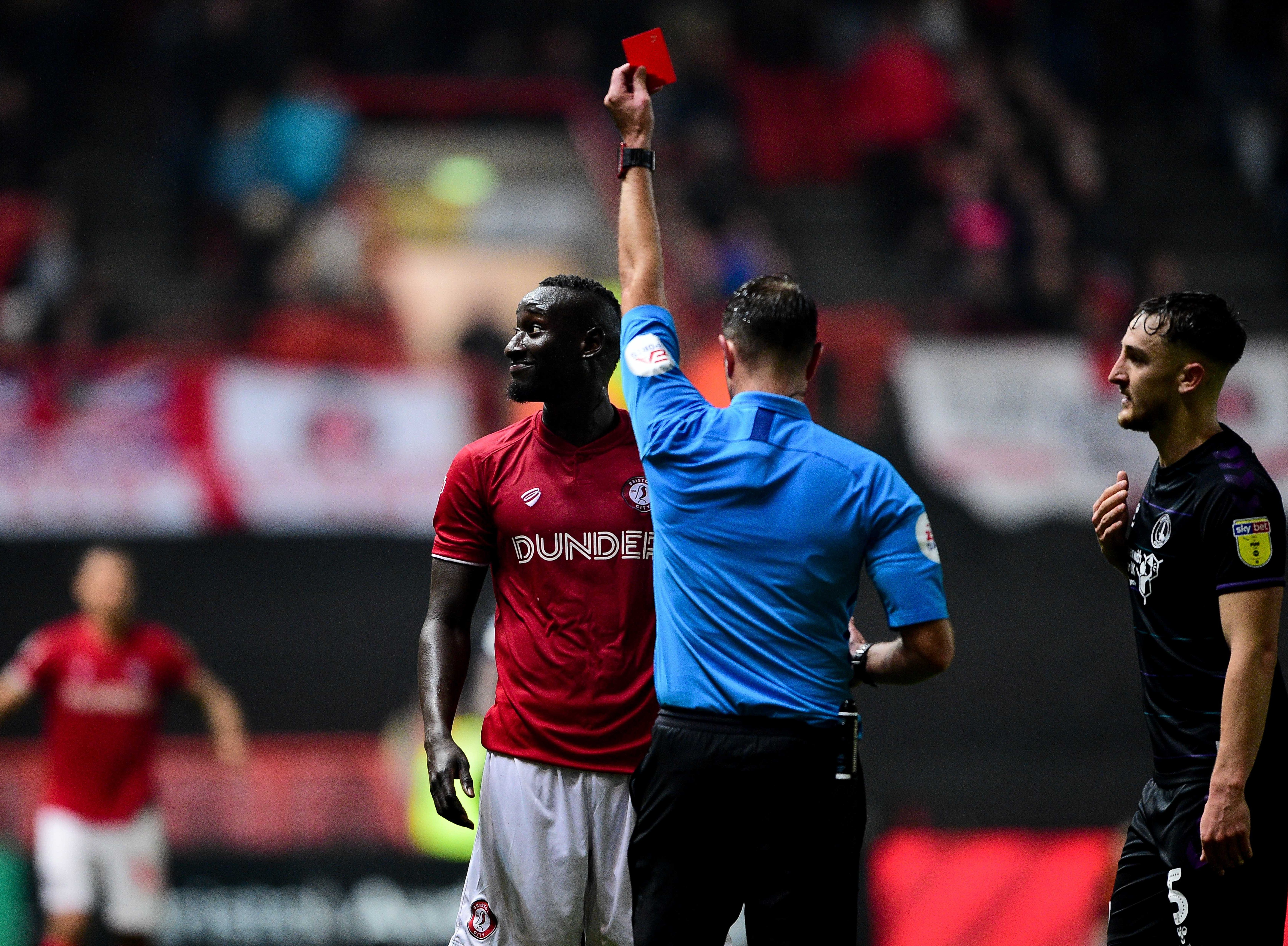 5 The striker was sent off by the referee but he did not agree with the decisionCredit: Rex Features

The third and final kick appeared particularly violent and appeared to connect with the 31-year-old's lower back.

When the third kick landed, Pearce lost his head and leapt up to confront the Robins' frontman.

Several of Pearce's Charlton teammates weighed in to help their captain and a monumental shoving match ensued.

The aggravation eventually simmered down and the referee showed Diedhiou a swift red card.

The striker looked shocked by the decision and his manager Lee Johnson was equally confused after the game.

He said: "I’d like to see it again, at the time I didn’t feel that it was a sending off because the ball was there to be won.

"The third attempt to play the ball is probably on the referee’s whistle which is why it made it look worse.

"But obviously when the lad’s rolling on the ball and he just fouled Famara that hasn’t been given, it’s there to be won.

"Yes, he’s 100 per cent going for the ball but obviously the player is jumping and diving across it both ways.

"Obviously that makes it look worse but the communication between the three officials was astounding really.

"How they’ve got to that from the ref saying no, he went to speak to the linesman who said no and then the fourth official for some reason has decided with the worst angle of the lot of them to give the red.

"And that was the first thing that he piped up with all day.

"I can hear him, I spoke to the assistant, he said he didn’t give it, the referee went to ask the assistant what he had seen and he said nothing.

"It’s a yellow or whatever and then the fourth official going ‘red, red, red’ down the mic, all overexcited." 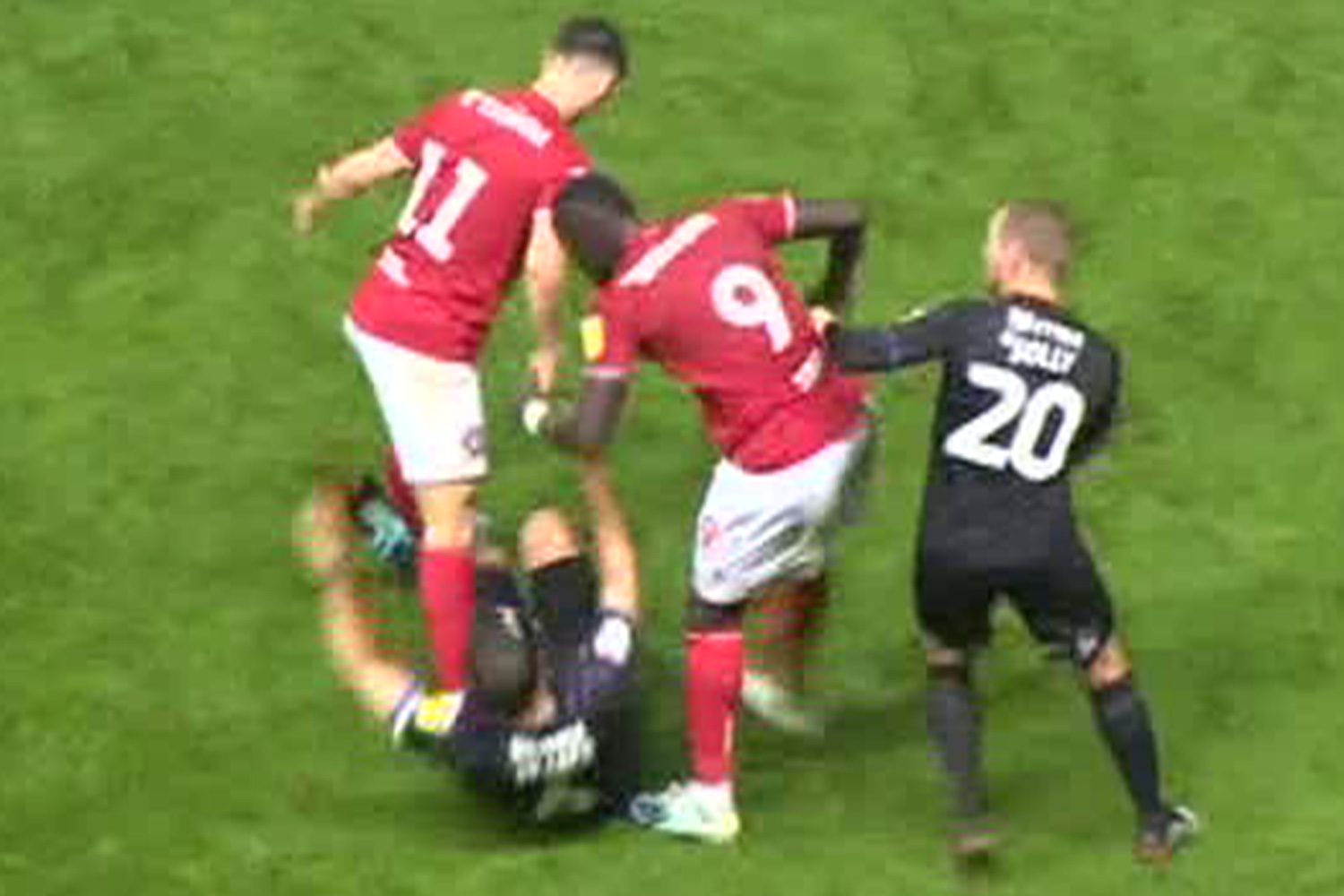 5 Pearce had the ball trapped between his legsCredit: Sky Sports 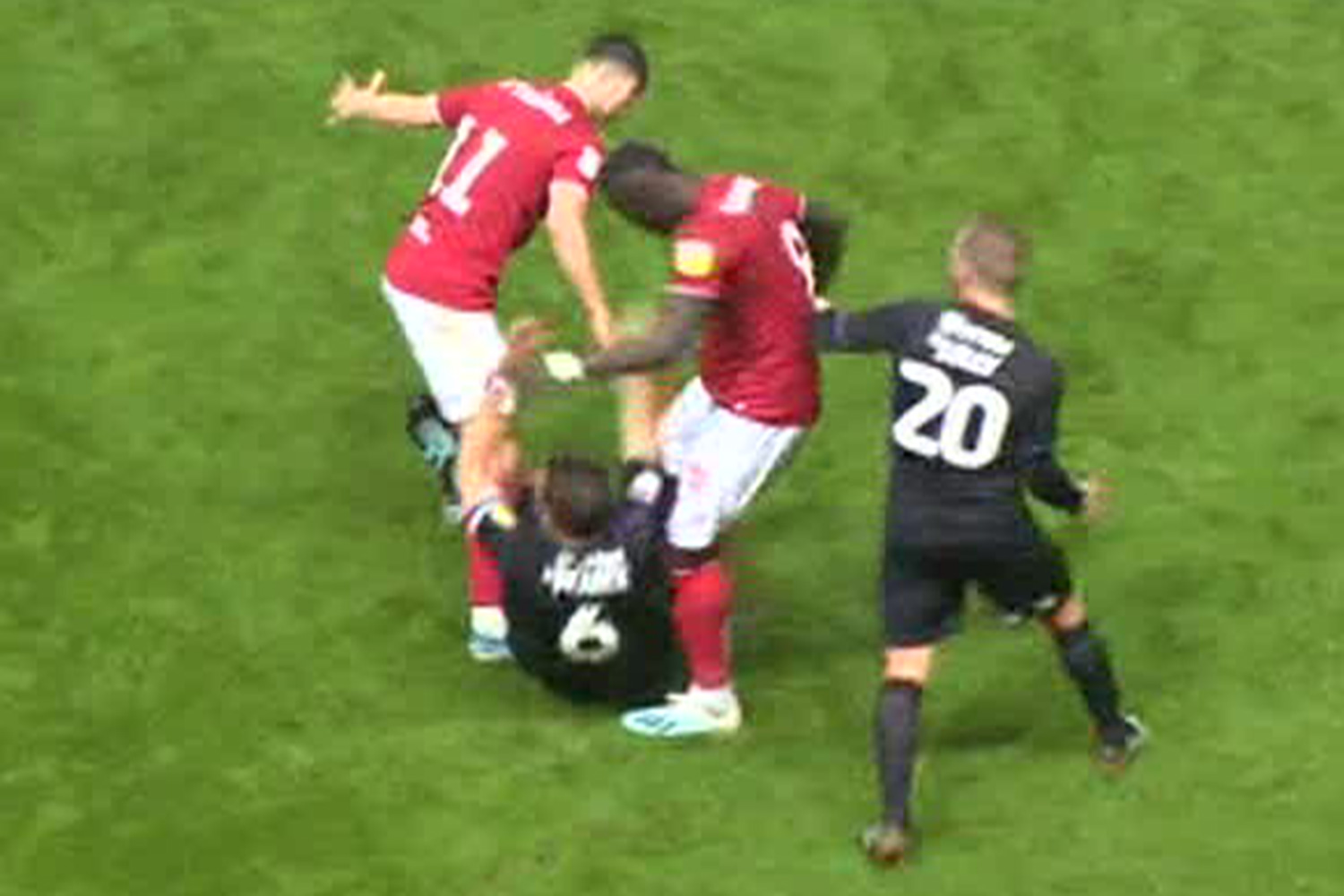 5 The Addicks were not happy with the striker's actions and retaliatedCredit: Sky Sports