A MASS brawl erupted during a Mexican top flight football game that saw groups of yobs beating a man with poles, belts and sticks.

The ugly scenes took place during a game between San Luis and Queretaro and the game was understandably called off after violence spilled onto the pitch. 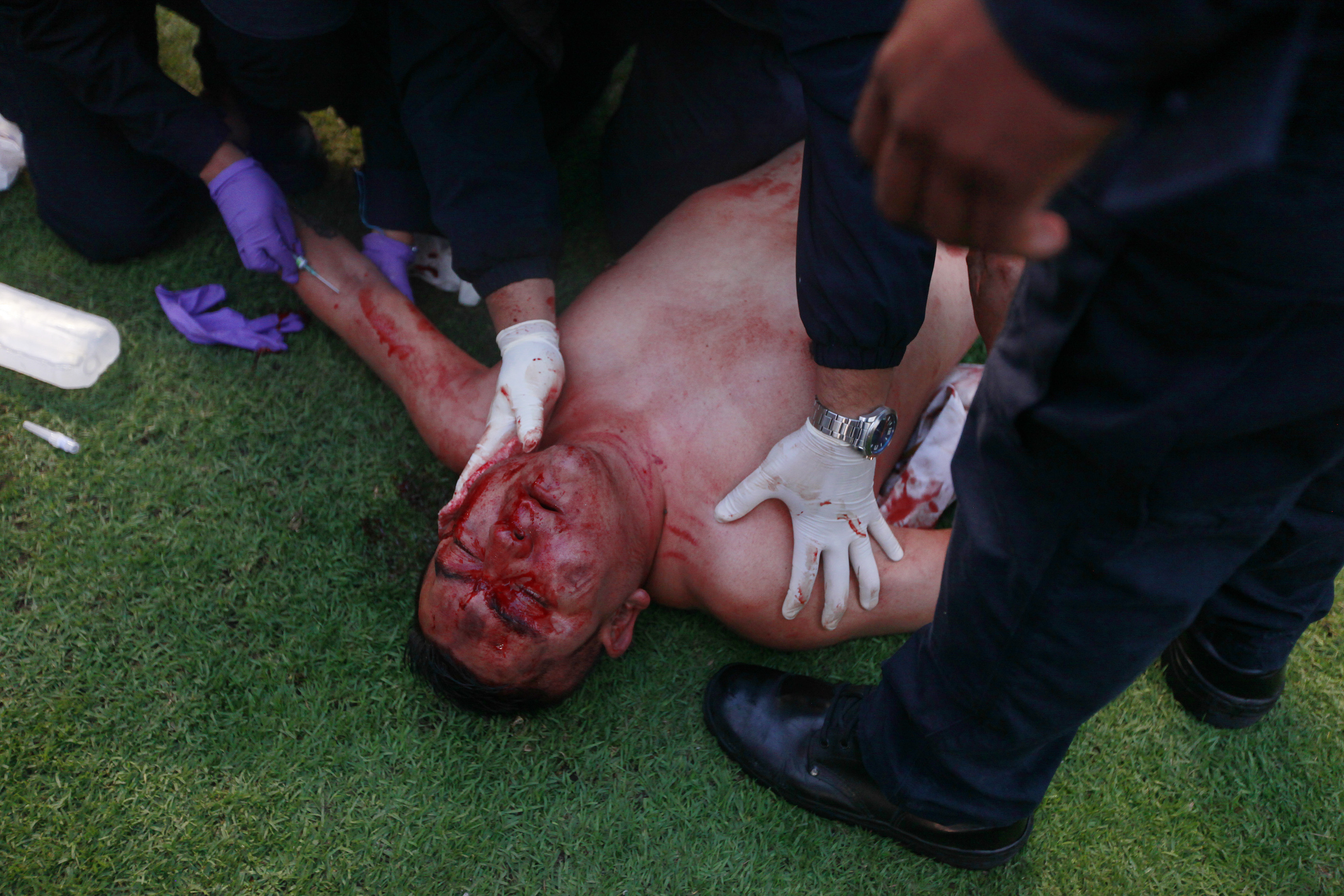 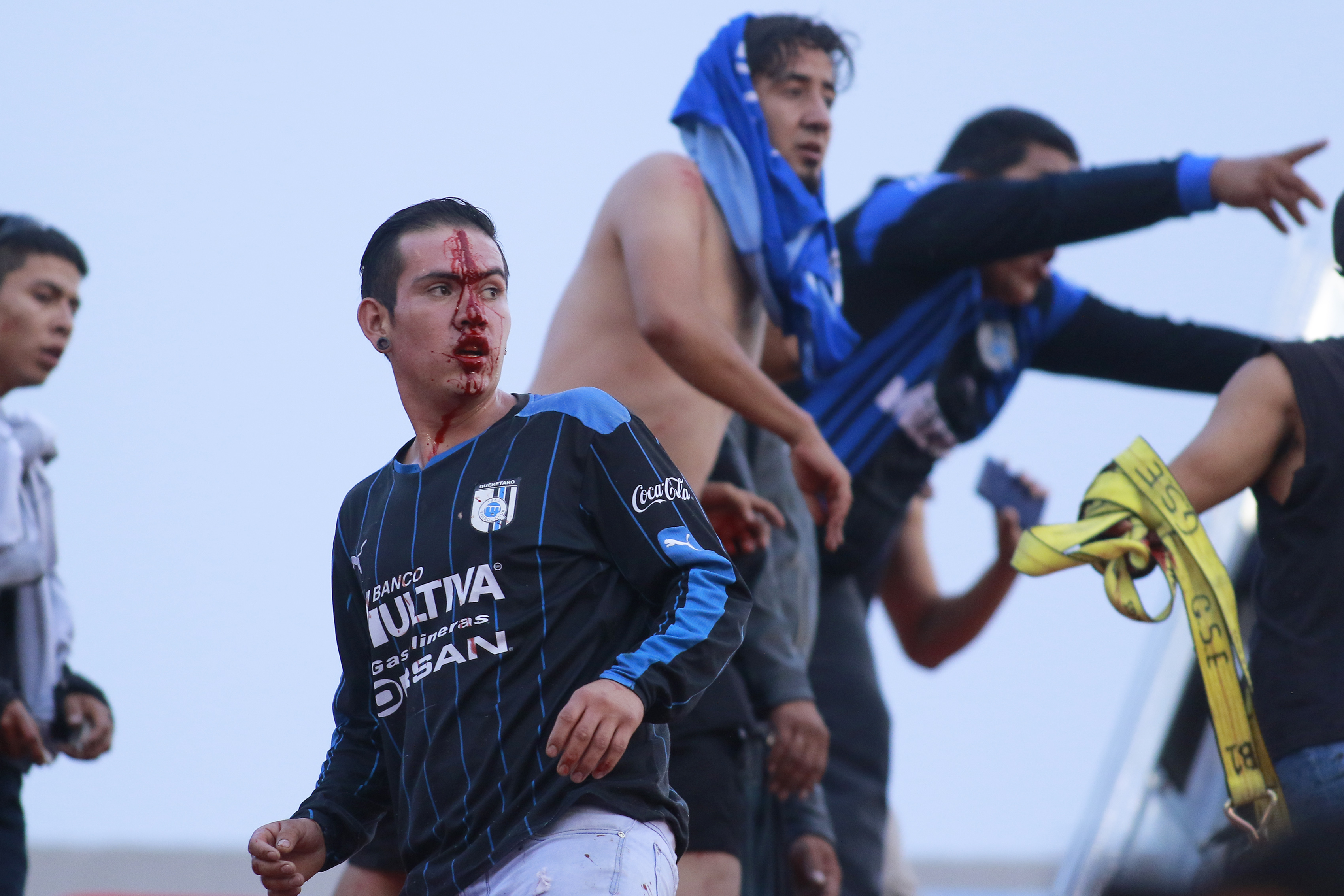 6 Hundreds of fans were involved in the running battles on the terracesCredit: Getty – Contributor

Queretaro were the visitors and led 2-0 with around five minutes remaining when the violence exploded in the stands on Sunday.

And in one particularly harrowing shot, a man can be seen lying on the floor while a group surround him and savagely beat him him with what look like sticks or metal poles.

He was dragged along the terraces before men took turns to repeatedly kick, punch and beat the man who was flopping around like a rag doll.

Fans from other parts of the stand poured onto the pitch as the chaos continued.

A young boy was also spotted crying after he was forced to run onto the grass through fear of being attacked.

Some reports suggest violence erupted after a San Luis fan was set upon by Queretaro supporters at which point "dozens came to his aid".

It was 43 minutes after the game had been stopped when the stadium announcer finally announced the situation was under control.

ESPN's Karen Pena reported at least 37 people were injured in the melee.

Images surfaced online showing bloodied and injured fans being stretchered and helped away from the scene.

Riot police eventually intervened to try and get the frightening situation under control.

Queretaro's players were reportedly guarded for two hours after the game to protect them from the violent thugs.

Liga MX released a statement condemning the violence and calling for authorities and the Mexican football federation to investigate the situation and impose appropriate sanctions.

San Luis coach Gustavo Matosas said: "It's a situation that leaves us all sad and very worried.

"It's something that we don't want to see happen in football." 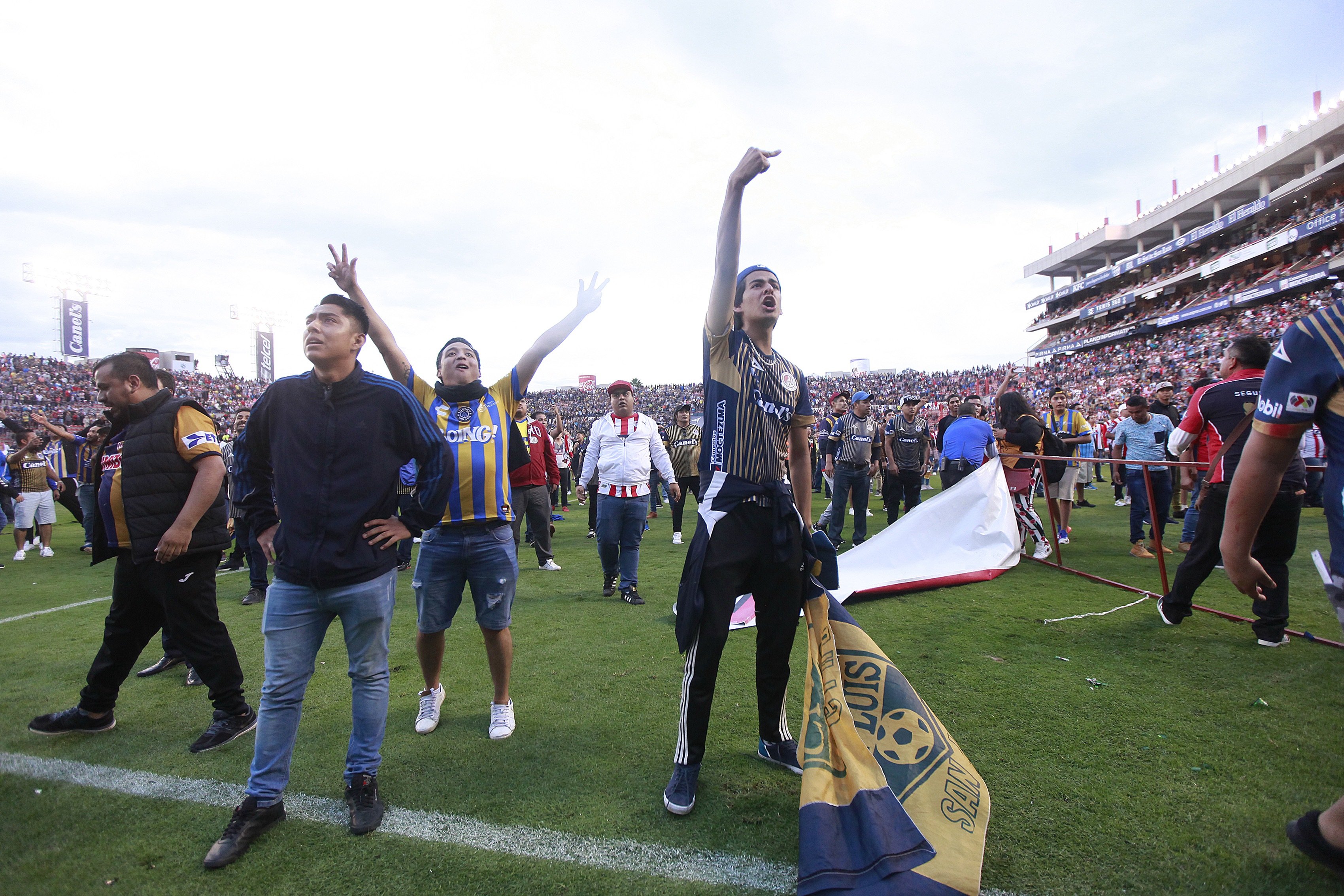 6 Fans spilled onto the pitch causing the game to be abandonedCredit: Getty – Contributor 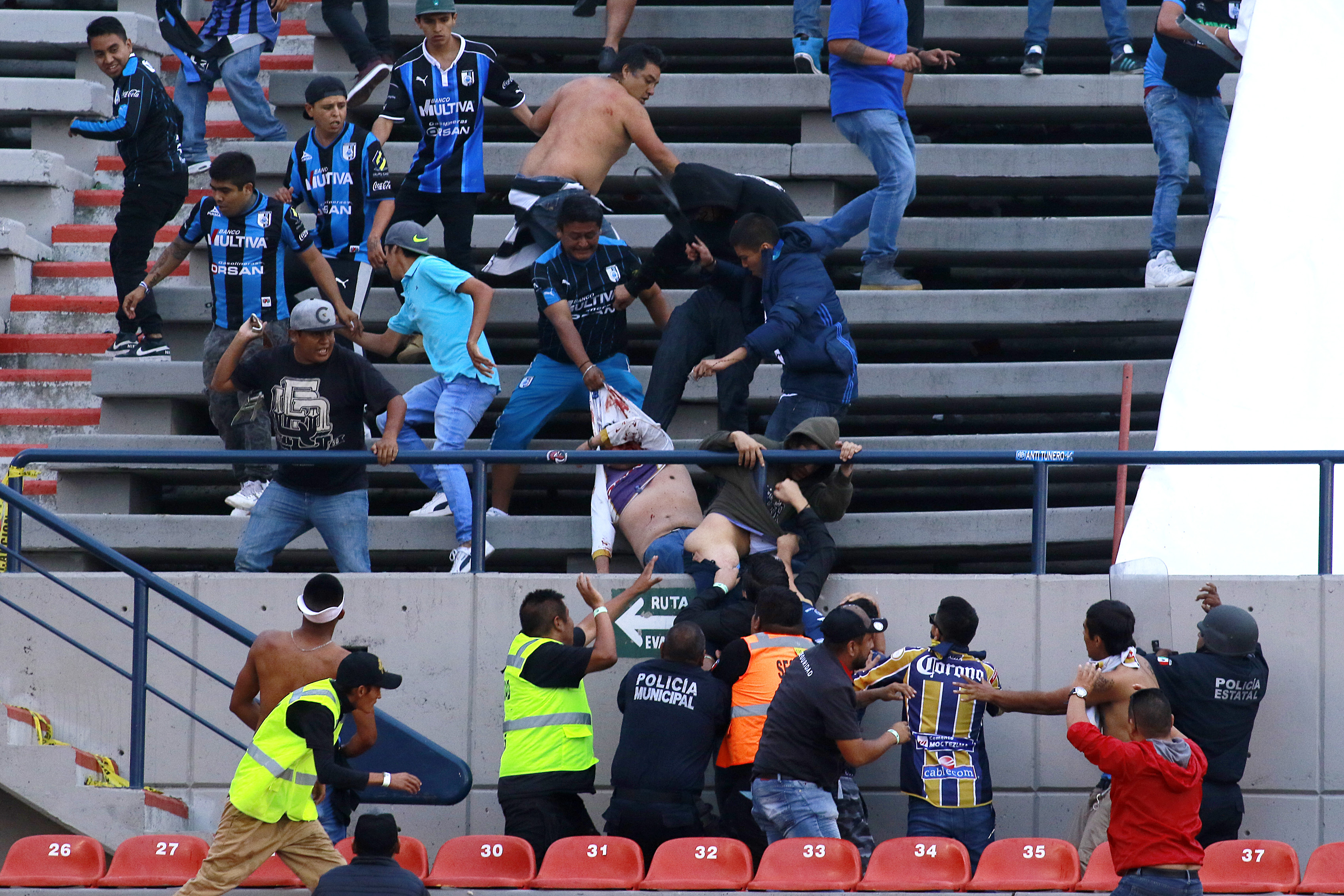 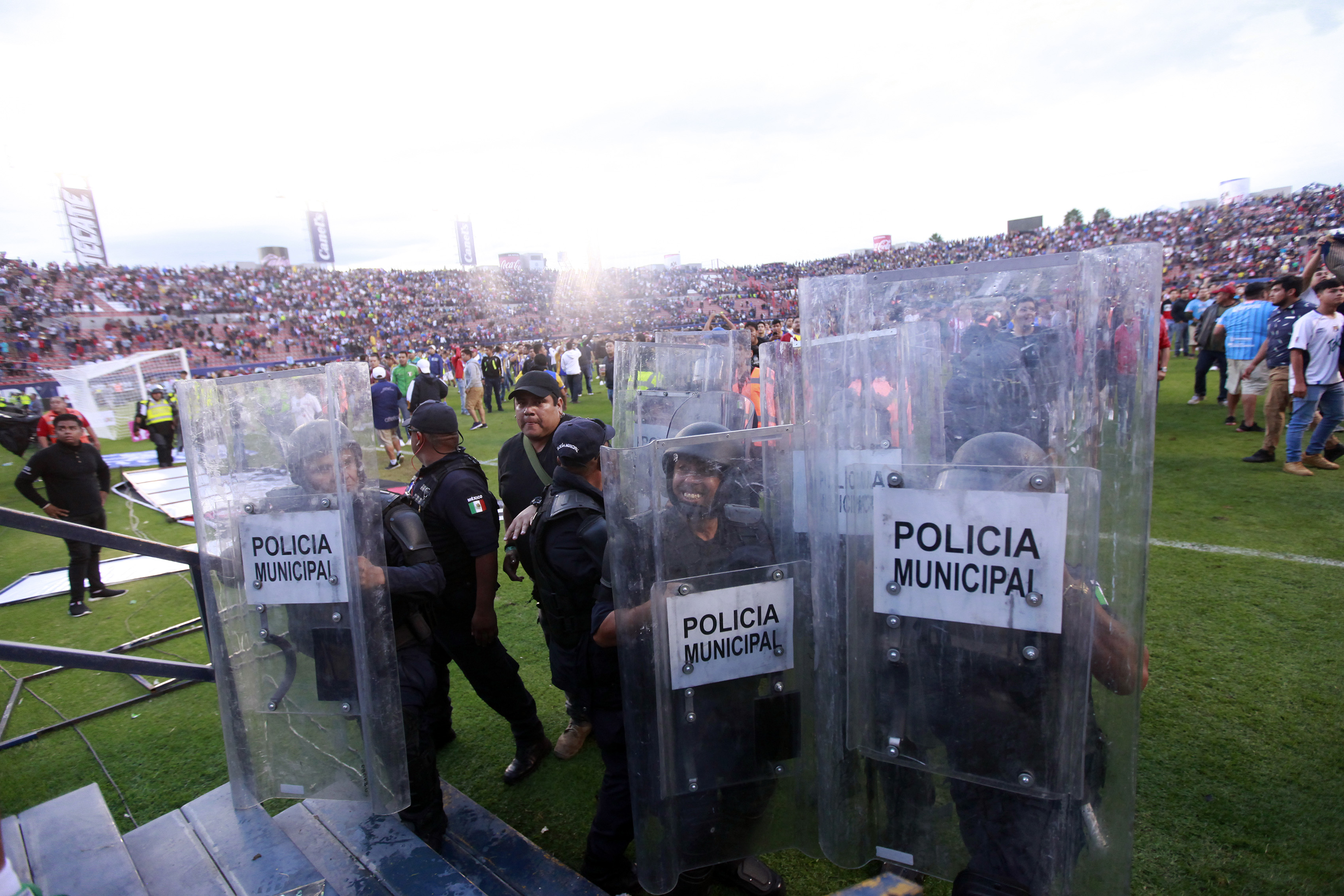 6 Riot police eventually weighed in to try and contain the chaosCredit: Getty – Contributor 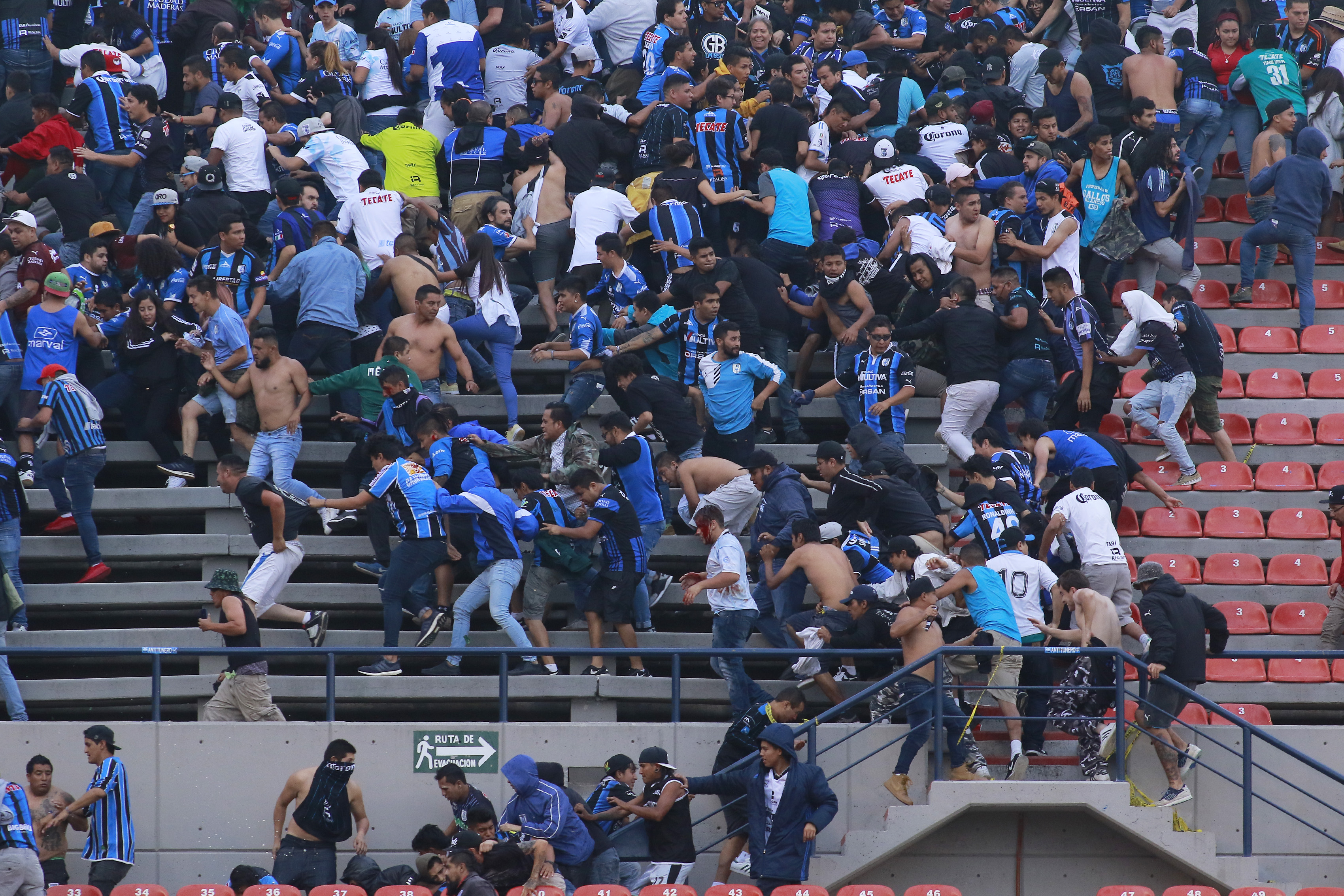 6 Hundreds of fans were involved in the running battles on the terracesCredit: Getty – Contributor