EDDIE JONES has likened England’s players to Samurai warriors — and the coach is certainly determined to live or die by the sword.

Yet if his selection gamble backfires in Saturday’s World Cup quarter-final against his native Australia, Jones will be likened to another type of Japanese fighting man. A kamikaze pilot. 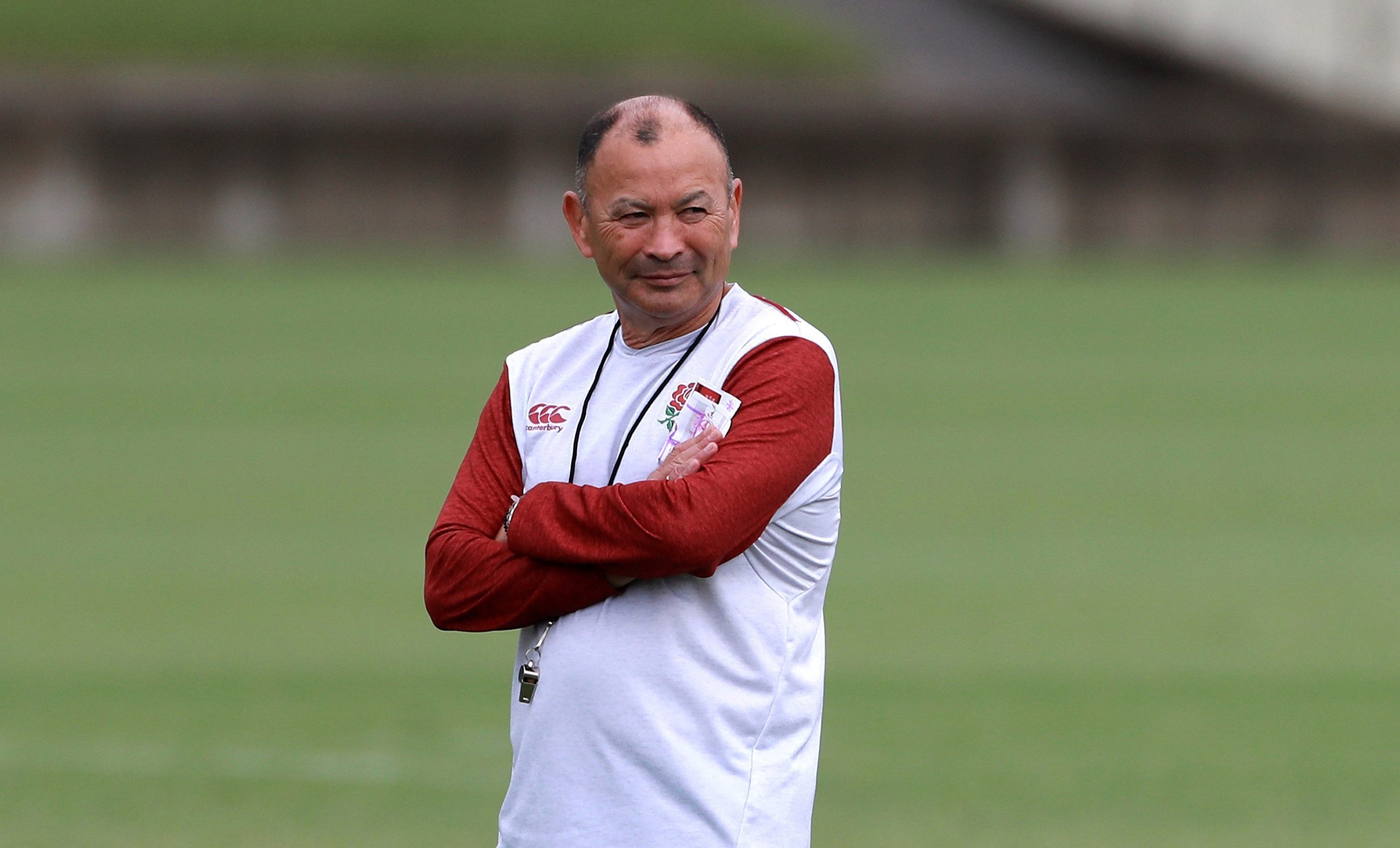 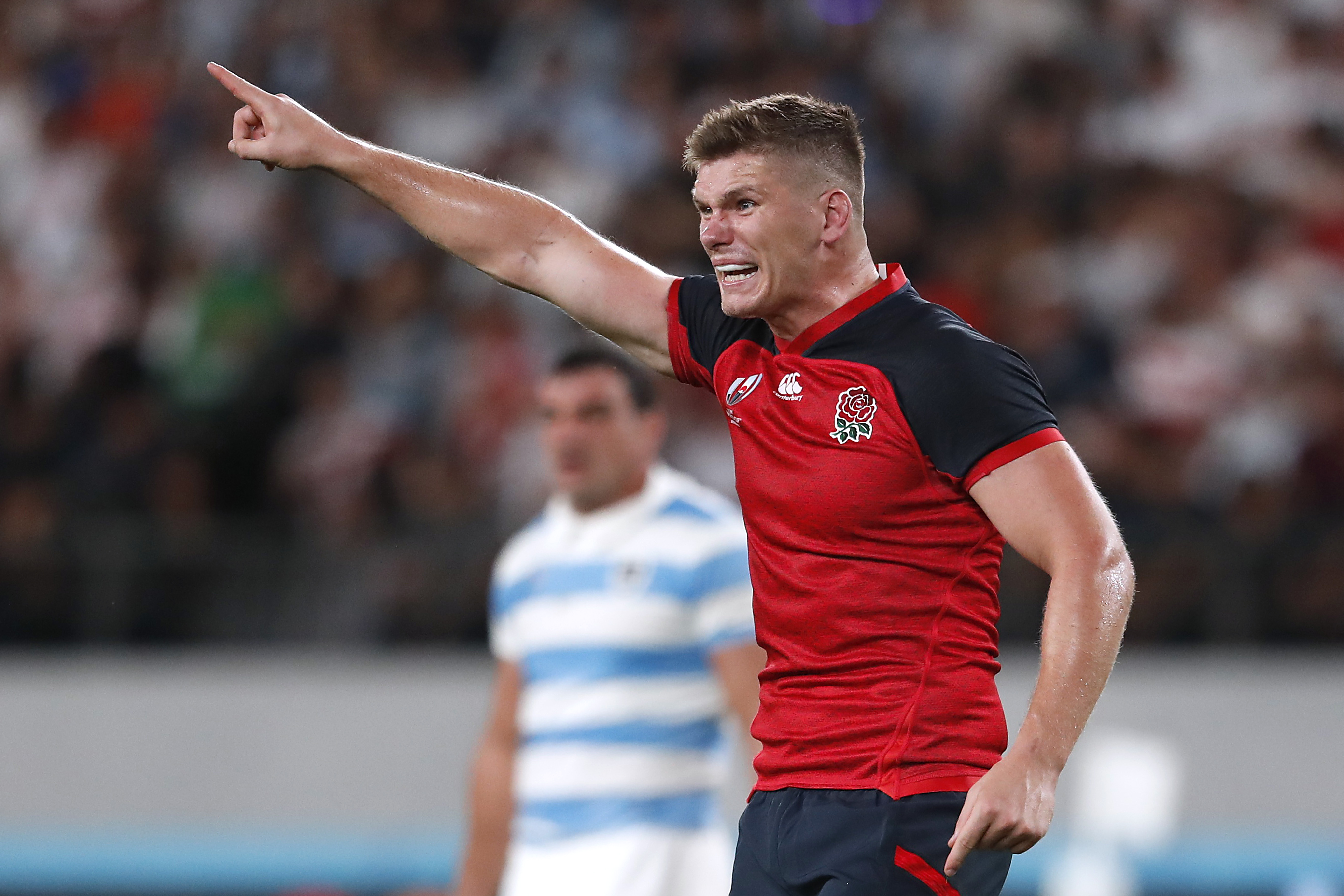 There are big calls and then there is dropping your in-form fly-half for a game of this magnitude.

If England are beaten in Oita on Saturday morning, Jones will be out on his ear and this choice will be his epitaph.

However much Jones tried to flannel it by claiming ‘finishers’ were as important to him as his starting XV, nobody was in any doubt of the significance of switching Owen Farrell to No 10, with Henry Slade partnering Manu Tuilagi in the centre.

George Ford has been outstanding at this World Cup, while Farrell’s form has been shaky.

Yet captain Farrell is being rewarded with a move to his favoured role, while Ford is dropped to the bench.

Jones even admitted he had needed to order Farrell, 28, to focus more on his own form than on his captaincy responsibilities.

He said: “Owen’s got quite a big job for us. He’s captain and he’s goal-kicker.

“The responsibility of being captain at the World Cup is much larger than normal matches because you’re bringing a group of 31 players together for eight or nine weeks.

MANU TUILAGI v SAMU KEREVI
TWO of the most destructive players at the World Cup. The clash of these huge gainline-breaking centres is the most mouthwatering match-up so far. England’s enforcer Tuilagi has already run over Tonga and Argentina, but the 17-stone Fiji-born Kerevi will be his toughest opponent to date.

‘CUNDERHILL’ v ‘POOPER’
TOM CURRY and Sam Underhill are Eddie Jones’ Kamikaze kids. But they face the legendary ‘Pooper’ — David Pocock and Michael Hooper. ‘Cunderhill’ have youth and energy on their side, ‘Pooper’ have World Cup finals experience in this intense battle of the breakdown.

OWEN FARRELL v CHRISTIAN LEALIIFANO
FARRELL is in his preferred position of fly-half — even though it has come at the cost of dropping George Ford. Lealiifano gets the nod after THREE different No 10s were trialled by Australia in the pool stages. Farrell will look to launch Tuilagi and Henry Slade but Lealiifano will mix it up.

“Owen’s the father of that group. His ability to delegate, to know what to say to players, is a challenging experience for a young guy like him. He’s coping with it really well.

“But I feel like sometimes, maybe earlier in the tournament, he spent too much time in the captaincy area and not enough on his own individual prep — but I’ve seen a real change in that this week. We did have a chat about it.”

Jones claimed that Aussie batsman Steve Smith was so prolific during The Ashes because he had lost the burden of captaincy — not that Smith wasn’t also the leading run scorer by a country mile in the previous Ashes, as skipper!

“It’s much simpler when you’re just a player. When you’re captain you’ve got more responsibilities and, as you go on as a captain, you learn how to get the balance right.”

JORDAN PETAIA is 6ft 3in, 15st-plus, has top speed, superb skill — and he is only 19.
The Wallabies wonderkid will be unleashed on England on Saturday at outside centre but he is no ordinary rookie.
Australia boss Michael Cheika said: “I trust Jordan infinitely — he looks good as gold.
“He’s pretty relaxed but he’s also very well prepared.
“I know the lad will rise to the challenge. He’s more than ready.”
Petaia became Queensland Reds’ youngest Super Rugby debutant when he was picked just 24 days after his 18th birthday.
He will be the first player born in the year 2000 to start a World Cup knockout game, but he did start on the left wing in the Pool D win over Uruguay.
After impressing in that match, he went under the radar in the win over Georgia a week later on the opposite wing.
He will also become Australia’s youngest Test centre since Jason Little 30 years ago.
Petaia’s attacking flair is clear but there are question marks over his discipline against England’s Manu Tuilagi and Henry Slade.
Aussie scrum-half Will Genia said: “Jordan can be one of the best players in the world in the not-so distant future.” 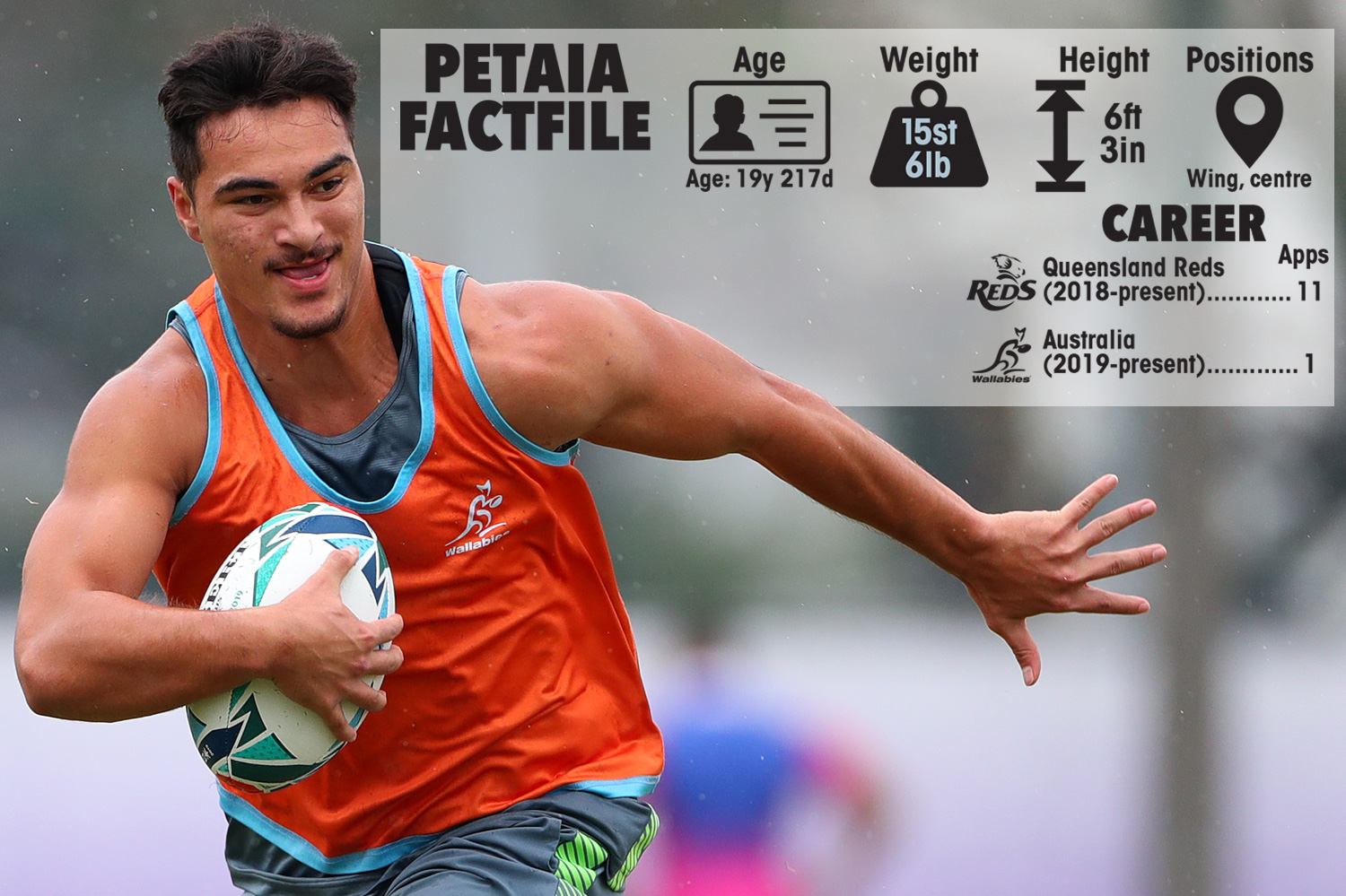 4 Petaia has only featured on the wing for the Aussies

When asked about Farrell’s qualities, Jones said: “He’s a warrior. He leads from the front. He competes, he’s tough.

“That’s what we’ve tried to produce in this team. We’ve got a tough team who compete hard. That’s the England style of playing.”

And Farrell admits he has had to make a point of focusing on his own game.

He said: “A big part of leadership is performing well, so a big part of your time should go into that.

“I think Eddie was just checking on me, making sure I am doing that, making sure that you’re not getting caught up in other things and making sure it is about doing all you can to play your best.”

Due to Argentina’s short-handedness and the cancellation of their final group match against France, nobody truly knows where this England team are at.

They have defeated the Aussies six times out of six under Jones but Michael Cheika’s team have improved and they hammered the All Blacks in August.

There weren’t many barbs from Jones towards his one-time team-mate Cheika, a man he has successfully wound up in the past. But there was an attempt to crank up the pressure on Aussie teenager Jordan Petaia, surprisingly chosen at centre.

Jones said: “I’ve seen enough of him to know he can play a bit but it’s going to be a big occasion for the boy.

LatestTEAMS ARE IN How will Ireland line up against New Zealand in Rugby World Cup quarter-final? WIZARD OF OZ Australia wonderkid Petaia to be unleashed vs England and can be best in world UR JOKING Uruguay's World Cup ends in uproar after squad allegedly vandalised a restaurant FORD FOCUS How England will line up vs Australia as Jones makes shock call to drop Ford FIT THE BIL Vunipola fit for England's World Cup showdown with Australia in major boost SponsoredTOGETHER IS BETTER The Mastercard Team Award has been won by Mitcham & Carshalton RUFC MAN IN THE MIDDLE Who is England vs Australia referee Jerome Garcia?

“He’s playing a quarter-final in front of 40,000 people in Oita where you know that you don’t get another day.

“For a young player, you can either rise to the occasion or you can find it difficult.”
Jones also won’t get another day should England bomb.

As he said — pointing up towards the hills above England’s hotel, where he reckons Samurais used to fight for their lives — this one is “do or die”. 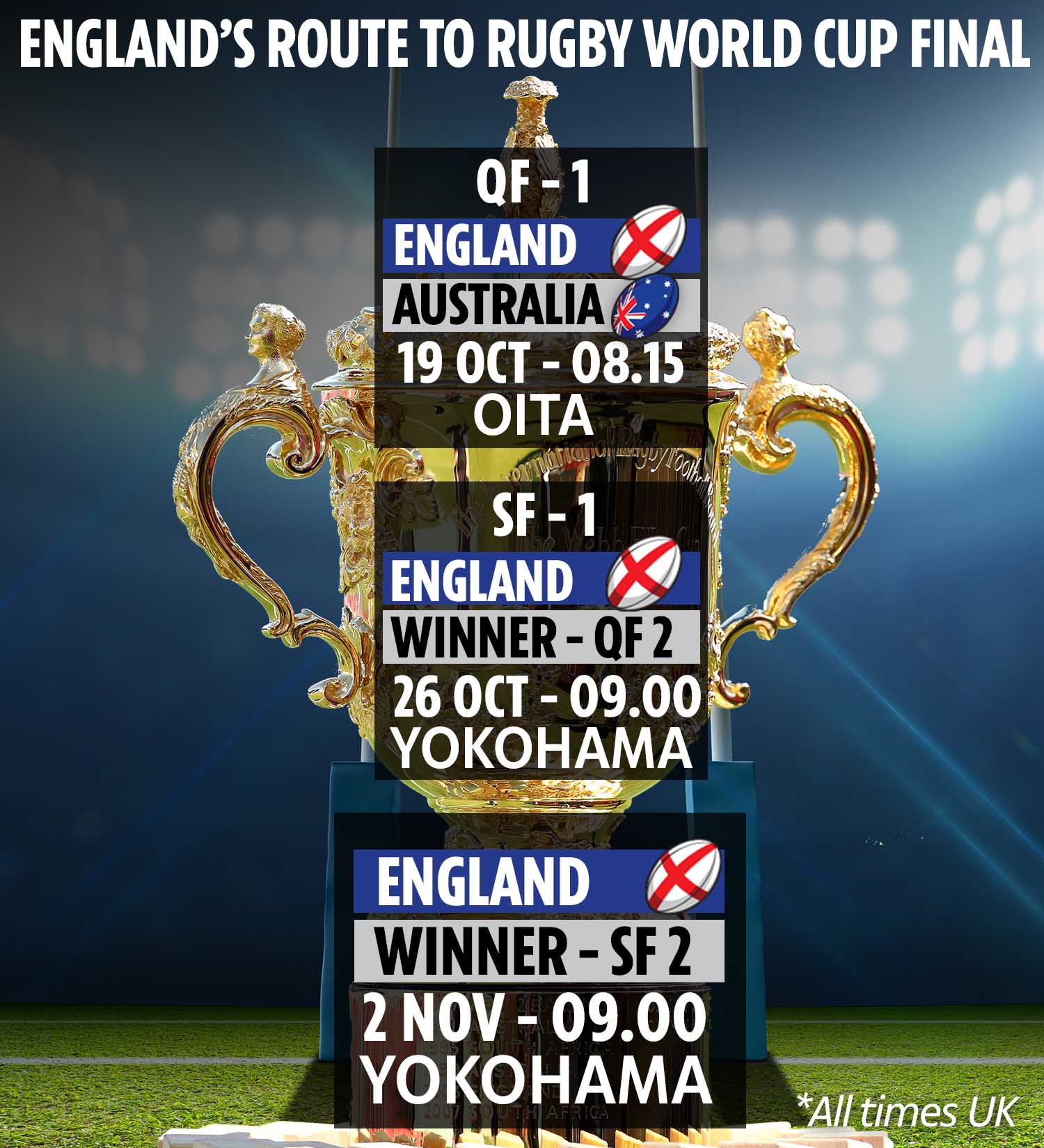