Kristaps Porzingis plans to be on the court for the Dallas Mavericks in the preseason after sitting out all of last season to recover from a 2018 knee injury.

Acquired from the Knicks at the 2019 trade deadline, Porzingis has not played in 19 months but he showed up to training camp with a new physique – at 242lbs, almost 20lbs up from his rookie weight – and no worries.

“Honestly, I feel great. In my mind I always wanted to come back when I was 110 per cent,” Porzingis said as the Mavericks opened training camp on Tuesday. “I didn’t want to halfway do it – maybe I’m good, maybe I’m not so [good]. So, I made sure I’m 100 per cent healthy and now I’m back.” 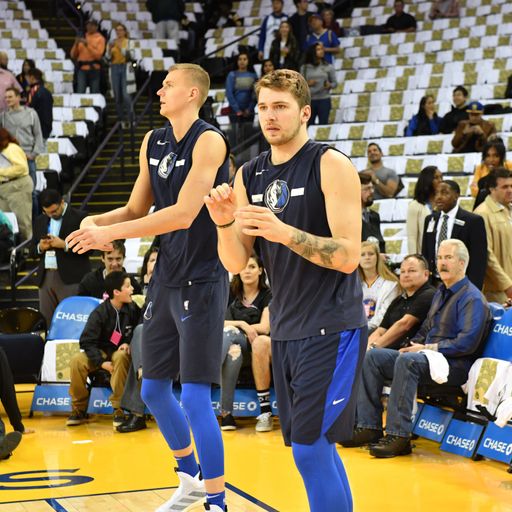 Porzingis tore his left anterior cruciate ligament on February 6, 2018, and surprisingly was part of the January 31 deal that helped the Knicks clear the books to make stronger bids for free agents in July.

But the Knicks were unsuccessful in bids for Kawhi Leonard, Kevin Durant and Kyrie Irving, and the Mavericks picture Porzingis, 24, as a pillar of the franchise going forward, along with Luke Doncic, the reigning Rookie of the Year.

“We’ve seen a lot of them in pickup games [this summer],” coach Rick Carlisle said. “They both have tremendously high level of skills, they compliment each other because Luka is great with the ball. KP, he can screen-and-roll, he can screen-and-pop, he can slip screens and catch and shoot, he shoots from long range, he drives the ball.

“Both of these guys can create problems on their own. When you get them together, we feel like they can create even bigger problems for opponents. And so far, watching them, there’s no reason they shouldn’t. They’ve had really good chemistry.”

The 7ft 3in Porzingis was an Eastern Conference All-Star before his injury.

At the time he went down, Porzingis had career averages of 22.7 points, 6.6 rebounds and 2.4 blocks per game.

“Of course it’s going to take us some time,” Porzingis said. “We’re not going to come on the court and play like we’ve played [together] for 10 years already.

“But I feel like with the type of personalities we have and where we come from – we’re both Europeans, we both speak Spanish – all those things are going to help for us to build a chemistry on the floor.

“Just knowing how selfless Luka is in sharing the ball with his team-mates and making everybody better, I have no doubt we’ll find that connection sooner or later.”