Zion Williamson has thoroughly enjoyed his jet-setting, appearance-making first offseason as a pro.

The Pelicans’ top overall draft choice suspects he will like his first training camp even more.

“It has been crazy and fun. Always on the move,” Williamson said on Monday of the months since he left Duke for the NBA. “I think when people look at what I’m doing, they’d say it’s very stressful, but I’m having fun with it.

“Bouncing from city to city, sitting in three-, four-hour meetings, listening to people trying to pitch you on their company. It’s a lot, and only having like an hour or two to try to get in the gym and then hop back on a plane and go somewhere else,” Williamson continued. “But for now, that part has slowed down a lot. For now, it’s just focusing on the Pelicans.” 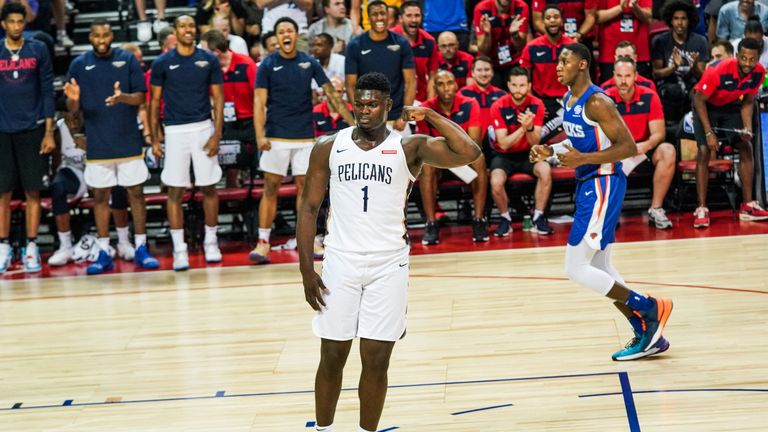 Image:
Williamson flexes during his Summer League debut for the New Orleans Pelicans

In recent weeks, Williamson has increasingly been working out at Pelicans headquarters with trainers, focusing on core strength exercises and flexibility more so than traditional weights. David Griffin, the Pelicans’ new executive vice president of basketball operations, said more muscle mass is not something the 6ft 7in, 285lb Williamson really needs to become a more effective player.

Williamson also has been participating in voluntary practices.

“That’s the best part. That’s what makes all of this other stuff possible,” Williamson said. “What I do on the court, in between that rectangle, that’s where my love comes out. That’s my passion.”

Veterans on the Pelicans are generous with their praise of Williamson’s athletic ability and skill; guard Jrue Holiday used the term “mutant.”

At the same time, there is an apparent concerted effort to manage expectations for the hyped 19-year-old rookie.

“His athletic ability is out of this world, but I do think he has a lot to learn and we’ll do a good job of bringing him along,” Holiday said. 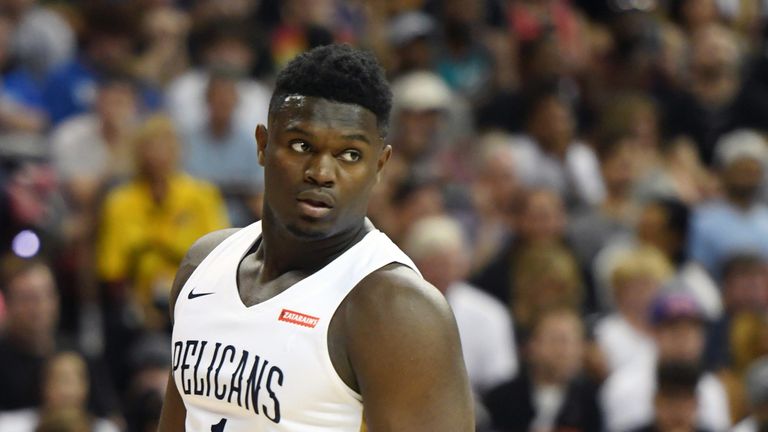 Griffin called Williamson a “genetic freak,” adding, “We’ve seen him as a basketball player do some shocking and stunning things, but right now it’s just about finding some consistency in what it is he can give us.”

Coach Alvin Gentry put it this way: “He is not here to save our franchise. He is here to be a part of something that ‘Griff’ has referred to as sustainable winning. He’s going to be a guy that contributes, but we’re not going to ask him to put on a cape.”

With his affable disposition and ability to propel his hulking frame well above the rim for thunderous dunks, Williamson has been a social media phenomenon since high school.

The Pelicans, who missed last year’s playoffs and seemed to be in a downward spiral when Anthony Davis demanded a trade last February, are now slated to appear in about 30 nationally televised games.

“This is a guy that has had a following since he was 14 or 15 years old and he is really maybe arguably one of the first guys in this new generation of high school players that have had this level of exposure because of social media at his age,” said guard JJ Redick, one of five former Duke players on the Pelicans. 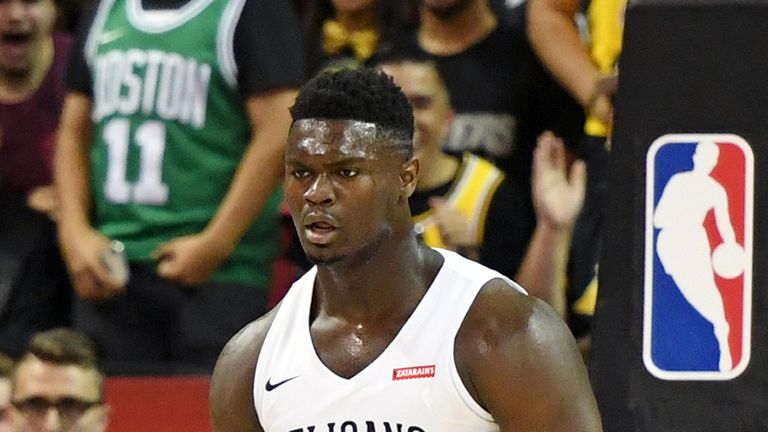 For Williamson, the highlights of the offseason entailed meeting with young fans who encouraged him to try a variety of acrobatic dunks, such as putting the ball between his legs on the way to the rim and finishing with a reverse jam.

Williamson said he just wants to make sure his dunks go in, but said he appreciated the enthusiasm.

“When you hear that from a little kid, it’s different,” Williamson said. “He really means that, so it fuels me to work harder.” 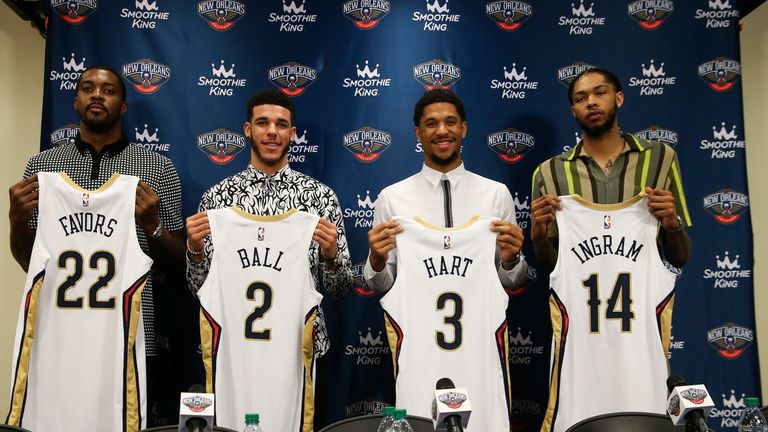 When the Pelicans traded Davis to the Lakers in June, all three players they received in return were coming off injuries. Forward Brandon Ingram was sidelined by a blood clot in his arm; point guard Lonzo Ball had a left ankle injury and guard Josh Hart was recovering from a patellar tendon injury. All three said they are healthy now and ready to open camp without limitations.

“It’s been a long summer,” Ball said. “I’m happy I can finally play and do everything I want.”

Ingram added that he is no longer on medication related to his bout with deep vein thrombosis. 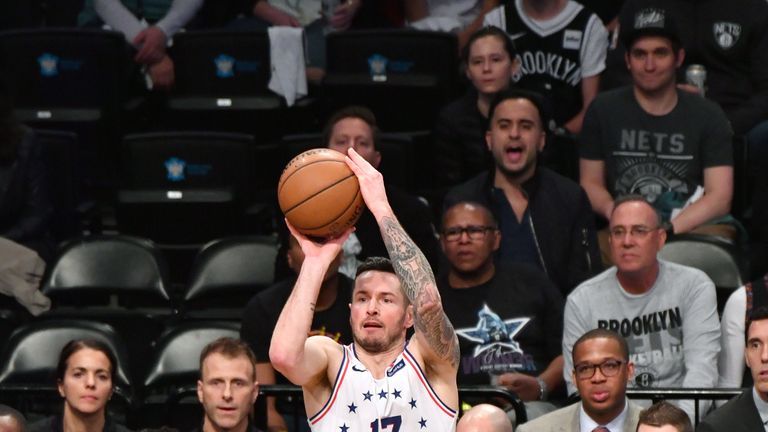 Redick has been to the playoffs for 13 straight seasons with four different teams and said he expects to make it 14 – even though New Orleans have gone through a roster overhaul and are developing three first-round draft picks: Williamson, center Jaxson Hayes and guard Nickeil Alexander-Walker.

Redick said he mentioned his personal playoff streak when he had his first extended chat with Williamson after a recent workout.

Williamson chuckled at his recollection of that moment.

“He had just given some great advice – and then the whole mood shifted.” 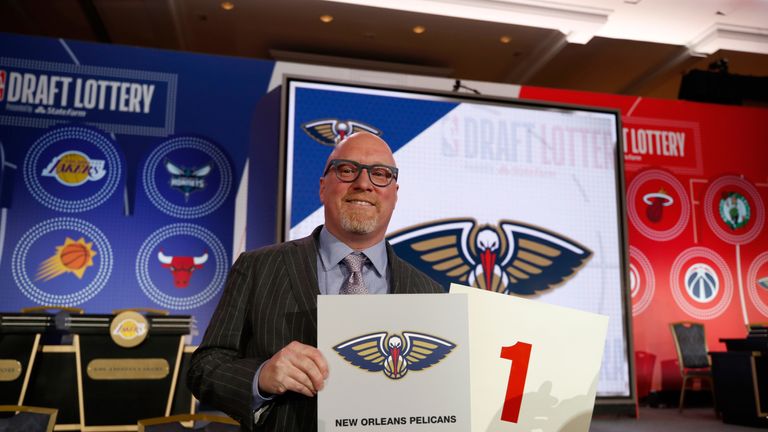 Image:
David Griffin poses after the Pelicans won the right to pick first in the 2019 NBA Draft

While Griffin avoided discussing goals for this season in terms of a number of victories or postseason play, he also sought to establish a competitive tone.

“We’re here to beat people’s [butt],” Griffin asserted. “But we’re young enough that we may not be able to deliver on that every day, and we have to deliver on getting better.”