SIR ALEX FERGUSON has his stand but that is all that is left at Old Trafford of his legacy. The rest is gone.

As he watches down from the Directors box he must wonder what has happened to his Manchester United and how 27 years of hard work can have whittled away to nothing so quickly. 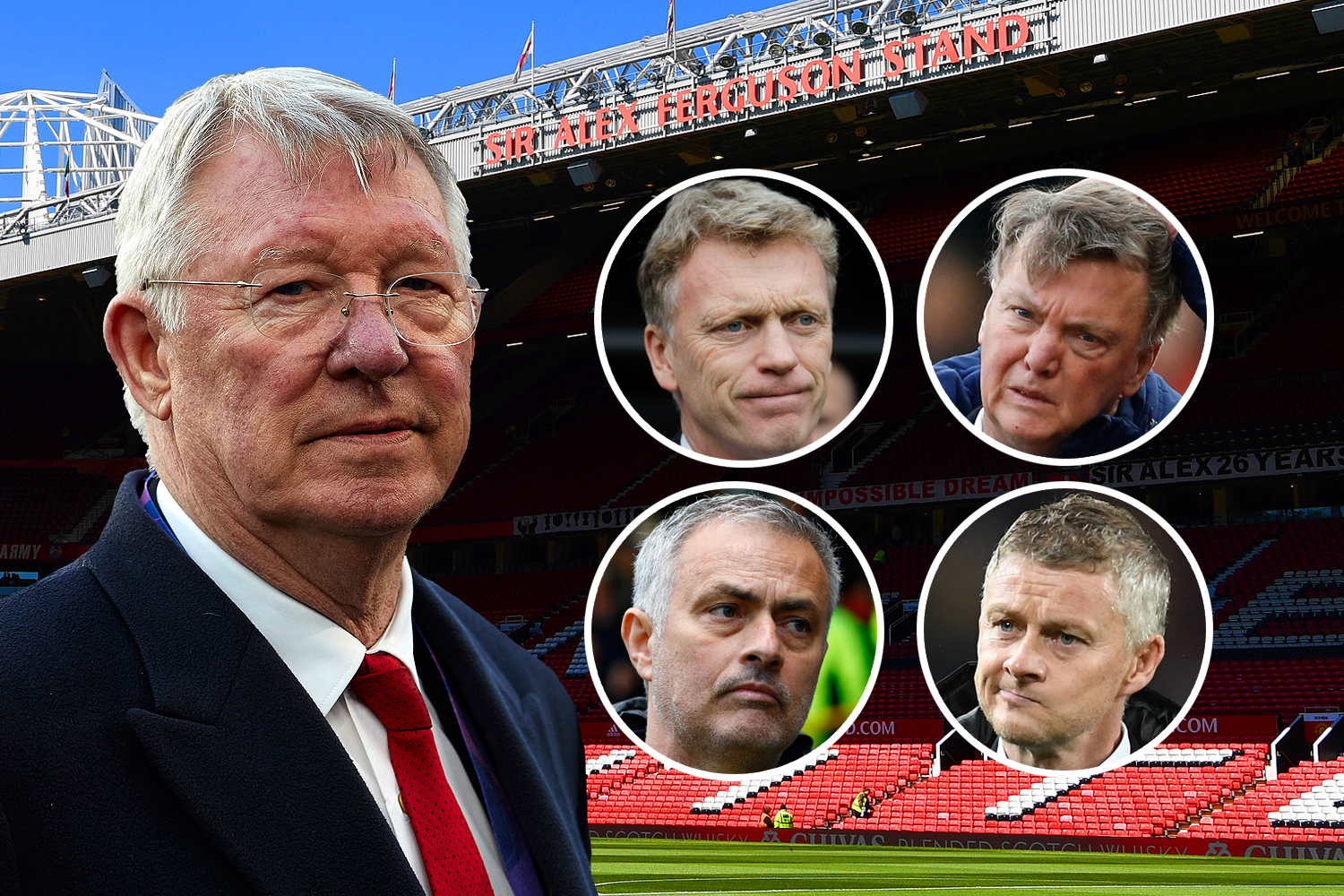 3 Ferguson's legacy has completely unravelled after six years of misery at Old Trafford under Moyes, Van Gaal, Mourinho and Solskjaer

Make no mistake the club is right back to where it was before he arrived.

The fear factor inside the stadium has gone. The swashbuckling football is nowhere to be seen.

The sense that they are even relevant when it comes to fighting at the top tier at home and in Europe is lost.

The trophy cabinet he kept well stocked is now empty.

In fact they are probably further away from being a credible title challenger now than when Big Ron Atkinson made way for the Scot.

The attempts to cling on to the shirt tails of Sir Alex’s reign have all failed.

The problem is when he went, everything went with him. What United were was all in his head and carried on his shoulders.

There was no huge database, text book or video to show the next man the way. It was down to him.

Nobody has really enjoyed themselves here for quite some time. Gradually everything Fergie did has been unpicked.

To be fair if every subsequent manager was going to be able to replicate what he did, then he can’t have been that special after all.

But with every chop and change in style and direction what United were has been completely lost.

Sir Alex really kept it simple. In his day he very rarely spoke about the opposition. They would only have a plan to contain a certain individual if he was exceptional.

It was all about what United could do to the opposition.

Often his last words before the team would run out onto the pitch would be ‘right, go and enjoy yourselves’, simple as that.

The very fact Louis van Gaal changed the office next to the dressing room where Sir Alex would entertain guests and opposing managers with red wine and laughter with an analysis room tells you everything.

Nobody has really enjoyed themselves here for quite some time, certainly not on Monday night as the game with Arsenal morphed into a sorrowful shadow of former meetings.

Gradually everything Fergie did has been unpicked.

There were still remnants of the football played when David Moyes took charge, but it was an ageing team and the respect for the manager’s position had gone now Sir Alex was no longer there.

Van Gaal bamboozled the players with science and did not let them think for themselves.

Jose Mourinho stabilised it and made them a team to reckon with, but the football wasn’t good enough for many fans and behind the scenes things became toxic.

Ole Gunnar Solskjaer offered early hope. Hope that the days of Sir Alex could be replicated by one his stars who studied the managers methods.

Now he is drowning in the enormity of the task and of the club.

Solskjaer’s concerns for what is happening at the club has started to make him quite a defensive manager from that opening honeymoon period.

Everyone was back in the box for a Rochdale corner last week.

3 Man Utd are arguably in worse shape than when Fergie took over in 1986Credit: Alamy

3 The fear factor at Man Utd has gone – and with it their title challenging abilityCredit: PA:Empics Sport

Their nine points from the opening seven games represents their worst start to a season in 30 years. It is all going wrong.

Sir Alex had kept the footballing monster he created under control, all in his grip.

To give a small example the first move United made after Ferguson left was to send out a message that exciting news was on the way.

What was it – they were releasing their own Twitter site. They wouldn’t have done that with him there.

The football club quickly became a marketing machine when his iron grip loosened.

You could argue in defence of executive vice-chairman Ed Woodward that he was simply tapping into opportunities United had ignored to bring capital in, because plenty has been spent.

Along the way though the eye has literally gone off the ball.

Sir Alex left with the Premier League trophy in the cabinet and it is questionable when it will return. It is six years and counting – and you can make that seven by next May.

The best hope for this side this season is a top six finish, yet bets are already being laid on them finishing in the bottom half.

They are currently tenth, that’s about right. They are just a very ordinary team, with an extraordinary history.