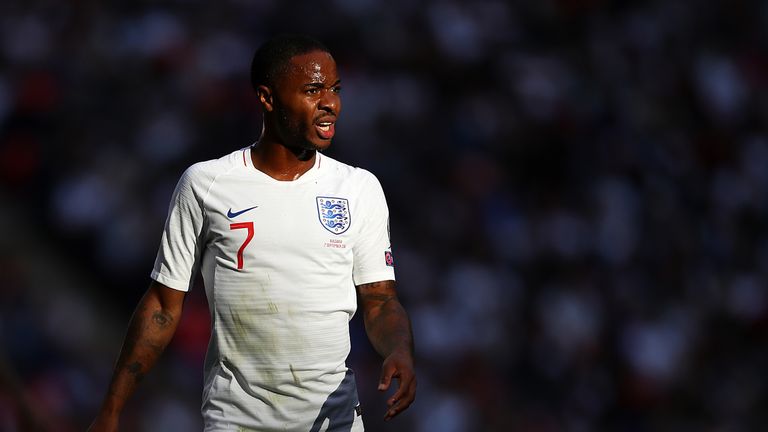 Raheem Sterling was the target of alleged racist abuse from a Bulgaria fan during England’s Euro 2020 qualifier at Wembley.

A steward is said to have heard the individual in the away section of the ground during the match on Saturday, and the person was subsequently ejected and handed to police.

The Metropolitan Police confirmed a male was arrested and taken to a north London police station on suspicion of an aggravated public order offence. Following enquiries, he was released with no further action.

An FA spokesperson said: “We can confirm that an individual, who was seated in the away section of the stadium, was ejected and subsequently arrested for discriminatory abuse during the England v Bulgaria match.

“Wembley Stadium operates a zero tolerance policy on anti-social and discriminatory behaviour and anyone found guilty will be ejected and reported to the police.”

Sterling has been the subject of racist abuse from supporters inside stadiums on multiple occasions, including during March’s Euro 2020 qualifier in Montenegro along with other England team-mates.

The 24-year-old called for action on the Montenegrin FA and UEFA subsequently ordered their following home game to be played behind closed doors, as well as issuing them a £17,000 fine.

And the Three Lions make the trip to Bulgaria next month for the first time since victory in September 2011 was overshadowed by racist abuse in Sofia.

Ashley Young was subjected to monkey chants during that game, but the Bulgarian Football Union (BFS) was hit with a £34,000 fine by UEFA for “discriminatory” chanting and for the lighting and throwing of fireworks.

The Natsionalen Stadion Vasil Levski will be partially closed for England’s latest visit due to the racist behaviour of their supporters during defeat in the Czech Republic in June.

The BFS is required to block off at least 5,000 seats for the visit of Gareth Southgate’s side and display a banner with the wording ‘#EqualGame’.