LeBron James enjoyed his best night in an LA Lakers uniform on Sunday night with a 51-point showing against his former team in Miami, while the Golden State Warriors slipped to their third straight loss. 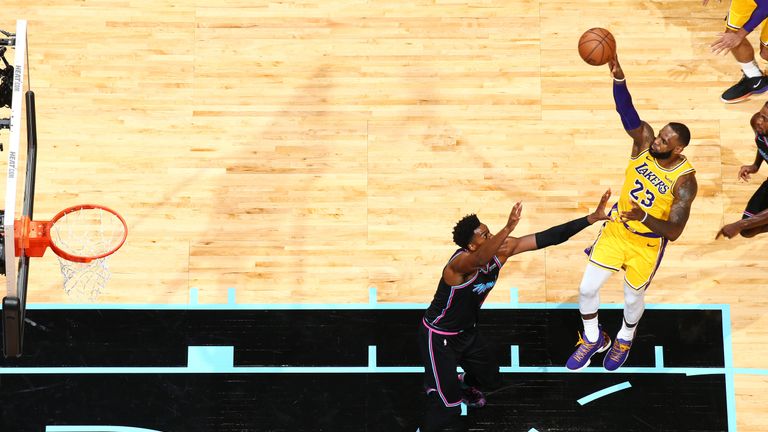 Highlights of the Los Angeles Lakers’ visit to Miami Heat on Sunday November 18.

LeBron James poured in a season-high 51 points as the Los Angeles Lakers beat the Miami Heat 113-97 in Florida.

James, who won four Eastern Conference titles and two NBA championships in four years with Miami, made 19 of 31 shots from the floor, including 6 of 8 from beyond the arc to punish his former team.

He added eight rebounds, three assists, two steals and one block to his line, with the Lakers a plus-20 during his 38 minutes on court.

The Lakers, who have won five of their past six games following a slow start to the season, also got a season-high 19 points from reserve Kentavious Caldwell-Pope. 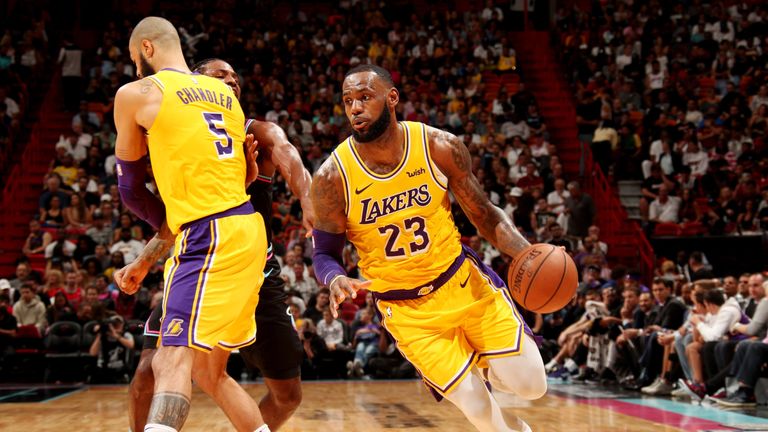 However, Richardson was upset with the officiating and was ejected from the game in the fourth quarter after throwing one of his trainers into the crowd. Heat coach Erik Spoelstra also got hit with a technical foul in support of his player.

The game marked the season debut for Heat forward James Johnson after recovering from hernia surgery, but Miami were without injured starting point guard Goran Dragic, who leads the team in assists and ranks second in scoring.

The Lakers, who led by as many as 18 points in the first half, stretched their advantage to 92-76 after three and cruised in the fourth. Highlights of the Portland Trail Blazers’ visit to the Washington Wizards on Sunday November 18.

Damian Lillard scored 40 points and CJ McCollum added 25 as the visiting Portland Trail Blazers held on to beat the Washington Wizards 119-109 on Sunday.

Portland led by as many as 29 points in the third as Lillard drained 19 of his points in the quarter, but the Wizards went on a 10-2 run to pull within 91-70 to start the fourth. The Trail Blazers then pushed the lead to 25 on a Nik Stauskas three-pointer early in the fourth, but Washington’s reserves closed strong against the Portland starters, and the Trail Blazers’ lead shrank to as few as eight points in the final minute after Kelly Oubre’s three-point play.

However, Austin Rivers missed a three-pointer with 32 seconds left and Portland scored the final four points of the game.

John Wall had 24 points for the Wizards, and Oubre added 19. Jusuf Nurkic had 13 points and 14 rebounds for Portland, who had lost two straight. 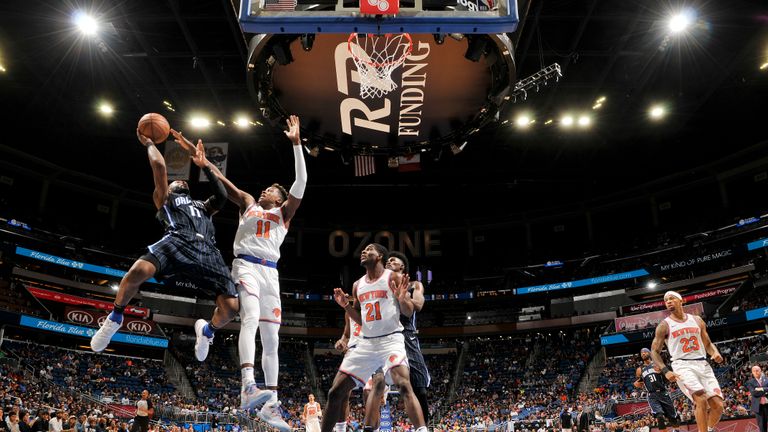 Highlights of the New York Knicks’ visit to Orlando Magic on Sunday November 18.

The Orlando Magic rolled to their third consecutive victory with a wire-to-wire 131-117 win over the New York Knicks.

The Magic saw their 18-point, first-quarter lead shrink to just one by half-time, but they then scored the first six points of the third and were able to hang on for the rest of the game. 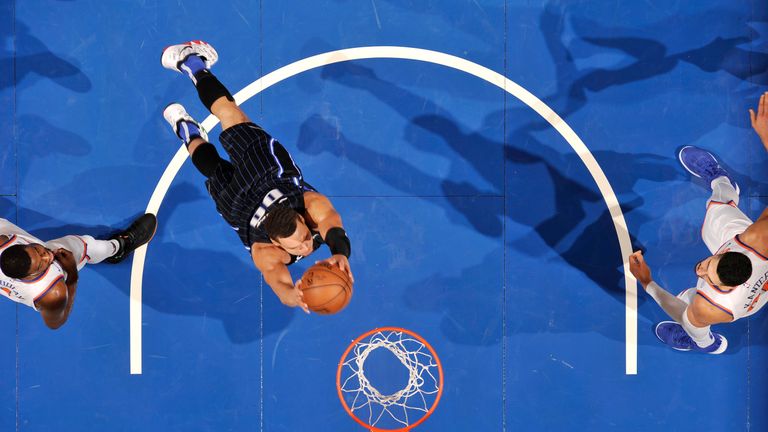 Image:
Aaron Gordon leaps to score two of his season-high 31 points for the Magic

Enes Kanter had 10 points and 11 rebounds in the second quarter alone and finished with 21 points and 19 rebounds for the game.

Orlando are now 7-2 in their last nine games having opened the season 2-6. Highlights of the Golden State Warriors’ visit to the San Antonio Spurs on Sunday November 18.

The Spurs were forced to do it the hard way in order to snap a three-game losing streak and in doing so condemn the Warriors to their third straight loss.

Golden State continue to be without talisman Steph Curry with a groin injury.

San Antonio led just 91-90 after a three-pointer by Klay Thompson with 3:38 to play. 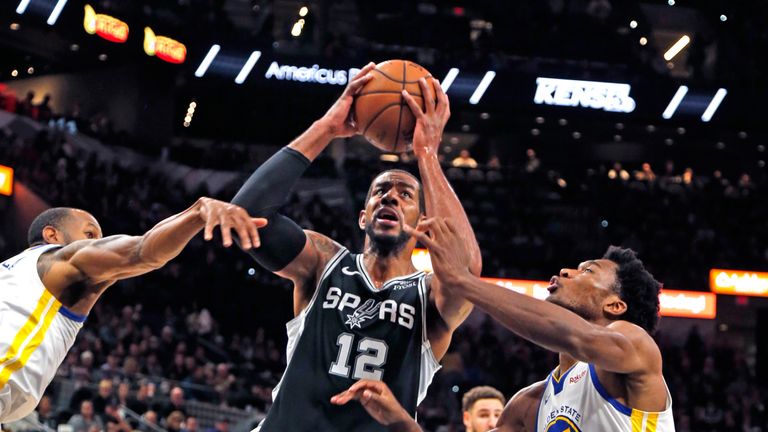 But they forged a 6-0 run off a basket by DeRozan and baseline jumper from Aldridge – who then followed with a huge block at the other end – and two free throws from DeRozan that all but finished off the defending NBA champions.

Rudy Gay added 19 points, 15 of them in the first half, for the Spurs, who won for just the second time in seven games.

Marco Belinelli and Bryn Forbes scored 12 and 10 points respectively for San Antonio, while Kevin Durant led all scorers with 26 points. 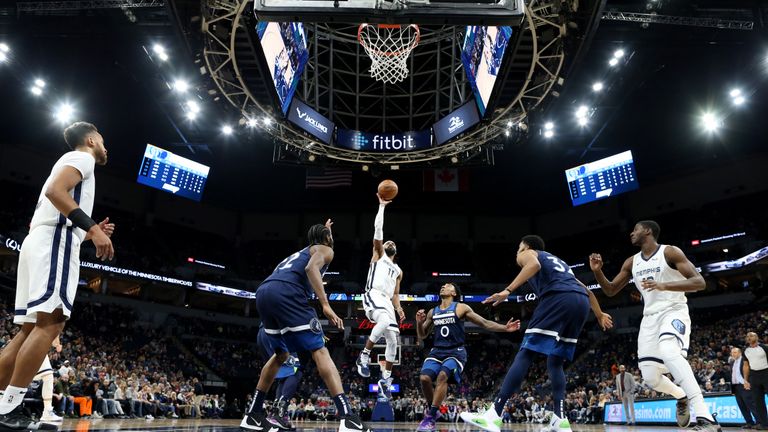 Highlights of the Memphis Grizzlies’ visit to the Minnesota Timberwolves on Sunday November 18.

Marc Gasol scored 26 points, grabbed 13 rebounds and made four three-point shots to lead the Memphis Grizzlies to a 100-87 road win against the Minnesota Timberwolves.

Mike Conley added 18 points and eight assists for the Grizzlies, who have won five of six and snapped Minnesota’s own three-game winning streak that followed the Jimmy Butler trade to Philadelphia. 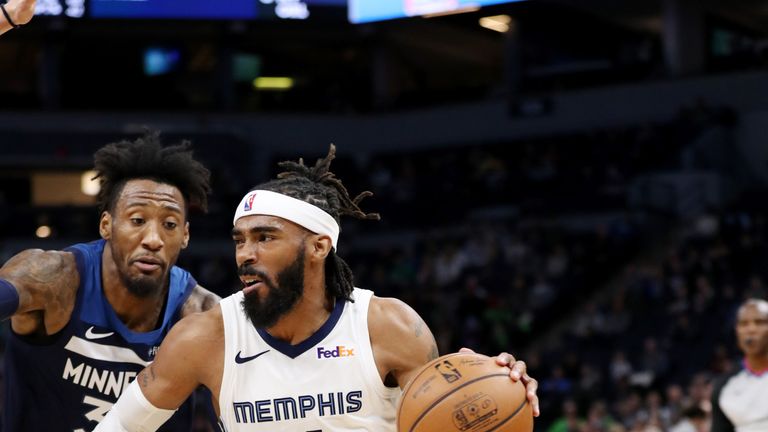 Image:
Mike Conley had 18 points and eight assists for the Grizzlies

The game broke open in the third quarter as the Grizzlies capitalised on an error-strewn night from the home side – they had 20 turnovers on the night – and outscored their opponents 28-19.

Derrick Rose kept the Timberwolves in the game, scoring 18 off the bench, while Dario Saric also gave Minnesota a lift off the bench with 14.

And www.skysports.com/nba will be your home for news, reports, video and features throughout the season while you can follow us @SkySportsNBA